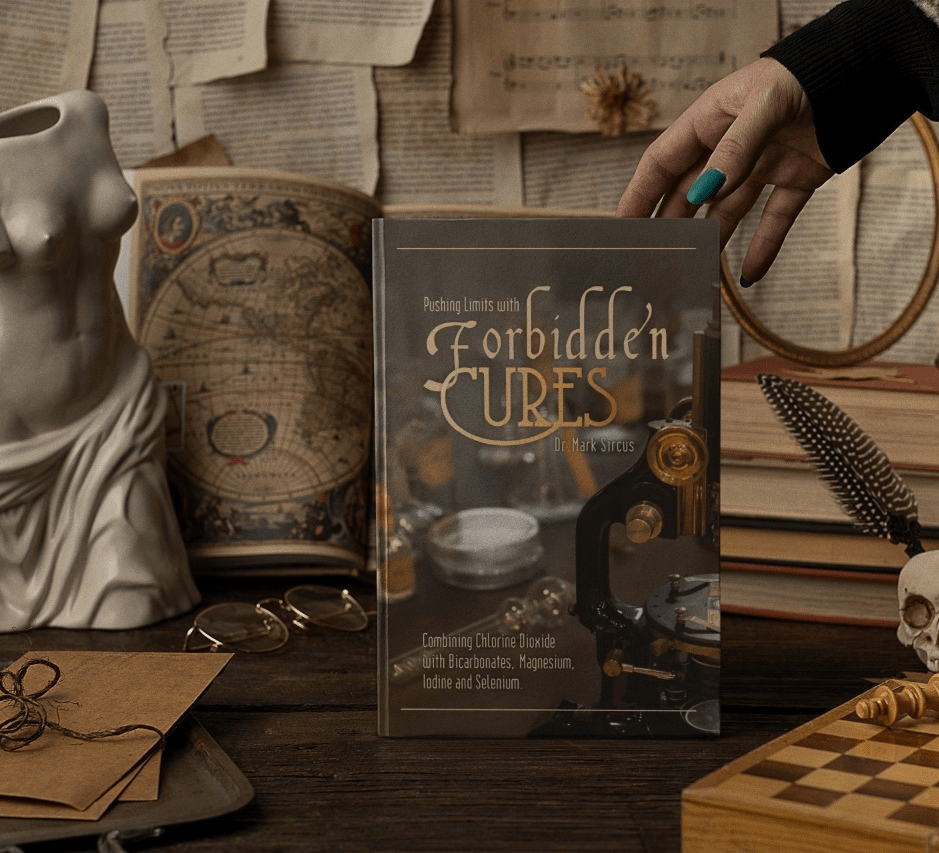 Forbidden Cures is a crash course in medicine and intensive care. It is a revolutionary medical approach that is easy to learn and practice at home and is safer and more effective than pharmaceutical medicine. Forbidden Cures brings coherence back to medicine just as death rates are going off a cliff. Death rates increased 40% last year according to life insurance companies. Could it have anything to do with the fact that five billion people were injected with genetic vaccines?

Importantly Forbidden Cures offers hope for those suffering blood damage from spike proteins. It also provides logical treatments for the avalanche of infections and strange diseases that are springing up with no clue as to what is causing them. It is incredibly hurtful that mainstream medicine does not want to know the actual causes.

All medical approaches that preceded the era of COVID vaccines are obsolete. None of them can address spike proteins. That was true of my Natural Allopathic Medicine until February of 2022. Then, I reorganized my entire treatment approach by making chlorine dioxide the Tiger Tank of my protocol.

Because we all need assistance and support when exploring new treatments, I am forming a low-cost group that one can subscribe to. Join others on a medical adventure where you can Study and Practice my Natural Allopathic Medical System in its most up-to-date form.

The group will offer opportunities to communicate on levels not usually seen in online groups. I will have a team of people helping me, and of course, we will all be studying and practicing together, learning how to help each other and those we love. It is a beautiful form of medicine we propose, and isn’t that precisely what we need?

The group will be comprised of people who are my private clients and those who just want to read, study, and practice the protocols from Forbidden Cures. It will also, I believe, be an exciting opportunity for long-time readers and followers of my work to engage with me dynamically.

I intend the group to be not only an adventure in healing and medicine but also an adventure in consciousness, to go where no other group has gone before at one of the most challenging moments in human history.

Whatever happens to you, no matter how severe, this book offers immediate lifesaving answers. Of course, the treatments in Forbidden Cures will not “cure” or save everyone’s life. However, the protocols will help anyone still breathing.

You will find in these pages a core protocol to treat cancer, vaccine damages, COVID, antibiotic-resistant infections, fungus diseases, Lyme, and treatments to get out of the hell diabetes brings. In addition, this approach treats neurological disorders, malaria, burns, and more things than I can mention in one paragraph.

If healthy or sick, the protocol serves as an advanced anti-aging treatment. For athletes, it will turbo-charge them. It helps us be all we can be, no matter who we are.

So, join my team and me in a quest for health—a human adventure. I hope the group will be a buttress against adversity for its members and a platform for positive and rational healing actions to ensure our health and happiness.

There is no chance that pharmaceutical companies will develop drugs to treat conditions and infections caused by spike proteins. They do not have anything for vaccine damages except their fantasies that there are no vaccine damages.

Everyone is invited to join the group, both professionals and patients!

The book comes free to those who join because it is required reading for group membership.

Not only your ethics, or your mind, or your dick!

The English use the phase, mostly, to refer to ethics, meaning that one is bent away from the establishment promoted social normal, that one has criminal tendencies. The Russians and the French use the phrase to mean one’s mind is slanted away from the speaker’s perception of the norm. The Americans don’t really have a consensus on the phrase, but, in some regions, it means to be ‘sexually deviant from normal’, though, at a locker room level, it refers to one’s dick.

All of LIFE is bent.

Life has chirality…or ‘hand-ed-ness’. This means that the molecular structure formed by the elements under examination have a ‘bent’ to either the left, or the right. They are either left-handed, or right-handed, in their tendencies in the process of formation, or alteration. So far as the examination has progressed, only elements involved in Life, have handedness. It may actually be that asymmetry is THE distinguishing feature of Life. This has yet to be falsified.

Inanimate matter, such as the general state of crystal formation among metals, and stones, does not have chirality. These crystals form linear structures without twists at a molecular level. This is unlike all the molecular structures in you body.

Inanimate crystals form linear structures, while crystals which are formed from Life created material, do have chirality, with a preponderance of L- bent molecules. As an instance, granite has crystals that are linear, whereas sugars have chirality within their crystalline structure.

Mostly, that is for humans, and most mammals, our molecules are bent left. There are some, such as vitamin E, which are bent right, but they are the very rare exceptions within mammalian patterns. This is why you see all the pharmaceutical grade amino acids labeled as L-, as in L-Arginine, or L-Cysteine.

We do observe that reptiles have much higher levels of R- (right bent) molecular structures than do mammals.

We find that, as a necessity for supporting Life, the green plants produce a majority of their energy transformation & transport molecules as L- structures. Green plants are obviously made to support the Life up-chain. As a general rule, plants with high R- bent molecule production are not favored by animal life.

We also find that most of the ‘native’ poisons to life, are R- molecular structures. This is especially noted in the most virulent, naturally occurring (produced by Life) poisons such as venom of all kinds. We also note that most of the inanimate poisons, that is, molecules that are not involved in Life processes, have an R- bent tendency IF the structure has chirality.

Vernadsky’s work on the Biosphere concept & details also notes that chirality, found throughout geochemistry, is a ‘Life specific’ indicator. Thus it is possible to know, looking at mineral deposits at the molecular level, if Life was involved in the process of their formation. Which, if chirality is discovered, has so far, always been the case.

Now really the ‘bent’ aspect of molecular structure is only ‘bent’ when viewed as a 2-D image. In three dimensions, the ‘bent’ is really a ‘twist’. The formation of the Life molecules ‘twist’ from the base towards the Left, or Right, but do not, ever form linear blocks. Life is 100% asymmetric.

IMO, it is this chirality nature of our molecules that allows for Life to falsify the Second Law of Thermodynamics. This physical law is not so much a Law as it is a general rule applicable to ONLY inanimate materials. The 2nd thermodynamic principle states that ‘objects (matter, systems) tend to run down to a steady energy state’.

Anyone who has ever been around a small child, or young animal, knows this does not apply to Life.

Life is capable of summoning energy from some ‘place’ that is not readily apparent, nor easily located/examined, and transforming that energy within our Matterium. These ‘energy reserves’ of Life, that we all live with, and depend upon, and even comment upon (Young Mother Lifts Car to Save Toddler – that kind of thing) as ‘extra-ordinary’, are, in fact, a key (KI CHI PRANA) aspect of being Alive.

All of the above causes the Malthusians, the “limits to growth” people, to have conniption fits when their ‘absolutes’ are broken by Life, and they are not able to explain the circumstances that they clearly observe. It would seem that though they are alive, they are blind to Life.

Again, IMO, we humans can use the L- bent nature of Life, and its transformation of energies, to locate other Life in far distant locations in our galaxy. The absence of ‘entropy residue’ in the form of steady state energy levels is our clue.

The REALLY INTERESTING part of our exploration of the biosphere we inhabit, is that we find chirality in molecular structures of stuff settling on Earth from Space. If only Life produces chirality, then what are we to conclude?

It is also interesting to note how the idea of chirality affects the abstractions of humanity. That is, the political labels that the name-stealers apply to themselves favor being ‘leftists’, when such a descriptor is actually the opposite of their particular political ‘bent’ as they are demonstrating themselves to be opposed to Life at all levels. Basically they are R- molecular in their thinking, though they wish everyone else to think they are the L-ife affirming ones….

Life… it’s ever so Twisted.