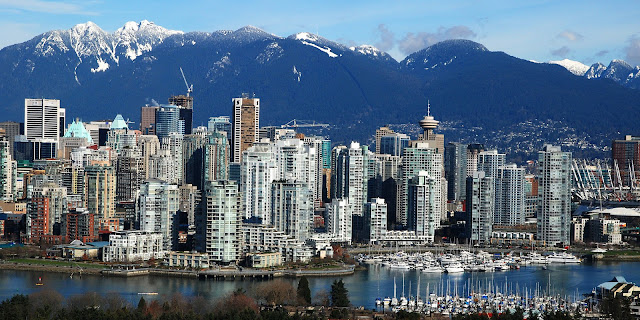 One year ago, when we first started discussing the Vancouver housing bubble, which as we first speculated – and was later confirmed – was the result of Chinese oligarch money-launderers parking “hot cash” in this offshore housing market (at least until a 15% property tax on foreign purchases made Seattle the new Vancouver), we said that Vancouver houses had become the de facto new Swiss bank account, and because of that the houses – once purchased – would remain a highly overprized, if vacant tribute to China’s soaring capital outflows. 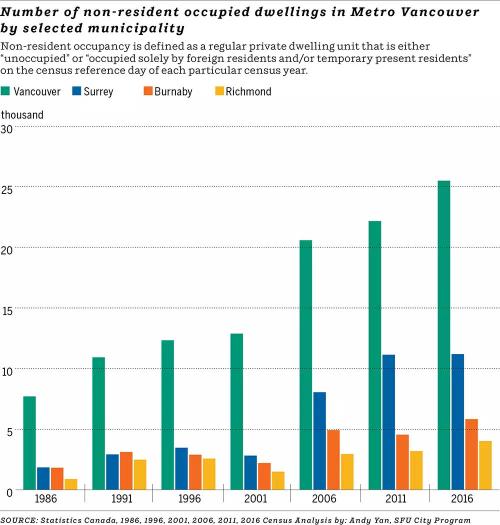 Now, courtesy of data by urban planner Andy Yan of Simon Fraser University’s City Program, this has been confirmed because according to the latest census numbers, as of 2016 there were 25,502 unoccupied or empty housing units in the City of Vancouver. Expanding to include the entire metro area, Yan found that vacant or temporarily occupied dwellings have more than doubled since 2001 to 66,719 last year as neighborhoods have hollowed out.

Yan compared census data for Vancouver over several decades to see how the percentage of “unoccupied” units or ones “occupied solely by foreign residents and/or temporary present residents on Census Day” has doubled during that time the Vancouver Sun reported. In 1986, it was 4%. By 2016, it had doubled to 8.2%.

“Exact definitions and measures have changed slightly over 30 years and patterns should be interpreted as directional,” Yan writes in a report released Wednesday.

The number of Vancouver’s prized, if vacant, mansions far outstrips other municipalities with 25,502 units that are either unoccupied or owned by temporary or foreign residents. 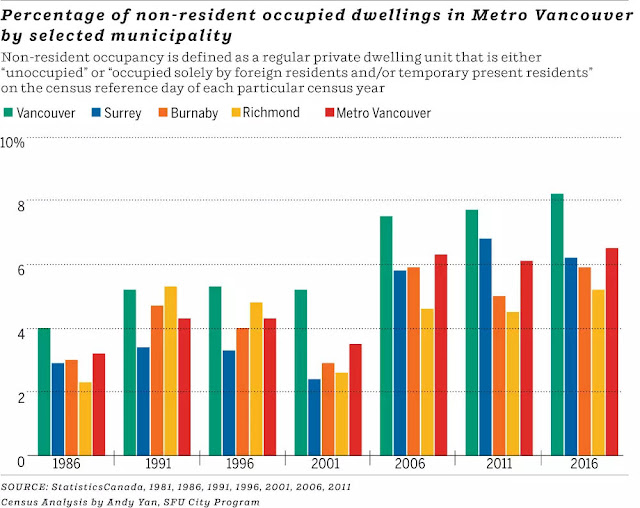 Yan said most of these were concentrated in three areas: Coal Harbour, Marine Gateway and Joyce-Collingwood. Surrey came in second at 11,195, Burnaby at 5,829 and Richmond at 4,021. The focus has clearly been on the most expensive neighborhoods: the number of unoccupied units increased 25% in Richmond between the 2011 and 2016 census and by 28 per cent in Burnaby.

To take advantage of this multi-million mansion ghost town, in November 2016 the Vancouver city council voted to approve a tax on empty homes, the first in Canada. Based on self-reporting owners, the tax is a one-per-cent charge on homes that are not principal residences or are not rented out for at least six months of the year. The goal was to improve Vancouver’s tight rental vacancy rate of 0.6 per cent by encouraging owners of thousands of empty units to offer them up for renting.

Last Thursday, Vancouver Mayor Gregor Robertson said that “it’s unacceptable for so much housing to be treated as a commodity,” even if, ironically, it was the government’s own actions which allowed the city’s houses to become an offshore piggybank for wealthy Chinese. “Housing is for homes first, and as investments second. Vancouver will continue to do all it can to maintain and protect affordable homes, and pursue all tools available to ensure the best use of all our housing.”

As Bloomberg adds, concerns are growing that the Pacific Coast city — long a magnet for global cash — is turning into a playground for the rich as luxury real estate squeezes industry and prices out the middle class. The provincial economy leads Canadian growth and job creation, yet its public schools are suffering from declining enrollment and households earn below the national median. Businesses using Canada’s largest port struggle to carve out space, while low-wage service sector jobs cater to wealthy retirees and tourists.

While policymakers and real estate experts are calling for more housing supply and greater density near the city center to boost productivity and temper prices, the latest census figures show the opposite may be happening.

Meanwhile, as a result of the influx of Chinese money, the number of residents on Vancouver’s west side, long favored by families and an easy commute to downtown, has fallen 3% since 2001, in contrast to 5% growth in population across the whole city, Yan said. The reason: median single-family house can cost as much as C$4.9 million in that area – about 65 times Vancouver’s median household income.And while the local population can no longer afford houses in the area, last year David Eby, a member of British Columbia’s legislative assembly, identified C$57.1 million worth of residences bought by students reporting no income in his west-side district of Point Grey.

Such neighborhoods “have become just luxury items like Ferraris,” said Yan. “They’re not affordable for most local incomes.”

The bad news for wealthy Americans, if only in Seattle for the time being, is that they will be next to feel the wrath of China’s billionaire “students” gobbling up any and every multi-million dollar house, unless of course the PBOC is successful in halting China’s unprecedented capital outflow. It remains unclear if home sellers in the US west coast accept bitcoin as payment.