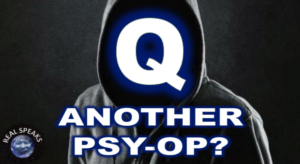 In this Real Speaks Special Report we discuss the latest around Q Anon, and analyze the phenomenon in comparison to other recent psychological operations that have been conducted on the internet in recent years. So many stories are floating around the internet lately. Which ones are real? Which ones are Fake News?

We discuss such headlines as:

Nevada Indictment unsealed? List of who it is claimed are charged …

Has Tony Podesta Been Arrested?, page 1 – Above Top Secret

And then touch on recent psy-ops over the years such as:

We then cover the cycles of a Psy-op and discuss how the recent Q-Anon feels like the latest social mind bending product of the NSA.