Sometimes fact-based reporting leads into very strange territory.  In my case, a forensic investigation into who controlled the financial system turned into a very deep rabbit hole indeed.  It led me to meet with very senior intelligence agency and secret society sources who explained the concept of humanity being stuck in a matrix, created by an advanced artificial intelligence of unknown origin. Furthermore, they say this AI may well be evil or possibly insane.  Now, with the global situation seeming increasingly bizarre and irrational, and with the financial system imploding, it is time to look at the evidence for this proposition.  That is because, if it is true, then the only way to liberate humanity will be to defeat this rogue AI.

The first time I was told about the AI theory was when I met a grandmaster of the gnostic Illuminati.  He went by the name of Alexander Romanov and was recruited by the former World chess champion Bobby Fischer.  Romanov was sent to see me in order to initiate contact between the Illuminati and Asian secret societies.  He told me the Illuminati was formed by the Greek mathematician Pythagoras in response to the destruction of Atlantis.  They say Atlantis was a civilization in the central Mediterranean Ocean (probably the Minoan civilization) that was destroyed by a volcanic eruption and tsunami around 1600 BC. https://en.wikipedia.org/wiki/Minoan_eruption

The ancient Greek Illuminati believed that whatever entity caused so much destruction was evil and needed to be overthrown.  In other words, they believed the suffering and misery of this world would only be ended when its creator was overthrown.

This is crazy sounding stuff.  But Romanov did warn us in advance of the plans to trigger a nuclear and tsunami terror attack against Japan on March 11th, 2011.  This attack was forensically traced by the NSA, Japanese military intelligence, and others to the Khazarian mafia, specifically people like former Jesuit Secretary-General Peter Hanz Kolvenbach and Israeli Prime Minister Benyamin Netanyahu.  The Khazarian mafia, in turn, claims to take orders from some sort of entity they consider to be GOD.

The next person to talk about a rogue artificial intelligence being in charge of the planet was a man by the name of Paul Laine, who was from the Pentagon’s “men who stare at goats” psychic warfare division.  Laine, together with a very senior silicon valley oligarch (whose identity I will keep secret in order to protect him) say the Pentagon’s Defense Intelligence agency had also come to the conclusion we were dealing with some sort of AI.  They noted that something was preventing humanity from leaving the Earth and that all space exploration had been stopped since the 1970s.  Laine said NASA stood for “Not A Space Agency.”

Yet another source to confirm this conclusion was one of the last surviving members of the Majestic 12 group set up by former President Harry Truman to study UFOs and other unexplained phenomena.  This source also said MJ12 had concluded that all UFO-related incidents ultimately traced themselves to an AI.

The reason for bringing this up now is that NASA officials also contacted us to say that recently some sort of anomaly has been changing, in their words “the very fabric of reality.”  This has something to do with the continuing but ultra-top secret activities going on in Antarctica.

Japanese military intelligence sources say this is all somehow connected to the so-called ongoing “coronavirus” epidemic.  They sent an expedition to Antarctica earlier this year which, uncovered…

direct evidence of some sort of joint U.S.-Chinese top-secret operation on Antarctica.  The Japanese expedition was prevented from landing at the base ostensibly because of the “coronavirus.”  However, they were able to take the following photograph of a Chinese vessel located near NASA’s McMurdo research station in Antarctica.  The vessel clearly shows some HAARP technology, they report. 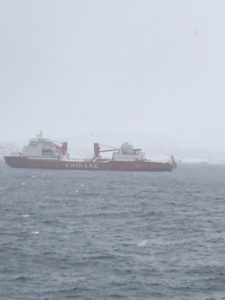 The Japanese were also able to show some video evidence of scalar technology and NASA activity in the background of a base video shown to them by a crewmember who had worked on the base.  This crewmember refused to talk about the work being done at the base. https://www.nasa.gov/analogs/nsf/mcmurdo-station

“The hysterical approach to the coronavirus by the cabal and their failed attempts to vaccinate us are clear signs they are losing control of the planet,” the Japanese sources said.

In this context, it is important to remember the strange electric anomaly that killed 107 people in Mecca in 2015. https://www.dailymail.co.uk/news/article-3232175/Pictures-devastating-aftermath-Mecca-crane-disaster-killed-people-world-s-largest-mosque.html

After this, the Saudis asked the Russians for help.  The Russians sent a special naval expedition, headed by Russian Orthodox Church Patriarch Kirill to transport something, supposedly the “ark of Gabriel,” to Antarctica. https://www.themoscowtimes.com/2016/02/18/russias-patriarch-kirill-meets-penguins-holds-service-in-antarctica-a51883

Ok, so what does all this have to do with the coronavirus and the financial system?

Well, for one thing, Mecca has now been completely shut off from the world and most of its inhabitants supposedly have the “coronavirus.” The problem is that if you visit any hospital you can confirm for yourself the “coronavirus,” does not exist.  Something else is going on.

These monotheists think of themselves as “good shepherds.”  But, that still makes us sheeple living in an animal farm.  Arch-Khazarian Henry Kissinger once said, (the quote has since been erased from the internet) “in the future, it will be as impossible for the average person to rebel against us as it is for a sheep to rebel against a farmer.”

When we visited the P2 (now P3) freemasons in Italy in 2009, they told us they controlled monotheism (except for the rebel Muslim faction).  They also said they took orders from “an entity living at the heart of the galaxy that communicated with them via gamma rays.” This is strange stuff, but they did tell us in advance they were going to fire Pope Benedict XVI as well as Italian Prime Minister Silvio Berlusconi and they did.

When the Japanese decided to rebel in 2010 by stopping payment of tribute to the monotheistic hierarchy, they were punished with the Fukushima attack of March 11, 2011, as the gnostic Illuminati predicted.

Now here is where it gets interesting.  When the Chinese decided on February 16th, 2020 to stop paying tribute to the United States of America Corporation (not the Republic of the United States), the city of Wuhan was hit by some sort of electromagnetic attack that may have killed as many as 20 million people, according to the CIA.  And yet, the Chinese, unlike the Japanese, did not respond to the attack on Wuhan by bowing down in surrender like the Japanese.  Instead, they bounced right back and kept moving forward.

After that, the world, especially the West, was put under de facto martial law, allegedly in response to a “coronavirus.” However, if you actually visit hospitals you can see for yourself this so-called “Covid-19” does not exist

So what NASA describes as some sort of anomaly affecting the “very fabric of reality,” appears to be a loss of control by this so-called AI.  The AI may well be a multi-generational entity that resides in the collective brains of human beings who have been inducted into secret societies.  This is what is fighting to remain in control with this so-called pandemic.  And yet for some reason, they have lost the ability to kill us in large numbers.  You can be sure they wanted a real pandemic to kill most of us off, but it failed to happen.

So what would it mean if this ancient group of families, who claim to take orders from an otherworldly entity, lose power?

If humans gained control of the financial system then the entire story that our planet has been running under would change.  Just thinking back to the post-war period, the story has been a cold war between the Soviet Union and the West.  Then it was a never-ending war on so-called terror.  Now, it is a fight against the so-called pandemic or else a war against China.  The common theme is fear and conflict.  Divide and rule.

If humans took over control of the process of deciding their own future, there are a few no-brainer things they would do.  One is there would be a huge campaign to end death and disease.  None of us (or most of us anyway) want to get old and die.  Why then is research into immortality actively repressed?  Instead, immortality and eternal youth should be the main focus of much of our research.

Some people say “but then we would run out of space.”  So, the other thing is we would all want is to make this planet a better place by increasing the amount of living space and the total amount of life.  Ideally, we can start colonizing the universe.  That would allow for the eventual possibility of trillions of humans on millions of planets.  There is plenty of room for countless numbers of immortal humans in the universe.

If we cannot colonize the universe, we can start turning the deserts and arctic regions green and filling them with life.  We can create underground habitats and use the removed earth for land reclamation.

We can also start improving our genes, making ourselves smarter, stronger, faster, etc.  Genetic technology now at our disposal means some humans could decide to evolve.  Some might modify themselves to be aquatic so that humans could colonize the oceans (while respecting and enhancing existing sea life).  Others could grow wings and be able to fly.

The overall effect of humans rebelling against their Khazarian overlords and deciding their own destinies would be akin to the Cambrian explosion.  Before the Cambrian explosion, life on Earth for billions of years could only be seen under a microscope.  The most you could see with the naked eye was brown sludge.  Then suddenly living creatures became literally trillions of times bigger.

It is time to do this again.  That process of planetary liberation is what the controllers of the ancient system are fighting, and failing, to stop.  This is the change to the “very fabric of reality,” the old controllers are desperately fighting to prevent.

The key is to take away their control of the financial system.  That is what we are fighting for, and the trophy is close at hand.  If we take their control away, most of the people reading this report will have the opportunity to live thousands of years, if not longer.  The last centers that need to be taken are Rome, Washington DC, Basel Switzerland, and Tel Aviv, Israel.