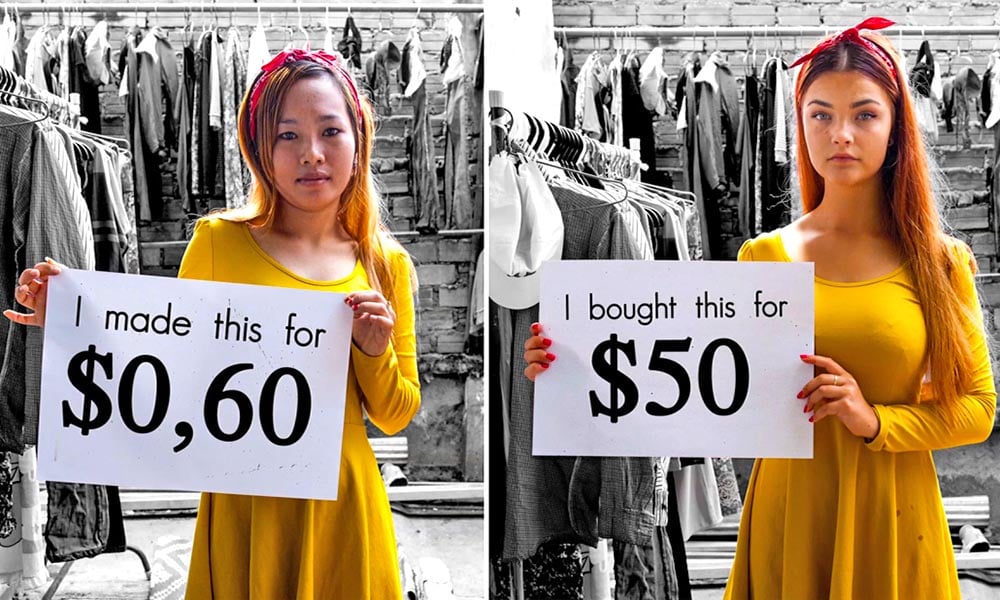 There is no easy way to say this to a Western audience.

Our clothes — the stuff in our wardrobe right now — are the result of a reckless industry, responsible for some of the worst pollution and most horrific human rights violations on the planet. Pressured by fashion’s largest name brands, textile factories and garment manufacturers consistently cut corners to increase annual profit margins, at any cost. The modern fashion industry, currently making upwards of $3 trillion a year, is simply unsustainable. Here’s why:

Next to big oil, the clothing industry is the second largest polluter in the world and is responsible for the most the detrimental toxic waste dumping, ground water contamination, and water consumption of any industry.

The unrelenting waste of retailers and typical Western households has far exceeded the capacity of global landfills. Americans alone throw away over 14 million tonnes of clothes every year; annually, that’s about 80 pounds per person. Local thrift operations only sell about 20% of donated items. More than 80% of our clothes end up being packaged and shipped to landfills and incinerators around the world.

In addition to using vast amounts of water during manufacturing and dirty oil for shipping, petroleum-based fibres (including acrylic, polyester, and nylon) are non-biodegradable, taking hundreds of years to break down, while releasing a harmful greenhouse gas 310 times more potent than carbon dioxide. Carcinogenic plastic microfibers have been proven to bioaccumulate in our groundwater, travelling from rivers to oceans, and into our food chain. An increasing contributor of global deforestation, rayon is a synthetic fiber made from wood pulp, manufactured with toxic chemicals such as caustic soda and sulphuric acid and routinely dumped into local ecosystems.

It can take more than 5,000 gallons of water to manufacture one cotton t-shirt and a pair of jeans. Responsible for colossal water consumption, as well as the most pesticide-intensive crop in the world, cotton consumes 10% of all agricultural chemicals and 25% of all insecticides.

The environmental impacts of growing genetically modified cotton are devastating to local communities, who suffer exponentially higher rates of birth defects, mental illness, and cancer. Seed and chemical magnate Monsanto has exacerbated the harmful environmental and health impacts of cotton operations by threatening local farmers with extortion. As a result, the suicide rate among farmers in India’s largest cotton-producing Punjab region is well-documented, where it is estimated a distraught farmer takes his own life every 30 minutes.

Appalling human rights violations are among the worst of any industry.

The system was originally intended to provide jobs to poor communities as an opportunity to work their way out of poverty. Instead, “fast fashion” CEOs (making upwards of tens of millions of dollars every year) cut costs and increase profit margins by preying on nations notorious for slave-labour friendly practices and egregious labour-law violations, including Bangladesh, China, Cambodia, Indi and Vietnam.

According to the 2015 award-winning documentary The True Cost, one in six people alive on the planet are involved in the fashion industry, making clothing the single largest labour-intensive industry in the world. Of the 40 million garment labourers worldwide, four million of them work in Bangladesh; 85% of them women, living in extreme poverty on about $2 a day. Working in oppressive heat without breaks, often enduring physical and sexual abuse from management personnel, factory workers bear the biggest brunt of the low-cost fashion industry. Workers are often forced to work in unsafe working conditions, frequently resulting in preventable fatalities caused by factory fires and building collapse.

The old argument that sweatshops are somehow good for poor communities is a myth perpetuated by those who seek to maintain exponential profits — at the expense of labourers, far-removed from the glamour of retail storefronts. The industry’s success is predicated on the lie that eternal consumer happiness lies on the other end of the next purchase. Any reasonable person can see the clothing industry is capitalism run amok, consumed by profits, and without regard for human life or the environment.

For those who want to do something about it, there is good news, but first we need to understand the reality of where our clothes come from, what went into making them, and the unbelievable cost of what we wear.

There is a revolution underway to fundamentally restructure the clothing industry. Fair-trade fashion puts human capital and environmental sustainability as a tangible metric toward the bottom line. Minimizing harmful impacts drives the standards of production, across the board. From sourcing organic fibres to re-using all viable materials available; from providing life and community-enriching experiences to delivering on a promise of a living wage — fair-trade industries are driven by consumer demand and responsible professionals with a passion for producing quality products in a way that supports people and the planet.

You can do your part, too. Need less. Buy second-hand. Support fair-trade. Buy organic and recycled goods made from post-consumer waste. Read labels. Boycott brands and retailers that utilize sweatshops. Know your clothes, do your research, and “never doubt that a small group of thoughtful, committed citizens can change the world; indeed, it’s the only thing that ever has.”  –Margaret Mead