Top Ten Illuminati Movies – A list of Hollywood movies in which the main protagonist discovers the existence of an Illuminati-like cabal with goals and intentions that run counter humanity’s well-being. They awaken. They organize. They fight back! Some, with more success than others.

Bill Gates said he was surprised by some COVID-19 conspiracy theories about him and thinks people were “looking for a boogeyman.”

“I guess people are looking for the ‘boogeyman’ behind the curtain, the over-simplistic explanation. Malevolence is a lot easier to understand than biology,” he said.

An MSNBC anchor revealed in a recent segment that she was hospitalized with heart inflammation in December, leading her to miss work for about a month.

Yasmin Vossoughian said that the health scare started on Dec. 20 when she started to experience chest pains that “waxed and waned over a period of 10 days.” Those pains “continued to get worse” over the coming days, she added.

The anchor, who hosts a weekend program on the left-wing network, said she went to urgent care on Dec. 30 and was told she had acid reflux. A day later, she woke up with severe chest pains and pain in her left shoulder, leading her to believe she was suffering from a heart attack.

Vossoiughian, 44, said she went to the emergency room. Doctors diagnosed her with pericarditis, or inflammation of the lining of the heart. They claimed it was caused by “a literal common cold,” she said.

(Bloomberg) — Steaks and hamburgers will likely be more expensive in the next few years with US cattle shrinking to its lowest herd since 2014. 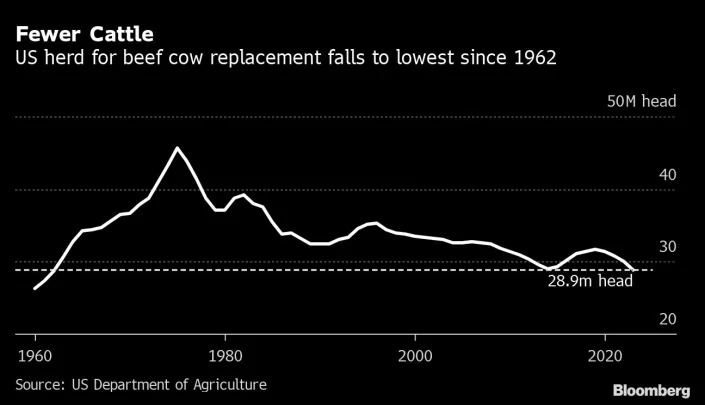 There were almost 89.3 million cattle as of Jan. 1, down 3% from a year ago, according to a US Department of Agriculture cattle-inventory report Tuesday. While the drop wasn’t unexpected — the total nearly matched expectations in a Bloomberg survey — a bigger decline in beef output may still be ahead in 2025 or 2026.

“With fewer cattle supplies becoming available, beef production is expected to undergo a sizable decline over the next few years,” said Courtney Shum, a livestock-market reporter at Urner Barry, an industry publication.

Years-long drought in the US Plains has withered pastures and squeezed supplies of feeds including hay and corn. The result: ranchers have liquidated some animals to cut costs, depressing breeding.

KENNER, La. – A new study shows children are dying of fentanyl poisoning faster than any other age group.

Many of these deaths are children of drug users who are accidentally exposing their kids.

That’s what happened on New Year’s Eve in Kenner, Louisiana, a New Orleans suburb. One-year-old Leo Callero was found dead with fentanyl in his system. His family tells us his mother, Alexis Callero was a heroin user and the state was actively investigating his custody, but it was too late.

Dorothy Thompson (1893-1961) was the top female journalist of the pre-war and war years. She married Sinclair Lewis, a Nobel Prize winner in literature. Thompson married Lewis in 1928 and acquired a house in Vermont. The couple divorced in 1942.

Thompson relocated to Europe in 1920 to pursue her journalism career in hackery. She was interested in the early Zionist movement and promoted it.

Accordingly and as a made woman, she was rapidly advanced and appointed as Vienna correspondent for the Philadelphia Public Ledger. While working in Vienna, Thompson focused on becoming fluent in German.

In 1925, she was promoted again, this time to chief of the central European service for the Public Ledger. She did a stint in Moscow, where she hung out with Communist sympathizers and Stalin apologists, such as Walter Duranty. While millions were being murdered, she wrote her own apologist pro-Soviet propaganda book New Russia in 1928.

Then, in 1927, the Jewish-owned New York Post appointed her head of its Berlin bureau in Germany. While there, she witnessed firsthand the rise of the National Socialist Party.

Thompson’s most significant work abroad took place in Germany in the early 1930s. While working in Munich, she met and interviewed Adolf Hitler for the first time in 1931. This would be the basis for her subsequent heavily promoted book, “I Saw Hitler,” in which she wrote about the dangers of him winning power in Germany.

Thompson described Hitler in the following terms: “He is formless, almost faceless, a man whose countenance is a caricature, a man whose framework seems cartilaginous, without bones. He is inconsequential and voluble, ill poised and insecure. He is the very prototype of the little man.” Thompson predicted he would go nowhere.

One could call Hitler many things, but “Little Man” and “inconsequent” shows just how divorced from reality Thompson was during this period. She also completely failed to observe the once in a millennium swagger of the man. Later, when the full Hitlerian force had crashed over Europe, Thompson was asked to defend her “Little Man” remarks; it seemed she had underestimated Hitler. The Hitler regime considered both the book and her articles idiotic and, in August 1934, Thompson was expelled from Germany.

Spartacus Educational points out that Jennet Conant, the author of “The Irregulars: Roald Dahl and the British Spy Ring in Wartime Washington” (2008) argues that Ernest Cuneo, who worked for British Security Coordination, used Thompson and other American journalists as part of a Mockingbird-type spy ring in D.C. to drum up opposition to Britain’s enemies.

Thomas E. Mahl, the author of “Desperate Deception: British Covert Operations in the United States, 1939-44“(1998), argued: “During this period … Dorothy Thompson exhibited an amazing [ability] to reflect the British propaganda line of the day. This is one of the few useful conclusions to be gained from reading the hundreds of pages in her FBI file. Thompson’s diary, kept for only a dozen entries in early 1942, also illustrates her close ties to the intelligence community.”

In 1936, Thompson began writing “On the Record,” a New York Tribune (Jewish-owned) syndicated newspaper column. It was read by more than 10 million people and carried by more than 170 papers.

Jewish-owned NBC hired Thompson as a news commentator. She began in 1936 and remained with NBC until 1938. Her radio broadcasts went on to become some of the most popular in the United States.

In 1938, Thompson championed the cause of Polish/German-Jewish teenager Herschel Grynszpan, whose assassination in Paris of minor German diplomat Ernst vom Rath triggered the events of Kristallnacht in Germany. Thompson’s broadcast on NBC radio was heard by millions of listeners and led to an outpouring of sympathy for the young assassin. Under the banner of the Journalists Defense Fund, more than $40,000 US dollars were collected.

In 1939, Thompson was featured on the cover of Time magazine with an accompanying picture of her speaking into an NBC radio microphone. The article was captioned “she rides in the smoking car,” and it named her as the second-most-popular and influential woman in the country behind Eleanor Roosevelt.

In the lead up to World War II, Thompson was a leading pom-pom hack for war with Germany. She was a keynote speaker at the Biltmore Conference in 1942 and demanded unrestricted immigration to America. Throughout the war, she engaged in script reading for Zionist hackery.

Thompson Discovers Truths and Goes Off the Rails

In 1945, Thompson went to Palestine to do more leg work for her Zionist bosses, who were creating Israel. However, once on the ground, Thompson had an epiphany. She realized that there was a long-established population of 1.2 million Palestinians in a country called Palestine, and that the plan was to removed them and steal their land and homes.

Apparently, Thompson was not quite a full-blown sociopath and had some courage and conscience. She was about to find out the cost for that. She was quickly fired from her positions in Jewish-owned journalism.  Her speaking engagements vanished. She lost her many Jewish “friends” who had previously honored her.

She began to speak out on the Palestine issue and come out of her brainwashed hive mind fog.  After running into the standard anti-Semitism accusations, she stiffened rather than run away with her tail between her legs.

To Thompson, the war of 1948 showed Zionism as “an aggressive, chauvinist movement” and the new State of Israel as “an expansionist power.” She was “angered by Jewish terrorism in Israel and appalled by Menachem Begin and the Irgun being treated as heroes in New York City.”

She wrote in 1950, “The Zionists would like us to believe that there is no such thing as an Arab”, and that “they have also adapted the attitude that the State of Israel, unlike every other state on earth, is sacrosanct, and outside any criticism whatsoever.” She called Israel the U.S.’, “the 49th state of the Union” (prior to the adoption of Hawaii and Alaska), and described Israel as “the only nation in history to have been canonized at birth.”

In 1950, Thompson addressed the idea of dual Israeli-American citizenship and effectively called it anti-American. She put two and two together and concluded that Zionism was a recipe for perpetual war.

Thompson’s main biography is “American Cassandra” by Peter Kurth. To me, it seems Thompson was forced by truth and reality to remove her rose-colored glasses about Zionism. The psychology here is of interest. Here we have an individual who was conditioned and well rewarded for being a hack. She was also on the winning side of the ZOG wars. Thus, she thought herself a friggin’ genius. But apparently she had enough of a heart left that when she was awakened in 1945, she reacted as someone with a soul should.

But it was all too late for the awakened Thompson, who fell into obscurity. In typical fashion her work was scrubbed and relegated to the memory hole.