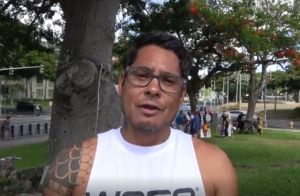 There is no doubt things are breaking loose all over the place, but I was very pleased to find these reports from Hawaii. Thanks to KF for sending the first one. I’ve just watched the second one, and the fire captain’s response is powerful.

The Bitchute channel for the first video, Hawaii Free Speech News, has quite a few other videos where island people are standing up for their rights, and against the forced vaxes.

“Abrien Aguirre worked in Oahu’s biggest Rehab and Skilled Nursing Facilities in three separate covid units and he shares what he witnessed which is shocking to say the least.

“Occupational therapists are health care professionals who work with people of all ages with various health issues. They work to adapt surroundings and tasks to help people live better with disabilities, injuries, or illnesses. They work in many different settings such as clinics, hospitals, and nursing facilities.

“Puppet Governor Ige’s dictatorial vaccine mandates have backfired on the covid narrative as state and federal employees, healthcare workers, hotel industry workers, and other folks risk losing their jobs for not wanting to get the experimental gene therapy injection. A lot of people are starting to come out and expose the greatest scam of the 21st century as they are forced to move to a freer state on the mainland in order to work and support their families. The medical tyranny is here in Hawaii is coming to a state/city near you. God bless the whistleblowers!”

Michael Green has filed a class action lawsuit at first representing 1,200 first responders against the Governor & Mayor’s vaccine mandates with thousands more expected to join… {He] says that the vaccine is killing people all around the country. There are effective treatments. It’s unnecessary to test asymptomatic people because the CDC says that they don’t spread the virus.

“Honolulu Fire Captain Kaimi Pelekai gives an emotional testimony about losing his job because he doesn’t want to put this experimental vaccine in his body that is killing people.