(Scott Boyd) The MyPillow CEO has a new documentary. He leads by describing the two miracles that happened on and after election day that made it possible for us to be where we are right now… on the verge of having the truth revealed.

The post Mike Lindell Describes the Two Miracles That Led Him to Make ‘Absolute Proof’ appeared on Stillness in the Storm. 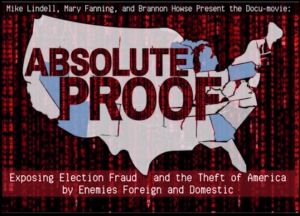 This video is well worth watching. I watched the whole thing. It presents person after person and data set after data set after data set about the 2020 election, and the major voting discrepancies that occurred across the USA, and the international interference. It includes appearances by Mary Fanning, Gen. McInerney, and a variety of other people “involved” in the election.

If one part “stood out”, it’s at 1:35 (1 hr. 35 min.), where Mary Fanning goes through all the data that was collected, followed by a very colorful graphical depiction of how the vote changing was done and exactly where it came from.

Thanks to all of those who pointed me to this. The original link is https://michaeljlindell.com/, and I immediately went to YouTube link someone sent. So I downloaded the video immediately (as MP4) and saved the audio (as MP3). Fortunately I did that, as, about 20 minutes later, I tried viewing it and… it had disappeared (from YouTube). Later I found it on Rumble, at the CRTNOnline channel. That video is posted below.

Since I view this as a landmark video, below is listing of the places I’ve found where it may be viewed: