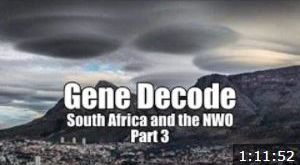 I wanted to post the YouTube links on this yesterday, but I looked today (at the Blessed2Teach Youtube channel), and they were all gone! Fortunately they have uploaded them to Bitchute and Rumble, so I “got” to post all these here, in one place.

There’s a lot of very illuminating data in these, and although it may be challenging to look at and/or know about, I do feel it’s part of the process of Awakening for the Planet.

Only Rumble links were used here. (Brian Shilhavy) VoiceTV Nigeria released a video this week warning Africans about Bill Gates’ vaccine plans for the continent, while also exposing the agenda of the Rockefeller Foundation.

The post African Resistance Building – Bill Gates May Find Out Africans are Not So Compliant with His Population Reduction Efforts through Vaccination appeared on Stillness in the Storm. (Jeremy R. Hammond) The World Health Organization (WHO), a pair of articles recently published in TheBMJ have revealed, is sponsoring an experimental study of a controversial malaria vaccine among African children without obtaining informed consent from parents.

The post Horrific: WHO Experimenting on African Children Without Informed Consent appeared on Stillness in the Storm. (Adam Lusher) Group said to have ‘spread the virus’ at the behest of Keith Maxwell, eccentric leader of the shadowy South African Institute of Maritime Research, who wanted a white majority country where ‘the excesses of the 1960s, 70s and 80s have no place in the post-Aids world’. (Annie Kelly) A landmark legal case has been launched against the world’s largest tech companies by Congolese families who say their children were killed or maimed while mining for cobalt used to power smartphones, laptops and electric cars, the Guardian can reveal. Related The CIA Remote Viewed Mars in 1984 Source – The Guardian by […] The post Egyptian Colony in the Grand Canyon, Tobacco in Mummies — Africans Discovered America appeared on Stillness in the Storm. The post Advanced ET Technology Discovered with Mind Blowing Implications appeared on Stillness in the Storm.