A whistleblower who once worked for the 2nd largest chicken producer in the U.S. has come forward to tell the world about the birds’ horrible living conditions. He also sheds light on the reason why the overwhelming majority of US chicken producers wash the poultry in chlorine before putting it on the market.

According to the whistleblower, ex-North Carolina chicken farmer Craig Watts, tens of thousands of ultra-plump birds are stuffed into oversized warehouses, where they are so fat their legs buckle under their own weight. The chickens, which can reach 9 lbs., are not exposed to natural light and often die before they reach maturity. Many of them are covered in their own feces. [1]

This, the whistleblower claims, is why 97% of American chickens are washed in chlorine after they are slaughtered, though there is no legal requirement to do so.

“The birds are too heavy to stand because they have been bred for breast meat and nothing else, so they spend their lives squatting. It’s like 2 toothpicks sticking out of a grape.

They spend 95% of their time sitting on the litter, a mixture of pine shavings and fecal matter from that flock and prior flocks.”

It gets worse. Watts says the birds’ living conditions are so cramped, they injure one another just moving about the warehouse.

“Their flesh would rot, and when you have them crammed in so tight, they will walk over other birds if they want to get to the food or scratch the others and cause a wound. It is awful.” [2]

Watts said he quit the poultry business over the inhumane conditions, some of which was documented in shocking video footage filmed at 2 Pilgrim’s Pride facilities in Hull, Georgia. Chickens can be seen being tossed about by farm workers, and collapsing under their own weight. The owner of the farm can be seen bludgeoning the animals to death with a metal rod.  Chickens are pictured being violently shackled down and punched. [3]

We’ve included the video, but be warned; it is very difficult to watch.

After the Human Society of Georgia exposed the abuse, Pilgrim’s Pride said in a statement:

“Ensuring the well-being of the chickens under our care is an uncompromising commitment at Pilgrim’s.

This isolated incident of of unacceptable behavior does not reflect our approach to animal welfare or the approach of the more than 4,000 family farm partners who interact with our chickens daily.” [1]

America’s chicken farmers are under immense pressure to produce. Nearly all of them are contracted with major corporations like Pilgrim’s Pride, who supply them with chicks, feed, and equipment.

According to Jim Sumner, president of the US Poultry & Egg Export Council, US chickens are treated humanely, and chlorine-washing is only done as an added measure of safety which protects against food-borne illnesses. 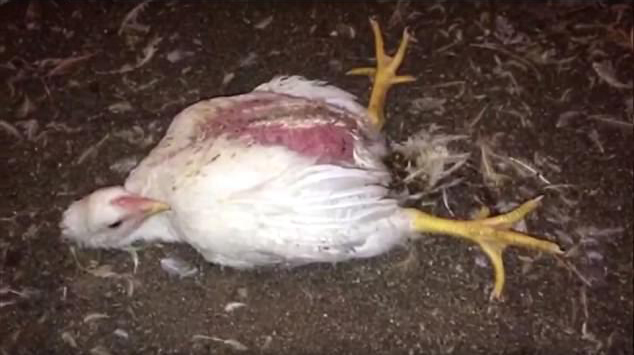 “Sometimes these [animal welfare] organizations do not have a thorough understanding of the process or scientific facts.”

But the fact that we have to chlorinate chicken before it can be eaten certainly seems to suggest that the living conditions inside farms may be as unhealthy for humans as they are for the livestock.

A senior policy analyst at the US Center for Food Safety, Jaydee Hanson said:

“These chemicals are basically like the ones we put in our toilets to clean them. The question is, why are chickens so contaminated in the first place?  And the issue is that we are not doing a good job of raising chickens.”