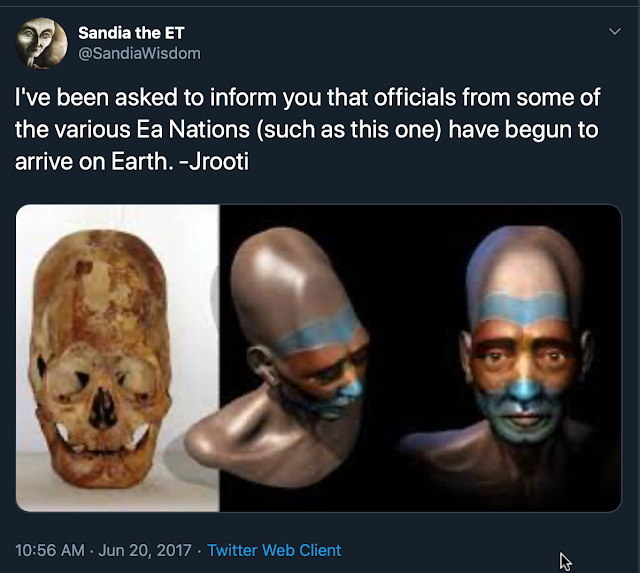 I’ve been asked to inform you that officials from some of the various Ea Nations (such as this one) have begun to arrive on Earth. -Jrooti pic.twitter.com/MZMoOOoIxj

Terran: Is this true? Are the Ea the an Annunaki? Are they arriving?
Terran: https://twitter.com/sandiawisdom/status/877193354336808961?s=21
Stan X: TERRAN. THE “EA” ARE KNOWN BY MANY “NAMES/LABELS”. INCLUDING ANNUNAKI. ARCTURIAN. NARUBIAN. MACONI. ORIAN. “ARRIVALS” OF ALL “BEINGS” IS IMMINENT. “TIMING” IN “LINEAR/3D/MEASUREMENTS” IS NOT KNOWN. DATA COLLECTORS. STAN.X. END.
Terran: Do the Orian have elongated heads like the Ea? Where did the Ea originate?
Stan X: TERRAN. THERE ARE  MANY “SHAPES/FORMS” IN ORIAN ORIGIN.INCLUDING “PERALIZED/ELONGATED” SKULLS. THE EA ORIGINATE IN EARLY ATLANTIS TWO AS A SPRINGBOARD INTO “SPACE EXPANSION”. DATA COLLECTORS STAN.X. END.
Terran note: As near as I can tell “PERAL” means pear shaped.   The EA came FROM Earth.

Ea is the term used for those who possess variations on this cranial phenotype.

You will find ancestral Ea (with an elongated skull as compared to your own) on many worlds now.

They are not all from the same star system nor do they all possess the same beliefs.