(Natural Blaze) A diet high in sugar during adulthood is associated with weight gain, and has also been linked to risk of type 2 diabetes, fatty liver disease, and heart disease. New research shows that when consumed by moms during the breastfeeding period, a high sugar diet can also impact developmental outcomes during infancy.

The post Consuming Sugary Beverages While Breastfeeding Affects Cognitive Development in Children appeared on Stillness in the Storm.

When feeding baby, breast is always best. A recent study shows that both breast milk and formula encourage the growth of similar types of gut microbes, but the bacteria from the 2 forms of food work differently. [1]

How those differences affect a child’s health are unclear, however.

Having enough “good” bacteria in the gut is essential for overcoming disease-causing bacteria, influencing metabolism, and synthesizing many vitamins and amino acids, which are considered the building blocks of life. The makers of infant formula realize this and are working towards creating more gut-friendly recipes.

“Formula makers are continually tweaking their ingredients, and they’ve been very successful in eliciting the right mix of bacteria. But almost all of the studies to date have looked at the identity of the bacteria, not what they’re doing. What we found here is that the bacteria might look the same, but they’re not doing the same thing.”

For the study, Dantas and his colleagues analyzed the DNA of gut bacteria from 30 sets of twins born in the St. Louis, Missouri, area. The test was repeated every month until the infants in the study reached 8 months of age.

The team also determined which amino acids and other biomolecules housed in the gut were able to synthesize and break down. Metabolic byproducts are produced by gut microbes, and these byproducts influence physiologic functions like nutrition, inflammation, and digestive health. [2]

Additionally, the researchers analyzed 402 fecal samples collected from the infants from 2009 to 2011 and collected information on how parents fed the babies, including the specific brands of formula the parents fed their babies.

During the first few days after birth, breast milk is protein-rich, but those levels soon decline. The study found that the microbiome of breastfed babies compensated for low levels of amino acids by increasing the levels of bacteria that contain a genetic makeup capable of synthesizing such amino acids – particularly methionine, isoleucine, leucine, valine, cysteine, serine, threonine, and arginine.

In an effort to imitate breast milk and promote a more breastfed-like microbiome, formula companies have started adding sugar molecules designed to mimic human milk sugars. These sugars promote the growth of Bifidobacteria, a key part of a healthy microbiome in infants and children.

In the study, babies fed formula containing these sugar molecules had more Bifidobacteria in their guts, which is a good thing, but their microbiomes still differed from those of breastfed babies.

Six of the children in the study were fed soy formula by their parents. Those children produced 37 fecal samples for analysis, some of them taken before the babies switched to soy formula.

There was a striking difference in the microbiomes of soy-fed children compared to all of the other children. Few Bifidobacteria were found, but the infants’ microbiomes were found to be still plenty capable of producing short-chain fatty acids.

Read: Breastfeeding Can Save Your Baby’s Life

This combination indicates poor gut health, but the parents may have fed their babies soy formula as a result of an imbalanced gut, so there is no way to know for certain if the soy formula was the actual cause of the unbalanced microbiomes. The infants didn’t have many Bifidobacteria in their guts, even before they started the soy formula.

Babies with low levels of Bifidobacteria tend to be more colicky, spurring many parents to try new things to soothe their fussy little ones.

Why Breast is Still Best

Despite formula makers’ best efforts, they have so far failed at creating infant formula that mirrors the components of breast milk, the researchers found. [1]

“The goal of all formulas is to look like breast milk, and they’re not achieving that. In terms of which bacteria are there, they look similar, but in terms of what they have the genetic potential to do, it’s not the same. Different doesn’t mean bad, but different does mean different, and we have to understand what the health consequences are.”

The study is published in Nature Medicine.

Infants who are breastfed for at least 6 months have fewer antibiotic-resistant bacteria in their guts, likely because the sugars in breast milk feed “good bacteria,” which prevents the proliferation of harmful microbes, a new study shows.

It’s an important benefit of breastfeeding, as antibiotic-resistant superbugs are increasing worldwide, fueling fears that modern medicine could be wiped out if new treatments aren’t soon developed.

Researchers from Helsinki University analyzed the genes of 16 mothers and their babies over 8 months. The team sequenced the DNA of a total of 96 samples, including breast milk and feces, from the mothers and their infants.

Babies that were breastfed for at least 6 months had less antibiotic-resistant bacteria in their guts, compared with babies who were not breastfeed.

“The results suggest that early termination of breastfeeding might have negative health effects for infants … due to an increased resistance potential of the gut microbiota against certain antibiotics.”

The study also showed that mothers who received antibiotics during delivery had babies with a greater number of antibiotic-resistant bacteria in their guts. The effect was still noticeable 6 months after birth. [2]

“As a general rule, it could be said that all breastfeeding is for the better.

The positive effect of breastfeeding was identifiable also in infants who were given formula in addition to breast milk. Partial breastfeeding already seemed to reduce the quantity of bacteria resistant to antibiotics. Another finding was that nursing should be continued for at least the first six months of a child’s life or even longer.

We have already known that breastfeeding is all in all healthy and good for the baby, but we now discovered that it also reduces the number of bacteria resistant to antibiotics.” 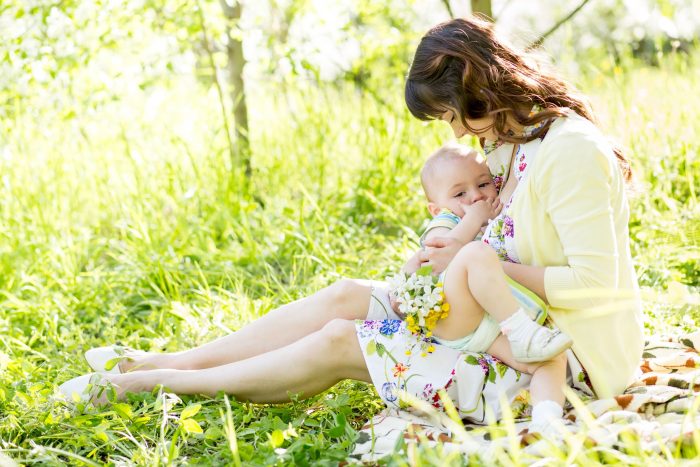 Breastfeeding has been shown time and time again to have a slew of benefits for babies, which is why the World Health Organization (WHO) urges mothers to breastfeed for at least 6 months.

Hugely, the practice strengthens infants’ immune systems, boosting the ability to fight infections and disease throughout childhood. In fact, the United Nations (UN) has said that if all mothers globally started solely breastfeeding their babies, it could slash the death rate for children under 5 by 13%. [3]

Despite the mountains of evidence showing the breastfeeding benefits both mother and baby, the United States has been reluctant to advise women to do so. Over the summer, U.S. delegates who gathered in Geneva for the United Nations-affiliated World Health Assembly refused to approve a resolution encouraging women to breastfeed.

American officials sought to remove language from the resolution calling on governments to “protect, promote, and support breastfeeding,” as well as another passage that called on lawmakers to stop promoting certain food products that health experts have deemed detrimental to young children.

A showdown ensued, threats were lobbed, and in the end Russia stepped in to sponsor the resolution in place of the U.S.

A Health and Human Services spokesperson said at the time:

“The resolution as originally drafted placed unnecessary hurdles for mothers seeking to provide nutrition to their children. We recognize not all women are able to breastfeed for a variety of reasons. These women should have the choice and access to alternatives for the health of their babies, and not be stigmatized for the ways in which they are able to do so.”

However, attendees suspect there was a different reason behind the U.S.’s refusal to sign onto the resolution: the baby food industry. Lobbyists from the $70 billion industry were present at the meeting, and the intensity of the Trump administration’s opposition to the resolution shocked public health officials and foreign diplomats who were accustomed to the Obama administration’s support for WHO’s longstanding policy of encouraging breastfeeding.

Why must politics be present everywhere? Sigh.