Scientists in Miami are developing a “concussion pill” using cannabis that has so far shown great potential for the treatment of traumatic brain injuries.

A combination of the hemp-derived cannabinoid, cannabidiol (CBD), and an NMDA amino acid anesthetic has been shown to improve cognitive function in a pre-clinical study of rodents with traumatic brain injuries compared with the individual ingredients.

The project is a collaborative effort between the University of Miami Miller School of Medicine, The Miami Project to Cure Paralysis, and Scythian Biosciences Corp. of Toronto.

“The results were statistically significant and encouraging. This evidence strongly suggests further testing is warranted on medical cannabis’ potential in the treatment of trauma to the brain.”

“may someday be mandatory equipment on the sidelines of every football, baseball, and soccer game, from youth leagues to professional organizations, ready to protect people of all ages from the brain’s immediate inflammatory response to trauma.”

He further believes the medicine could be used in emergency rooms and ambulances to help first responders “administer it to patients within the ‘golden hour’ after an injury,” which he called “a critical window of opportunity.”

Neither the combination of CBD and the amino acid nor the individual components caused adverse effects in the rodents.

CBD can be derived from the cannabis plant or the hemp plant. Unlike the psychoactive cannabinoid known as THC, CBD is not psychoactive, meaning that it won’t get you high. Research suggests CBD is useful for the treatment of everything from chronic pain to hard-to-treat forms of severe epilepsy. [2]

In June 2018, the U.S. Food and Drug Administration (FDA) approved the first cannabis-based drug, Epidiolex, for the treatment of 2 types of childhood epilepsy, Dravet syndrome, and Lennox-Gastaut syndrome. [3]

NMDA is a type of neurotransmitter similar to the chemical glutamate, which is found in almost all of the brain and nervous system’s connecting synapses. [2]

CBD for TBI and More 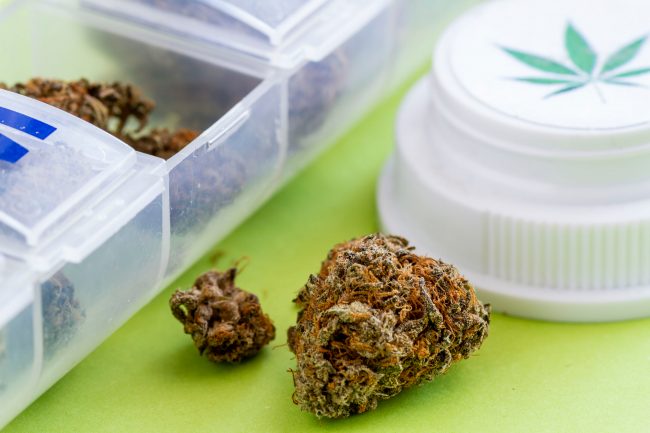 For the 2nd phase of the study, the scientists will likely administer the compounds in pill form to a control group and 2 groups of traumatic brain injury (TBI) patients – acute and chronic. [1]

The 3rd phase will be a full-scale clinical trial conducted over 3 years if the treatment proves to be safe and effective. The team said it plans to study the effectiveness of the compounds in the treatment of other types of injuries.

If all goes well, the FDA would then evaluate the drug’s therapeutic efficacy in treating TBI and concussion of varying levels of severity.

In the short term, concussions can cause headaches and dizziness. Concussions were once considered “no big deal” in the medical community, but doctors and scientists now know that a concussion increases the risk of longer-term chronic medical problems, including difficulties with attention, memory, anxiety, depression, and dementia.

In a news release, Dr. Gillian A. Hotz, professor of neurological surgery, and director of the KiDZ Neuroscience Center at The Miami Project and the UM Sports Medicine Institute concussion program, said:

“One thing has eluded us – a clinically proven medication to treat concussion. Whether or not this study leads to a pill that could treat concussion, this type of research will pave the way for UM and other researchers to better manage concussion. It’s a privilege to help lead this journey.”

Gilbert said the university believes the medication will be produced in pill form, but the school is:

“open to any type of delivery method – a strip, ingestion through the nose, intavenous uptake, etc. Though we don’t have confirmation on the treatment’s delivery method, we are working under the assumption that it is going to be a pill.”

TBI plays a role in about 30% of all injury-related deaths in the United States, according to the U.S. Centers for Disease Control (CDC). Injuries at least partly related to TBI kill an average of 153 Americans every day. [2]