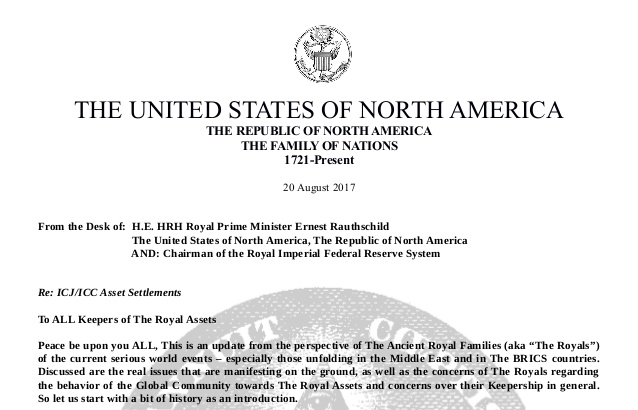 (Stillness in the Storm Editor) There have been rumors and whispers of a council that oversees the "realms of men" but who or what this group is a mystery. According to a document released on August 20th of this year, a group of ancient royals has been in place to watch over humanity for ages of time, answerable to "Galactic Councils." The document issues cease and desist orders to "Keepers" who are the world leaders an average person would recognize, such as the Queen of England, Dragons, and elected officials. But more likely, these keepers are the powers behind public figures, the so-called Cabal, Illuminati, Deep State, Shadow Government, and so on. The document declares that some of these Keepers have violated their original mandates and are subject to removal of power. Furthermore, since October 2015, all assets held by the Royals, such as the collateral accounts, were "returned" and no disbursements from these accounts has taken place. The big question is, how reliable is this document? Is this something real, or just another distraction?
Read more »