I’ve been out of commission for the last 2 1/2 weeks.  Something similar to COVID, (variant?) my body partially recognized it but I had some symptoms I didn’t have the first go around 18 months ago.  I didn’t have much of a fever like I did in 2020,  but in the beginning the body aches were off the chart.  My neighbor had similar symptoms.

I got a hold of some ivermectin and that immediately got rid of the aches and restored my sense of taste. I wish I had known about that therapeutic 18 months ago.  I can attest it does work.  So don’t let the Joe Rogan haters on CNN deter you from something that really does seem to work (and will also deworm you all you Sushi eaters!).  I still don’t have a sense of smell of but I am sure that will come back eventually.

The last week was mostly about clearing my lungs of the secondary infection.   A friend sent me some antibiotics but this never arrived in mail.   Some dear friends did a collective energy healing on my me and that cleared my lungs and broke the low grade fever and got my O2 levels up to where they normally are, so the antibiotics were not in the end necessary.

I haven’t been able to work on my side gig (wasn’t up for it energy wise, and I wouldn’t knowingly expose anyone to this in any case). I have not posted here much despite so much going on.  The level of disinformation out there is still pretty high.

I know there’s lots of people that think COVID doesn’t exist because there’s no genome mapping for it.   My feeling on that is mapping the genome is proof of a crime against humanity and they don’t want that proof out there.   There may also be patent issues as we know this virus was patented.

I really had a disappointing experience with Telemedicine, was told by the assigned doctor that ivermectin didn’t work for COVID, when I had already proved to myself that it did work. I was after a Z-PAK, but just hung up in disgust that any doctor would rather be politically correct than actually help a patient.  Wasted $89 on that Live MD call.   But no worries, I got most of what I needed anyway.

We are in a weird time, and you have to weigh the local situation and I don’t really have a trusted doctor at this point that I am comfortable with.  If I had made a lot of money I’d get a concierge doctor like Joe Rogan but I am not on that kind of budget.

Still I suppose I fared better than the purported death of Robert David Steele at the hands of the hospital in Florida.  If anyone has an obituary or death certificate on him let me know.

I need $800 to make this month’s expenses,  If you can help out it will be most appreciated.

I’ll be posting more that I am on the mend.

Wow, it’s December already!  SO MUCH IS HAPPENING!  How all parts spin out I am not going to predict, but I do know it works out perfectly!  I have a friend that is quite concerned about how the election went and I tried to reassure him that it will be perfect.  Its a bit like a jigsaw puzzle in 3D, the pieces are spinning and moving and you can’t quite see how the 7 billion puzzle pieces fit together, but Source of ALL, or “The ALL” as Heather calls it, knows and is working through all beings to finish this in the way it needs to be done.  There will come a moment when all the parts align and join in unity, and we will all be in awe of what was done.

It’s pretty clear there was massive fraud during the elections facilitated, at least in in part, by the Chinese CCP.  We knew in 2016 the families were not happy with Donald Trump’s election to President of the United States.  The “Donald” had a reputation for doing what he said he was going to do, and that was clean out the swamp in Washington DC  They were going to use ANY means possible to remove him, and we have gone through myriads of hoaxes and impeachment attempts since then.  The election was the weirdest thing I have ever witnessed as I watched numbers reverse on the TV screen, counting stop and delayed and other odd tactics.  Mayor Giuliani and Sidney Powell have unearthed mind boggling vote rejiggering in battle ground states.

Denice is currently very busy with family and work, I don’t expect to hear much through her from Thor or Stan X this month unless something monumental needs to be communicated.  It’s all perfect.  I didn’t really expect to have the inside scoop on these final moments, there is so much at stake, and that would give away details that are critical to finishing all the Universal Cleanup.  I knew this time would come, and it’s a good thing.  And once it’s complete there will be much to share with everyone and Denice and I will be very busy passing on messages.

Heather has been sharing more insights lately and I will forward those messages as I get them.

December is usually a lean month for the blog, so if you can help and enjoy the information, please donate to this work.  I’m not going to repeat a lot of the voter scandal stuff or COVID scandals, there’s lots of good sources doing that right now.  There’s a Terran Cognito donation icon on the right side of the blog on the desktop version or you can scan the QR code below for PayPal on mobile devices.

It appears I am in either need of some brakes work or an axle bearing is squeaking, which is another expense that is coming up.  I did some hard stops because of deer that were in the road and that might have done something to the breaks.  The deer did live on to create more deer, they just get a little crazy during mating season.   I’ll be taking the car in for a repair estimate this week, but the repair itself might have to wait until after the end of the year.  If the required repair is serious, I may have to stop doing ride share driving on weekends for extra cash.  And this is a month were I could really use that extra income.

Thank you all for everything you have done and do! 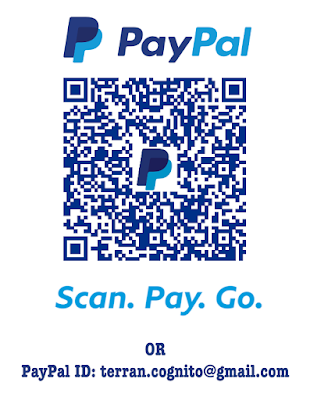