While it’s true that making the right personal choices to stay disease-free may not be bulletproof, making these ‘right choices’ is still the way to go to avoid cancer and other diseases. What we as a collective need to consider, though, is that cancer prevention isn’t totally an individual effort. A good example of this can be seen with pollution, where a study outlines how some of the highest incidences of cancer rest among the most polluted areas in the US.

For this study, the US Environmental Protections Agency’s (EPA) Environmental Quality Index, a county-level measure of over 200 environmental variables, was compared to SEER state cancer profiles. Data on cancer rates was available for 85% of the over 3100 US counties. [1]

The main factors linked with higher cancer rates were air pollution, the presence of highways and the availability of housing and public transport. Of course, highways, public transport, and the location of houses are factors that affect air pollution too. Urban areas showed the strongest associations, most likely because there are more vehicles which consume fossil fuels.

Environmental Protection is the Best Prevention

As for which cancers were most affected by air pollution, breast and prostate cancers seem to have the strongest associations. Maybe instead of the “early detection is the best protection” line used to promote mammograms (which sounds quite like propaganda), how about “environmental protection is the best prevention”?

This is not the only study linking air pollution to cancer. In 2012, the IARC confirmed that diesel exhaust does cause cancer. In the USA alone, diesel fuel use causes over 50,000 deaths every year, and it’s nowhere near as dirty as the diesel used in other countries! [2]

This doesn’t just include cancer, but also emphysema, bronchitis, heart disease, and severe asthma attacks. There is also a link between acute lymphocytic leukemia (ALL) and living close to oil and gas wells.

On the other hand, when air quality regulations in California caused the level of diesel pollution to drop by 68%, the risk of developing cancers from the toxins in diesel dropped by three quarters! Cancer incidence in general has declined in the USA too, due in no small part to “personal” air pollution improvement efforts, i.e. smoking, falling out of fashion. 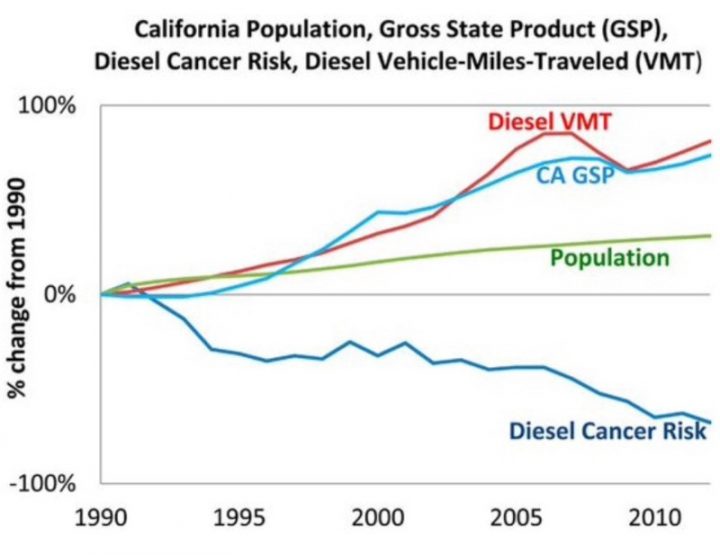 While 451 per 100,000 is still too many, the age-adjusted cancer rate was 511 per 100,000 in 1992, when incidence peaked. So when someone develops cancer, it may not be all their fault. It may be society’s responsibility to clean up the world, so we can all live long, healthy lives, and make what diseases that would remain easier to treat.