Fidget spinners are pretty sweet. They were designed to help people with conditions like ADD to better concentrate, though they have turned into a huge trend in toys. However, there have been a number of incidents involving injuries caused by fidget spinners, prompting the U.S. Consumer Product Safety Commission (CPSC) to issue a new fidget spinner safety guidance for both buyers and businesses. [1]

So far, no deaths have been reported, but a number of children have choked on pieces of the toys, including a 10-year-old girl who had to have one of the bearings from a fidget spinner surgically removed.

The commission says choking incidents have been reported in children as old as 14. Moreover, there have been 2 incidences of battery-operated fidget spinners catching on fire, and 1 incident in which a fidget spinner melted. One kid even managed to chip a tooth on a fidget spinner. [1] [2]

“As the agency investigates some reported incidents associated with this popular product, fidget spinner users or potential buyers should take some precautions. Keep them from small children; the plastic and metal spinners can break and release small pieces that can be a choking hazard; and older children should not put fidget spinners in their mouths.” [1]

Buerkle added in the statement that fidget spinners should be kept away from children under the age of 3.

On the topic of battery-operated fidget spinners, the agency says that buyers should never leave one of the toys charging unattended, never charge them overnight, and always use the charging cable the spinner came with. 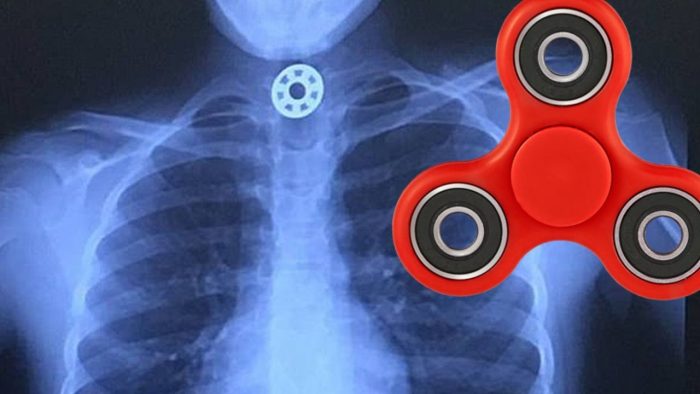 Buerkle said in the statement:

“If a fidget spinner is marketed and is primarily intended for children 12 years of age and younger, companies must certify that their product meets toy safety and other standards, including limits for phthalates, lead content, and lead in paint, if applicable, and the U.S Toy Standard, ASTM F963-16.”

In its business guidance, the commission said that most fidget spinners are considered general-use products, meaning they aren’t actually intended for children, and therefore don’t have to meet those standards.

Related: Here Is Why You Should Avoid Dollar Store Toys

CPSC made several additional safety tips, including this one for parents and children:

The commission also has additional safety tips for using battery-operated fidget spinners, including: