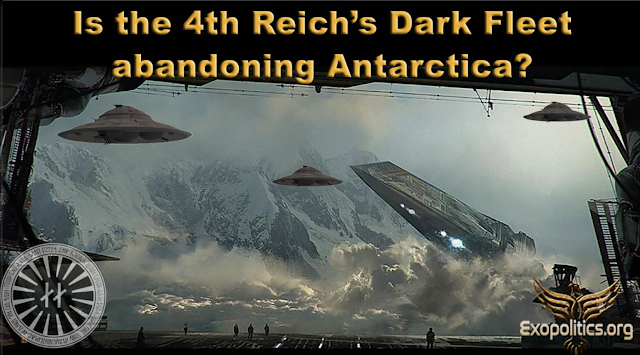 According to Elena Danaan, a former professional French archeologist who claims to be a contactee with the ‘Galactic Federation of Worlds’, an exodus of a German 4th Reich controlled “Dark Fleet” is currently underway that is creating a power vacuum that different nations are trying to fill by building bases in Antarctica. Her information comes from an extraterrestrial from the Taygeta star system in the Pleiades she identifies as ‘Thor Han’, and a current resident at the US McMurdo base who goes by the name ‘Frank’, and whose last name I will keep private.

On June 6, Elena received an email from Frank informing her of an unusually high number of people entering and leaving Antarctica through McMurdo, which is the largest base in Antarctica, and maintains a year-round shipping port through which transport ships arrive with personnel and supplies bound for the US and other national bases.

This is what Frank told Elena in an email that was later forwarded to me:

I want to let you know that the Chinese have 5 bases here already and are setting up 4 more immediately during the absolute worst time of year. There are Chinese everywhere down here and up until a month ago I never saw even one.

Also of note, now Turkey has been sending in troops independently and so are quite a few other countries from Africa & South America all of them want to set up bases here and are bringing in the infrastructure to do so.

Everybody seems to want to get in on whatever is down here as soon as possible to not be left out. I am more certain than ever now that the mad rush is because there is definitely something here. I noticed more and more German speaking people coming through as well. Numbers have always decreased in the winter time down here not increased.

What immediately got Frank’s attention was that a significant number of the personnel leaving Antarctica were German-speaking and they were bound for South America—Argentina in particular. This struck Frank as highly unusual given what Elena and others had said about a German-controlled Dark Fleet in Antarctica that was in an escalating military conflict with an ‘Earth Alliance’ and the Galactic Federation.

On April 30, Elena Danaan, a former professional archeologist whose claims of contact with extraterrestrials from the Galactic Federation of Worlds have gained widespread attention, delivered a bombshell report about an ongoing series of military raids on Mars that aim to destroy the bases of a rival extraterrestrial alliance: the Draconian Empire and the Orion […]

One of the least understand processes in the modern history of UFOs are secret meetings held between US Presidents and extraterrestrial visitors, and subsequent agreements that emerged from them. A number of insiders and eyewitnesses have come forward over the years to share their knowledge of these highly classified events, which continue to remain secret […]

Aloha all, I’ve just finished my powerpoint presentation for tomorrow’s Webinar Intensive on the Great Awakening vs the Global Reset. It will be an information packed Intensive with nearly 140 slides detailing the history and exopolitical processes behind the “Global Reset”, or what the World Economic Forum wants to call the “Great Reset” – there’s […]

In our 2nd interview, Elena Danaan recounts her personal contact experiences, the most dramatic of which involved an abduction at age nine by five gray aliens. In the midst of two medical procedures involving implants, she was rescued by two human looking extraterrestrials using laser weapons. In the interview, Elena explains how her rescuers repurposed […]

This is an historical overview of how the Earth has been run as a prison planet through secret agreements between the Cabal/Deep State and their Reptilian extraterrestrial overlords. The film introduces modern day plans to engineer wars, poverty, disease and genetic modifications that all contribute to covertly fulfilling these agreements. The recent proposal to create […]

This short film presents the history of extraterrestrial intervention on Earth, and how competing factions have warred over humanity’s destiny. Learn how Earth became a prison planet under the control of a negative group of extraterrestrials and their human proxies ( aka the Cabal/Deep State) that have historically manufactured poverty, disease and war. Discover what […]

As the predicted days of darkness temporarily settle in upon the US and world stage, a great effort is taking place behind-the-scenes over the future direction of humanity as many White Hat groups and leaders are stealthily overturning Deep State operations. Among such groups is the Earth Alliance, a loose association of military and political […]