The Organic Consumers Association (OCA) announced July 25, 2017 that it had discovered traces of the RoundUp chemical glyphosate in 10 of 11 samples of Ben & Jerry’s ice creams. The levels were reportedly far below the limit set by the EPA. [1]

The discovery is a bit of an embarrassment to the ice-cream maker because it has billed itself as a non-GMO company since 2014. Thankfully, the levels found were quite low. [2]

In reality, that’s only sort of true. On its website, Ben & Jerry’s says it based its non-GMO standard on the “mandatory declaration requirements of European regulations and the GMO labeling law passed in [their] home state of Vermont.” Based on this standard, the company’s milk and egg suppliers may still use conventional (GMO) animal feeds. [1]

Rob Michalak, global director of social mission at Ben & Jerry’s says the environmentally-conscience company is working to ensure that all the ingredients in its supply chain come from non-GMO sources. None of its plant-based ingredients come from corn, soy, or other known genetically-modified crops. The company is also reportedly teasing out a cost-effective way for the dairy farms that supply its milk to use non-GMO feed.

“We’re working to transition away from GMO, as far away as we can get. But then these tests come along, and we need to better understand where the glyphosate they’re finding is coming from. Maybe it’s from something that’s not even in our supply chain, and so we’re missing it.”

It’s possible that add-ins to the ice cream, such as peanut butter or cookie dough, are sprayed with glyphosate and may be the culprits. [3] 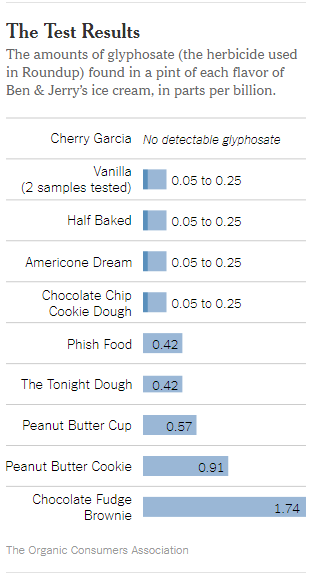 To put things into perspective, a 75-pound child would need to eat 145,000 8-ounce servings each day of the ice cream to hit the limit set by the Environmental Protection Agency. An adult would have to eat 290,000 servings, said John Fagan, the chief executive of the Health Research Institute Laboratories, which did the testing for the Organic Consumers Association.

But despite the extremely low levels of glyphosate, the OCA thinks that any presence of glyphosate is misleading to buyers. [2]

“It’s time for Ben & Jerry’s to announce it will immediately begin transitioning to 100 percent organic. Otherwise conscious consumers have no choice but to launch a national and, if necessary, international protest campaign and boycott.”

Furthermore, according to OCA, reports published by Regeneration Vermont reveal that Ben & Jerry’s suppliers—and Vermont and U.S. (non-organic) dairy farmers in general – “have gone backwards, rather than forward over the past 15 years in terms of environment sustainability, food safety, and nutrition and greenhouse gas pollution.”

Promising years ago to go GMO-free by 2014, Ben & Jerry’s has made strides over the years to make its ice cream more natural, including dropping milk made with Monsanto’s RBST growth hormones. Perhaps the company doesn’t deserve this much heat at this point in time.