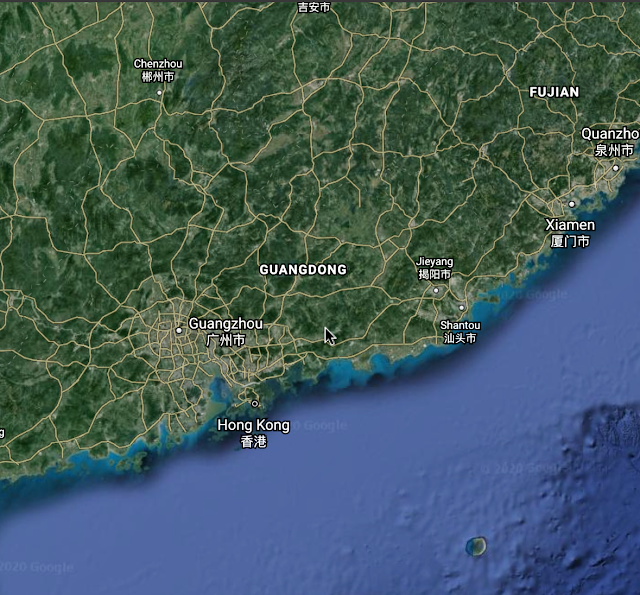 Denice the ever watchful dot connector noticed this reference to Guangdong.  Stan X did mention Guangdong and for some reason I missed the reference thinking it had to do with WUHAN.  Guangdong is actually quite a ways from Wuhan on the Chinese mainland not far from Hong Kong.  Sometimes Denice catches what I miss, sometimes I catch what escapes her attention.

I just read an article from the UK that the virus did not originate in wu han. rather, further south.  so I researched and found this link:

http://thecoronavirus.com/mar19-researchers-discover-covid-19-likely-originated-from-malayan-pangolins/. (copied below in case the above gets deleted)

Guangdong sound familiar?  Location of the asian lab according to Stan.

“ON 24 OCTOBER 2019, LIU AND HIS COLLEAGUES FROM THE GUANGDONG WILDLIFE RESCUE CENTER OF CHINA [1] FIRST DETECTED THE EXISTENCE OF A SARS-COV-LIKE COV FROM LUNG SAMPLES OF TWO DEAD MALAYAN PANGOLINS WITH A FROTHY LIQUID IN THEIR LUNGS AND PULMONARY FIBROSIS, AND THIS FACT WAS DISCOVERED CLOSE TO WHEN THE COVID-19 OUTBREAK OCCURRED. “

The first known COVID-19 survivor had no contact with the fish market. Previous studies indicated that Type L strain of SARS-CoV-2 mutated from Type S and originated at the fish market. The race has been on to identify the 4 short insertions that define where, or what, the original SARS-CoV-2 strain came from.

This research shows promising results it could very well be from the Malayan Pangolins.

The Malayan Pangolin looks like it belongs in a museum alongside warriors armour. Seriously. This strange little guy is endangered and heavily poached in South East Asia.

More research needs to be done, and this needs a bit more explanation too: “discovered from dead Malayan pangolins after extensive rescue efforts.” (?)

Then there’s China’s version of the CDC which was dispatched to Wuhan, Hubei Province: 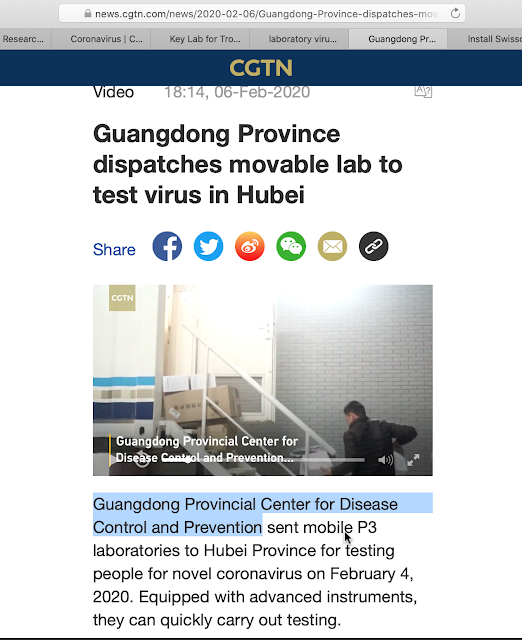 https://www.washingtontimes.com/news/2020/jan/26/coronavirus-link-to-china-biowarfare-program-possi/
Coronavirus may have originated in lab linked to China’s biowarfare program

Radio Free Asia last week rebroadcast a Wuhan television report from 2015 showing China’s most advanced virus research laboratory, known the Wuhan Institute of Virology. The laboratory is the only declared site in China capable of working with deadly viruses.

“Certain laboratories in the institute have probably been engaged, in terms of research and development, in Chinese [biological weapons], at least collaterally, yet not as a principal facility of the Chinese BW alignment,” Mr. Shoham told The Washington Times.
Work on biological weapons is conducted as part of dual civilian-military research and is “definitely covert,” he said in an email.

Mr. Shoham holds a doctorate in medical microbiology. From 1970 to 1991, he was a senior analyst with Israeli military intelligence for biological and chemical warfare in the Middle East and worldwide. He held the rank of lieutenant colonel.

A Chinese Embassy spokesman did not return an email seeking comment.

Chinese authorities said they do not know the origin of the coronavirus, which has killed at least 80 and infected thousands.

Gao Fu, director of the Chinese Center for Disease Control and Prevention, told state-controlled media that initial signs indicated the virus originated from wild animals sold at a seafood market in Wuhan.

One ominous sign, said a U.S. official, is that false rumors circulating on the Chinese internet claim the virus is part of a U.S. conspiracy to spread germ weapons. That could indicate China is preparing propaganda outlets to counter any charges that the new coronavirus escaped from one of Wuhan’s civilian or defense research laboratories.

The World Health Organization is calling the microbe novel coronavirus 2019-nCoV. At a meeting Thursday in Geneva, the organization stopped short of declaring a public health emergency of international concern.

China has deployed military forces to Wuhan to halt all travel out of the city of 11 million people in an effort to contain the outbreak of the virus, which causes pneumonialike symptoms.

The Wuhan institute has studied coronaviruses including the strain that causes severe acute respiratory syndrome (SARS), H5N1 influenza virus, Japanese encephalitis and dengue. Researchers at the institute also have studied the germ that causes anthrax, a biological agent once developed in Russia.

“Coronaviruses [particularly SARS] have been studied in the institute and are probably held therein,” Mr. Shoham said. “SARS is included within the Chinese BW program, at large, and is dealt with in several pertinent facilities.”

It is not known whether the institute’s coronaviruses are specifically included in China’s biological weapons program but it is possible, he said.

Asked whether the new coronavirus may have leaked, Mr. Shoham said: “In principle, outward virus infiltration might take place either as leakage or as an indoor unnoticed infection of a person that normally went out of the concerned facility. This could have been the case with the Wuhan Institute of Virology, but so far there isn’t evidence or indication for such incident.”

After researchers sequence the genome of the new coronavirus, they might be able to determine or suggest its origin or source.

Mr. Shoham, now with the Begin-Sadat Center for Strategic Studies at Bar Ilan University in Israel, said the virology institute is the only declared site in China known as P4 for pathogen level 4. That status indicates the institute uses the strictest safety standards to prevent the spread of the most dangerous and exotic microbes being studied.

The former Israeli military intelligence doctor also said suspicions were raised about the Wuhan Institute of Virology when a group of Chinese virologists working in Canada improperly sent to China samples of what he described as some of the deadliest viruses on earth, including the Ebola virus.

In a July article in the journal Institute for Defense Studies and Analyses, Mr. Shoham said the Wuhan institute was one of four Chinese laboratories engaged in some aspects of biological weapons development.

He said the secure Wuhan National Biosafety Laboratory at the institute was engaged in research on the Ebola, Nipah and Crimean-Congo hemorrhagic fever viruses.

The Wuhan virology institute is under the Chinese Academy of Sciences, but certain laboratories within it “have linkage with the PLA or BW-related elements within the Chinese defense establishment,” he said.

In 1993, China declared a second facility, the Wuhan Institute of Biological Products, as one of eight biological warfare research facilities covered by the Biological Weapons Convention, which China joined in 1985.

The Wuhan Institute of Biological Products is a civilian facility but is linked to the Chinese defense establishment. Mr. Shoham said it is thought to be involved in the Chinese Biological Weapons Convention program. China’s vaccine against SARS is probably produced there.

“This means the SARS virus is held and propagated there, but it is not a new coronavirus unless the wild type has been modified, which is not known and cannot be speculated at the moment,” he said.

“Information indicates that the People’s Republic of China engaged during the reporting period in biological activities with potential dual-use applications, which raises concerns regarding its compliance with the BWC,” said the report, adding that the United States suspects China failed to eliminate its biological warfare program as required by the treaty.

“The United States has compliance concerns with respect to Chinese military medical institutions’ toxin research and development because of the potential dual-use applications and their potential as a biological threat,” the report said.

The biosafety lab is about 20 miles from the Hunan Seafood Market, which reports from China say may have been the origin point of the virus.

Rutgers University microbiologist Richard Ebright told London’s Daily Mail that “at this point there’s no reason to harbor suspicions” that the lab may be linked to the virus outbreak.

CORONAVIRUS spread from a science laboratory in Wuhan and not a ‘wet market’, a group of Chinese scientists have sensationally claimed.

They said scientists researching bat diseases could be responsible for the global outbreak, in a bombshell report published this week. Their report details how sick bats urinated, attacked and bled on researchers, who did their best to quarantine themselves. But the disease still spread through Wuhan, across China and throughout the world.

The new report by biological scientists from the prestigious South China University of Technology in Guangzhou, China, contradicts Beijing, who said it spread from contaminated bats being sold at a food market.

Biologists Botao Xiao and Lei Xiao, published a pre-print entitled “The possible origins of 2019-nCoV coronavirus”, in the report they described how “the killer coronavirus probably originated from a laboratory in Wuhan”.

The report added: “We noted two laboratories conducting research on bat coronavirus in Wuhan, one of which was only 280 metres from the seafood market.  [OKAY WHERE’S THE OTHER LAB????]

“Our proposal provided an alternative origin of the coronavirus in addition to natural recombination and intermediate host.”

The scientists in the alarming report contested official findings that the pathogen first made the jump from bats to humans in the Wuhan wet market.

They said: “The probability was very low for the bats to fly to the market.”

“According to municipal reports and the testimonies of 31 residents and 28 visitors, the bat was never a food source in the city, and no bat was traded in the market.

“There was possible natural recombination or intermediate host of the coronavirus, yet little proof has been reported.”

The researchers screened the area around the seafood market and identified two laboratories conducting research on bat coronavirus.

These laboratories were within 280 meters of the market, one is called the Wuhan Centre for Disease Control and Prevention.

The research concludes that this laboratory hosted animals for research purposes, one of which was specialised in pathogens collection and identification.

The paper claimed: “In one of their studies, 155 bats including Rhinolophus affinis were captured in Hubei province, and another 450 bats were captured in Zhejiang province.”
The expert who studied the collection of bats at the laboratory had described how he was once “attacked by bats and the blood of a bat shot onto his skin”.
The paper added: “He knew the extreme danger of the infection so he quarantined himself for fourteen days.’
“In another accident, he quarantined himself again because bats urinated on him.”

The scientists claim the laboratory is beside the Union Hospital where the first group of doctors were infected during this epidemic.

The paper concluded: “It is plausible that the virus leaked out and contaminated the initial patients in this epidemic, though solid proofs are needed in future studies.”

A second laboratory was identified around seven miles from the seafood market, belonging to Wuhan Institute of Virology of the Chinese Academy of Sciences.

This laboratory reported the Chinese horseshoe bats are a natural reservoir for the severe acute respiratory syndrome coronavirus, SARS-CoV, which caused the 2002 to 2003 pandemic.

It is alleged in the findings the principal investigator from that laboratory had been developing a project which generated a chimeric virus using the SARS-CoV in a technique of genetic engineering called the reverse genetics method.
The paper speculates ARS-CoV or its genetically modified derivative might have leaked from the laboratory.
The scientists said: “In summary, somebody was entangled with the evolution of 2019-nCoV coronavirus.’ [ya think?]
“In addition to origins of natural recombination and intermediate host, the killer coronavirus probably originated from a laboratory in Wuhan.
“Safety levels may need to be reinforced in high risk bio-hazardous laboratories.
“Regulations may be taken to relocate these laboratories far away from city centres and other densely populated places.”
Express Online contacted the two scientists who produced the report to seek further confirmation of their claims.
…..
I”m not sure we’ve found the Guangdong lab, research is ongoing…