There is ample research which should give parents pause when considering whether to let the TV babysit their kids. One study even suggests that too much tube time can lead to poor bone health later on.

I don’t like to bash TV. A decade ago, I worked with teen moms and their babies in a group-home setting, and nothing seemed to calm the little ones quite like Baby Einstein videos. Those videos also had a soothing effect on my nieces and nephews when they were babies.

Baby Einstein videos are both colorful and educational, and they benefit adults, too, by helping them to not lose their minds.

However, in excess, TV can be very harmful to children, both physically and psychologically. The evidence is overwhelming.

Science says you can tell the difference between children who were regularly being read to in infancy and children who were entertained by a TV or some other form of electronic screen by how talkative they are.

The interactive activity of reading to a child tends to produce “chattier” kids, whereas kids who are left to zone out in front of the boob tube don’t have as much to say. This is because children who are read to end up developing better language skills.

Last year, a study presented at the Pediatric Academic Societies annual meeting revealed that kindergarten-age children who watched more than an hour of TV a day were 39% more likely to become overweight and 86% more likely to be obese by the time they entered 1st grade.

Yet another study, published in 2013 by Public Health England, showed that British kids who spent most of their time in front of TVs and computer screens had more depression and anxiety, and limited social interaction and physical activity. [1]

Participants who consistently watched 14 hours of TV per week were found to have lower bone mineral content than those who watched less TV, even after researchers adjusted for physical activity, height, body mass, calcium intake, vitamin D levels, alcohol, and smoking, all at age 20. [2] 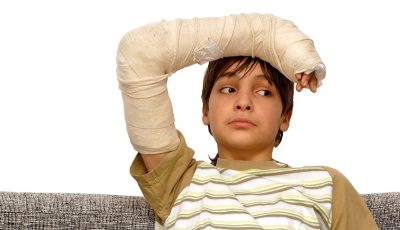 “Since attainment of optimal peak bone mass is protective against osteoporosis later in life, reducing sedentary time in children may have long-term skeletal benefits.” [2]

The researchers believe that healthy bone growth may be adversely affected by the high- fat and high-sugar foods that typically go hand-in-hand with long hours of TV watching. [1]

It’s understandable that a child may not want to play outside on a 95-degree day, but the dog days of summer shouldn’t be spent in front of the TV. Opt for a trip to the pool, or find an indoor activity that requires your child to concentrate and move around a little.