Natural oil and gas companies insist that hydraulic fracturing (fracking) is a safe process, but many scientists are arguing that the drilling practice causes earthquakes – which aren’t terribly safe. Now, a new study shows that injecting wastewater from fracking underground can trigger earthquakes miles away from the site. [1] 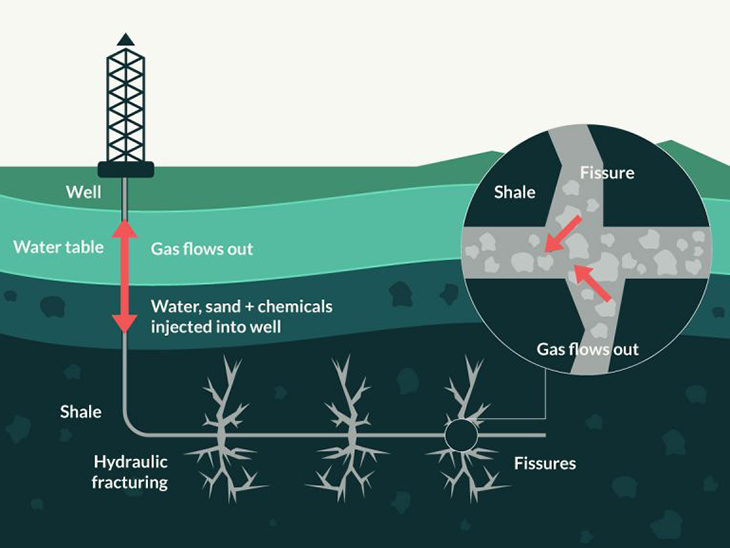 In the United States, 2 billion gallons of fossil-fuel-industry wastewater gets pumped underground through thousands of underground tubes. The purpose of injecting wastewater is to store it out of sight and to keep it from entering drinking water.

But not being able to see the brine- and chemical-filled liquid doesn’t mean it’s harmless. The recent study, published in the journal Science, shows that injecting wastewater can trigger earthquakes far from injection wells.

The problem is so serious that 1 in 50 people in the U.S. are at-risk of experiencing a fracking-related earthquake, according to a recent U.S. Geological Survey (USGS) analysis. Wastewater injection wells are concentrated in Oklahoma, Texas, California, and Kansas, according to the U.S. Environmental Protection Agency (EPA).

Earthquakes caused by injection wells have rattled Texas, but Oklahoma has been particularly hit hard by the temblors. Earthquakes used to be a rarity Oklahoma, but the state has experienced a 2,800% increase in quakes from 2009 to 2014. Experts have warned that the “big one” could slam Oklahoma at any time.

In 2011, scientists linked an injection well in the state to a 5.6-magnitude earthquake that damaged a highway, rattled buildings, and generated dozens of aftershocks.

Emily Brodsky, Professor of Earth and Planetary Sciences at the the University of California, Santa Cruz, said: [2]

“Induced earthquakes are becoming more and more of an issue in central and the eastern U.S.”

Writing for The Conversation, Brodsky explained that she collaborated with her colleague, Thomas Goebel, to find out how injection wells cause earthquakes so far away.

The duo examined injection wells around the world to determine how the number of earthquakes changed with the distance from injection. They found that some wells triggered quakes up to 6 miles away. And while conventional wisdom states that injecting wastewater into sedimentary rock rather than harder underlying rock reduces the risk of triggering larger and more distant earthquakes, Brodsky and her colleague found the opposite to be true.

“At first glance, one might expect that the most likely place for wastewater disposal to trigger an earthquake is at the site of the injection well, but this is not necessarily true.”

Earthquakes Could Appear Miles Away – Here’s Why

She explained that injecting wastewater underground can create a pressure that changes the shape of the surrounding rock and pushes faults toward slipping in earthquakes. This is called “poroelasticity.” Water doesn’t have to be injected directly into the fault to trigger earthquakes via poroelasticity, so the process can trigger them far from the injection well.

Brodsky and Goebel were able to identify 2 types of earthquakes triggered by injection wells, and this largely depended on what type of rock the wastewaster was being injected into. [1]

One type of earthquake formed close to the injection well, but stopped abruptly approximately a half-mile from the site. Earthquakes were more likely to form close to the site if the wastewater was injected into rigid bedrock (basement rock). There, pressure from water that spilled into a fault triggered the earthquake.

The other type of earthquake could form far from the well, often several miles away. This occurred when wastewater was pumped into softer sedimentary rock.

Brodsky gave the example of stepping on a latex balloon sitting in a cardboard box. The balloon bulges outward and presses against the walls of the box in the process. Likewise, as sedimentary rock balloons out from the injection of wastewater, it can push faults far from the injection well, resulting in seismic activity at a distance.

Deep disposal wells are quite small – less than a foot in diameter – so it’s unlikely that a fault will intersect directly with a fault that is ready to shift and cause a temblor. But at greater distances from the well, more faults are affected, and that increases the chance of encountering a fault that is “ready to blow,” so to speak, according to Brodsky. [2]

But since the pressure that a well exerts decreases over distance, it’s not clear how far earthquakes may occur from injection wells, she explained.

She anticipates that “there will be some resistance to this” study. [1]

“Multibillion-dollar industries are, you know, not rapid to change.”

Fracking giant Cabot Oil & Gas Corp. is suing Dimock, Pennsylvania resident Ray Kemble and his attorneys for $5 million after Kemble accused the gas driller of polluting residential wells in Pennsylvania. Cabot alleges that Kemble and his lawyers extorted the company through a “frivolous” lawsuit. [1]

In 2013, an EPA official wrote in an internal report that fracking conducted by Cabot Oil & Gas Corp. caused methane to leak into domestic water wells in Dimock, completely contradicting Cabot’s assessment, which said the methane gas was naturally occurring. [2]

State regulators initially got involved in 2010 and said Cabot’s drilling contaminated local wells, though a subsequent EPA investigation in 2012 found the water posed no health risks to Dimock residents.

Though the 2013 report didn’t exactly contract the EPA’s finding that the water was safe to use, it did show that at least one official determined that Cabot’s work damaged water wells.

Now, Cabot is suing Kemble, claiming that his efforts to garner media attention to his polluted well “harmed” the company. The energy company alleges in the suit that Kemble’s actions breached a 2012 settlement that was part of an ongoing federal class action lawsuit over Dimock’s water quality.

Kemble says that even now his water “burns the back of your throat, makes you gag, makes you want to puke.” According to the outspoken Pennsylvanian, who, along with other community members, was featured in the 2010 documentary “Gasland,” said that things only got worse after Cabot fracked 3 wells near his house. [3]

In August 2017, scientists from the Agency for Toxic Substances and Disease Registry (ATSDR), a public health agency, again tested the water at Kemble’s home and about 2 dozen other houses.

A report released by the ATSDR in 2016 found contamination in some of Dimock’s well-water, but the tests did not look at what was casing the contamination. [4]

“Cabot will protect its rights and pursue justice against those who irresponsibly and maliciously abuse the legal system.” [1]

In April 2017, Kemble and his lawyers filed a federal lawsuit accusing Cabot of continuing to pollute Kemble’s water supply. However, the suit was withdrawn 2 months later. [3]

According to Cabot, the claims Kemble made in the lawsuit were the subject of a 2012 settlement between the driller and dozens of Dimock residents – including Kemble – and were barred by the statute of limitations. Cabot claims in the lawsuit that Kemble had breached the 2012 settlement by publicly discussing the company and the alleged damage it did to his water supply.

In 2016, some of Kemble’s neighbors, who had refused to sign a settlement agreement with Cabot, were awarded $4.2 million by a jury. However, in March 2017, that ruling was overturned. [4]

The judge overseeing the case ordered a new trial.