(Exploring Your Mind) Emotional hygiene is just as important as physical hygiene. It refers to a series of preventive strategies to help individuals prevent mental illnesses and discomfort.

The post Emotional Hygiene: Prioritizing Your Well-Being appeared on Stillness in the Storm. (Melissa Smith) Many people get diseases from bacteria, viruses, and other pathogens because of poor hygiene. However, a new study shows that being too clean also makes you prone to superbugs. This raises more concern as the number of people who become ill and die from antibiotic-resistant germs is increasing globally.

The post Yes, You Can Be Too Clean – and It’s Making You Prone to Superbugs appeared on Stillness in the Storm.

When you step into the shower, you’re expecting to come out all clean and shiny. But as a study shows, your shower-head may be dumping risky bacteria all over you – bacteria that can even cause lung infections.

You (hopefully) keep your toilet and sink clean, but be honest – you don’t pay all that much attention to your shower-head, do you? You might want to give it a good scrub, though, because researchers found that in some places within the U.S. and Europe, germs known as mycobacteria are found in abundance in shower-heads. These are also the same places where bacterial lung infections are most common. In the U.S., that includes parts of Southern California, Florida, and New York.

“We live in a world covered in bacteria, and the bacteria in our showerheads follow some interesting geographic trends, and can be altered by our water source and water chemistry.

We’re exposed to microbes constantly in our day-to-day lives, some beneficial, some innocuous, and a few potentially harmful.”

Shower-heads and water distribution systems are teeming with bacteria, and while most of them are harmless, some of them can cause lung infections. The presence of mycobacteria doesn’t mean you’ll get sick or that you’re more likely to develop an infection, but if you’re already susceptible to infections, you should get to cleaning.

Though the study couldn’t even say with any certainty whether a person with a lung infection got it from their shower or not, that doesn’t mean it’s not important to make the public aware of their presence.

“We don’t want people rushing home and throwing away their shower-heads or obsessively cleaning them every day, nor should anyone change their showering habits – swallowing the water is OK.”

For the study, Gebert and his colleagues analyzed shower-heads from homes across the U.S. and Europe. They found tons of bacteria, though the types they detected varied by location and by the chemistry of the water and its source.

One surprising finding was that homes whose water was treated with chlorine actually had higher levels of certain germs.

“I don’t think there are necessarily any negative implications from our study. But because bacteria that can cause illness live in our showerheads, it’s important to understand how people can be exposed to them.”

Shower-heads, after all, are wet, and bacteria thrive in moist conditions. They form colonies, like mushrooms, and thrive in water. [2]

There are about 200 species of mycobacteria that occur naturally in the environment. Most non-tuberculous strains of the bacteria are harmless. Some, however, can cause nontuberculous lung infections, which are an increasing threat to public health.

Read: 1,300 Patients at Pennsylvania Hospital May Have Been Exposed to Dangerous Bacteria

“This is a reminder to clean your shower-head, which nobody does.”

(I’ll admit it. I don’t clean my shower-head very often.)

However, he said, “most of us are likely to tolerate mycobacteria and not get sick from it.”

You don’t have to worry about a massive outbreak of lung infections, but you may be more vulnerable if you are run down or have a compromised immune system or a chronic condition, according to Siegel.

He recommends cleaning your shower-head every week or 2 with a disinfectant that contains ammonia, but you can easily replace the harsh chemical with natural cleaners, such as hydrogen peroxide, baking soda, and others.

The study is published in the journal mBio.

Young children are constantly wiping their noses and sticking their fingers in their mouths. Kids in daycare are forever bringing home germs and passing them along to the rest of the family. But a new study suggests that kids may develop fewer respiratory infections, miss less days of school, and reduce their chance of being prescribed an antibiotic if they use alcohol-based hand sanitizer instead of soap and water to clean their hands. [1]

Researchers in Spain studied 911 children up to age 3 who attended 24 daycare centers in Almeria, Spain. The children, their parents, and their daycare centers were divided into 3 groups:

All 3 groups attended hand hygiene workshops before the study began. The hand-sanitizer and soap-and-water groups went to follow-up workshops where they were educated on respiratory infections and fevers, and received hygiene protocols for hand-washing before and after lunch, as they arrived home after coughing, sneezing, or blowing their noses.

Dr. Don Goldmann, chief medical and scientific officer emeritus at the Institute of Healthcare Improvement, who was not involved with the study, said:

“I think that the main contribution of this paper is its focus on really young children in daycare. I think this does build on previous literature to support the notion that you can reduce the spread of respiratory tract infections in really young kids if you use alcohol hand sanitizer.”

Alcohol-based hand sanitizers are considered safer and more effective than triclosan-based hand sanitizers, which are no longer sold on store shelves. The U.S. Food and Drug Administration (FDA) banned the use of triclosan in antimicrobial soaps after finding that the chemical – along with nearly 2 dozen others – were not “generally recognized as safe and effective” (GRASE) for use in over-the-counter (OTC) healthcare antiseptic products. [2]

Triclosan-containing antiseptic products were introduced to the market without first being subjected to pre-market reviews. Therefore, hand sanitizers and other products containing the chemical lacked sufficient safety and efficacy data.

Triclosan has been linked to antimicrobial-resistant superbugs in studies. Furthermore, research has shown triclosan to interfere with hormone regulation in animals. Plus, researchers say the ingredient isn’t any more effective at killing germs than plain old soap and water. 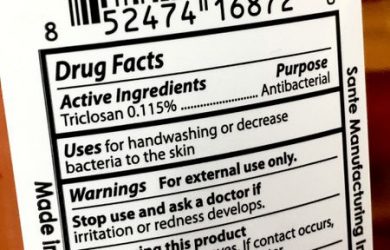 Dr. Janet Woodcock, director of the FDA’s Center for Drug Evaluation and Research, said in a September 2016 press release: [3]

“Antibacterial hand and body wash manufacturers did not provide the necessary data to establish safety and effectiveness for the 19 active ingredients addressed in this final rulemaking.

Consumers may think antibacterial washes are more effective at preventing the spread of germs, but we have no scientific evidence that they are any better than plain soap and water. In fact, some data suggests that antibacterial ingredients may do more harm than good over the long-term.”

While alcohol sanitizers have a better reputation, this notion may be slowly starting to change. A more recent study shows that these products, too, are breeding superbugs.

According to the U.S. Centers for Disease Control and Prevention (CDC), using soap and water is still the best way to wash your hands. However, the agency says that the use of hand sanitizer containing at least 60% alcohol is a good alternative. The CDC notes that hand sanitizers are not as effective when hands are visibly dirty or greasy. [4]

Regardless, toddlers and preschool-age children should never be permitted to use hand sanitizers without adult supervision, as they may be tempted to put some of it in their mouths or they could get it in their eyes.