Life isn’t always easy for night owls (one who often stays up late at night). They’re not the ones to hop out of bed early in the morning and enjoy a fresh cup of coffee. Unfortunately, being a night owl comes with some other harsh realities, too, including a greater risk of health problems not necessarily faced by morning people.

Recently, a group of scientists from a number of institutions carried out the most extensive review of research to date on the health risks associated with being a night owl. Staying up late does put you at higher risk for certain health problems, but there are ways to mitigate some of those risks.

The scientists involved in the review wanted to get a deeper understanding of chrono-nutrition – the relationship between circadian rhythms and eating patterns – and overall cardiometabolic health.

Scientists are working to figure out if these changes can lead to long-term health problems.

The study found that night owls tend to have less healthful eating patterns, which appears to be the main problematic factor.

Studies show that food intake can affect the body’s internal clock. In fact, shift workers have a greater risk for cardiovascular disease, cancer, and metabolic syndrome because they are unable to follow the body’s natural patterns. And eating at irregular intervals can increase the risk of Type 2 diabetes, high blood pressure, and obesity.

In the study, those who preferred the nighttime also consumed more alcohol, sugar, and caffeine than morning people. They also tended to skip breakfast, though current research indicates that skipping breakfast isn’t as bad as we previously thought (not bad at all, actually).

The night owls in the study were less likely to eat a healthy amount of vegetables and grains. As well, they ate less often but consumed bigger meals.

Read: Your Brain Has Two “Time-Keeping Devices” for Sleep

It’s not surprising, then, that night owls had an increased risk of heart disease and metabolic conditions, including Type 2 diabetes. In fact, night owls were 2.5 times more likely to have diabetes than early risers.

“In adulthood, being an evening chronotype is associated with greater risk of heart disease and Type 2 diabetes, and this may be potentially due to the poorer eating behavior and diet of people with evening chronotype.

Our review also found that people who have a poorer control of their diabetes are more likely to be evening types.” 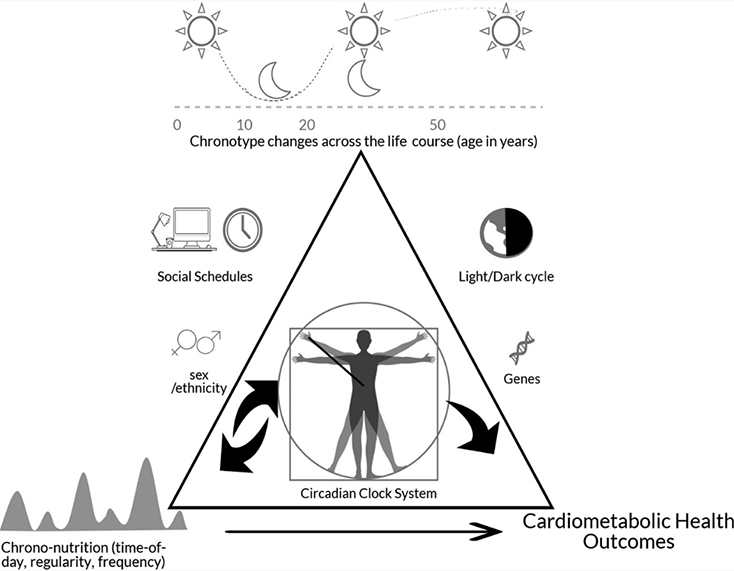 Glucose levels decline throughout the day and are at their lowest by the evening. But because night owls tend to eat later in the day, their glucose levels spike right before bedtime. This is thought to run contrarily to the way the body’s internal clock is set up.

Additionally, the study suggests that your chronotype can change as you age. Younger people tend to be morning chronotypes, but their schedule often flips as they age. [2]

Teenagers are more likely to be night owls, a preference often carrying into adulthood. But over the years, a person’s chronotype can switch.

The authors of the study write:

“While over 90% of 2-year-olds have a morning preference, this declines to 58% by the age of 6, and shifts further towards an evening preference during puberty.”

But as a person reaches, say, their early 50’s, they tend to prefer mornings. So if you’re usually turning out the lights just as other people are waking up, you might not always stay that way.

The question is, by the time you reach that point, have you done irreversible damage to your body?

In the meantime, if you’re in a situation where you have no choice but to stay up late due to work or school, eating more healthfully and drinking less alcohol may reduce some of these health risks, the researchers said.