In the largest survey to date on cannabidiol (CBD) usage, researchers found that nearly half of people using the products were able to quit using pharmaceutical drugs – something the pharmaceutical industry has long feared would happen.

The Brightfield Group and HelloMD – an online community that brings together doctors and cannabis patients – surveyed 2,400 people from HelloMD’s community of 150,000 members about their usage of CBD products and their effectiveness. [1]

“This study is exciting because it shows there is potentially a huge barely-tapped market for CBD products that could improve the lives of many people. With further research and public education, CBD could be an effective alternative treatment for many people, particularly at a time when our nation is in the midst of an opioid crisis.” [2]

Though the federal government has expressed wishes to crack down on medical marijuana, the facts show that CBD and other cannabis products are already helping people prevent and overcome opioid addiction. States with medical marijuana laws see decreased opioid use. A 2014 study found that cannabinoids may make it easier for the body and brain to detox from cocaine, amphetamines, and other hard-to-kick drugs.

Before we go into the results of the survey, let’s have a crash course (or a refresher course) on cannabinoids and what they do.

Of the many cannabinoids found in marijuana, there are 2 primary ones taking the spotlight – CBD and THC. Both have medicinal qualities. THC, the psychoactive compound in cannabis that gives users a feeling of being “high,” is an analgesic. By comparison, CBD does not have psychoactive qualities, but has anti-inflammatory, anti-anxiety, anti-psychotic, and anti-convulsive properties. 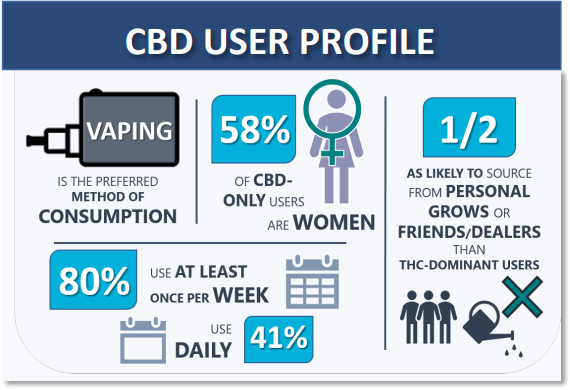 Of the community members who participated in the survey, vaping was the preferred method of CBD consumption. The majority of CBD-only users were women (58%), and women accounted for 55% of CBD users, overall. It was the men who favored THC-dominant products. [3]

The conditions most commonly treated with CBD were depression, insomnia, anxiety, and joint pain. Participants also listed muscle tension or strain, migraines or tension headaches, severe or chronic pain, arthritis, and nausea as conditions they eased with CBD. 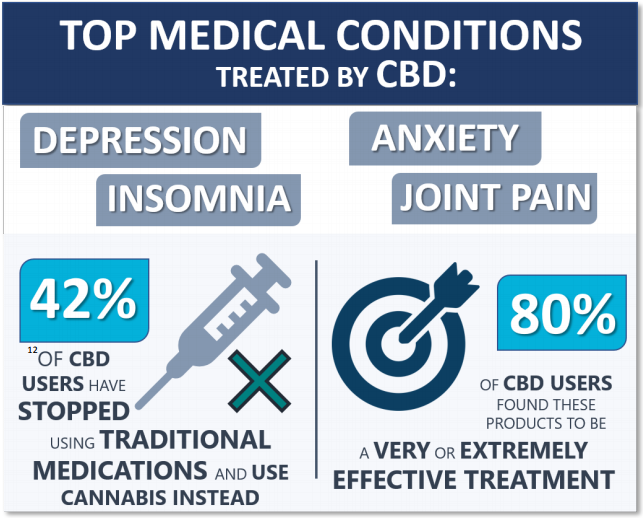 CBD worked so well for these conditions, in fact, that 42% said they were able to quit using traditional medications. Participants were able to kick to the curb prescription drugs like Vicodin and Ambien, as well as over-the-counter (OTC) meds including Tylenol (70%), Bengay, and even certain herbal and other natural remedies.

Unsurprisingly, 90% of respondents said they would purchase cannabis products again.

Moreoever, slightly more than 40% of those surveyed said the CBD product they used was “much more effective” than OTC products, and about 30% said the same of CBD’s efficacy compared with prescription products. 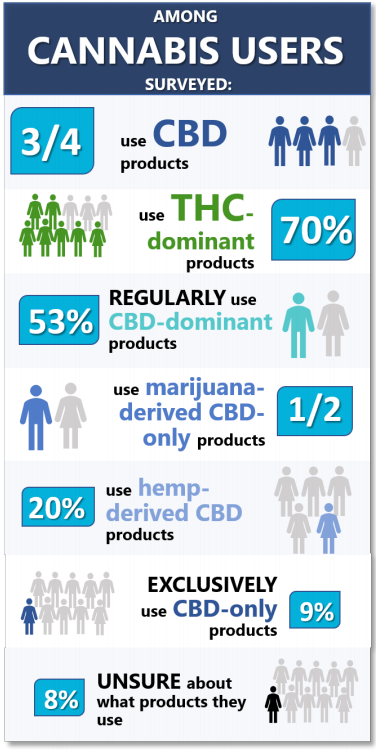 “We are seeing an exponential rise in the interest of CBD products from our patient community—particularly among women. While we still have much to learn about CBD, we cannot ignore this one fact; the majority of those using CBD product today receive great benefit. This has the potential for far-reaching consequences.” [2]

Supporting Past and Other Current Findings

Earlier this year, a survey showed that 63% of respondents said they had replaced their pharmaceuticals with cannabis. This poses a clear and present danger to drug companies, which is why so many are helping to fund anti-legalization efforts.

One such company is Insys Therapeutics. The company fought medical marijuana in Arizona, and the drug maker received DEA approval early in 2017 for a synthetic marijuana drug.

Help me figure this one out, readers: Marijuana is a Schedule I substance, but Insys’ synthetic THC drug, Syndros is only a Schedule II – the federal government’s way of deeming Syndros less dangerous than the actual plant you grow, pick, dry, and smoke. [4]

I think we need to re-evaluate our collective stance on this much vilified plant.