I’ve been have snippets of memories returning.  It’s funny what triggers them, a movie scene, art, music, but the emotional wallop they pack is astounding.

When I was living in Portland last summer I had a big one hit while watching the Chinese TV series called “The Disguiser” on Netflix.  I love foreign movies and don’t mind the English subtitles.  It’s like watching a movie on Skype I suppose. 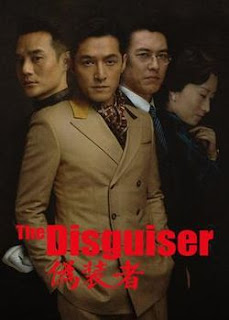 There is a character called Ming Tai, who was in the Chinese resistance against the Japanese Imperial invasion of Hong Kong and Shanghai during WWII.

One scene had the wealthy protagonist driving with a young lady in an open top 1930s coupe with big headlights down a road lined with large timber bamboo.   It was like getting slapped in the face as I knew that image and I realized I knew the entire story because it was either my, or Nabrac’s story prior to this American incarnation.   Stan X confirmed it was from the Nabrac experiences, he had the experience of being Ming Tai and explains his familiarity with the Chinese culture. I knew the entire plot as it was my story!   I was gob smacked.

I had a couple more of those moments this week.   The 2nd one came while watching a Canadian film about Chinese Americans in Seattle, called “Dim Sum Funeral”.   The matriarch of the family (spoiler alert) fakes her death to unite her squabbling children (who do not speak Chinese) before she really does die of liver cancer.   The children don’t like each other all that much, mostly because the mother was mean and pitted them against each other as they were growing up.   The movie is about reconciliation.

In one scene a famous Chinese Pianist comes to the funeral from China to pay his respects, he’s a past secret lover of the mother and a secret father to one of the children.  While he’s outside by the pool doing the ancient art of Tai Chi, the siblings quietly join in the Tai Chi exercises.  The scene was sweet but emotionally it was devastating for me.  Huge lump in my throat like I have lived a moment like that. I don’t know where or when but it was sooooo familar.  Its likely from the Ming Tai inbodyment of Nabrac.

The third incident has been building for sometime.  It started with this song which was published the week Heather and I left the Italian Alps, the timing is most interesting to me (another codex hit):
For me the song is a deeply haunting tune, but I didn’t exactly know why.   It speaks to emotions most men have about women we love.
Yesterday I was watching a documentary on NHK (in English) about the anime director Miyazaki and his creative process while developing the movie Ponyo.  Miyazaki takes a trip to the Tate Museum in London (another internal codex point, as I used to deliver limited edition art prints for a printing company as a teenager to the Tate Museum in Scottsdale Arizona).  Miyazaki is deeply moved by the painting “Ophelia” by Sir John Everett Millais.

It’s a remarkable painting (shown below in part) for its detail.  A woman in elegant gown floating blissfully alive in water.   Which pinged another internal codex item in me, the Lady in the Lake of King Arthur legends, which if memory serves me was Heather (I need to check my notes).  Not that I know what that was all about, legends often diverge in amazing ways from the original story.  The “Tree of Life” is a good example of this stuff of myths, what was done as a cosmic joke became a religious icon.  The Humor gets lost in religion.  More on that later.  BTW, KP was Merlin of that time, and now he’s a Hawaiian “Merlin” opening and closing star gates and energy vortices.

Which led me to ask this of Stan X:

Did Heather ever have an incarnation where she was known as Orphelia?

I thought I’d share how this internal codex thing works, its not just about memory retrieval, its also works as a data verifier.

For example, Heather (who taught me about internal codices) had a crush on some TV actor named “Parker” as a young girl.   When ever the name Parker comes up in her experiences, it generally points to either someone who is not what they claim, or someone playing or acting a role, as is “Parker” who was the FBI agent in the TN trial.

Since all reality is specific to the person experiencing it, everyone has their own unique internal codex.  To make use of it, you first have to be aware that you control your reality and experience and are NOT a victim of circumstance (that’s a hard one to learn), and that the ALL is constantly communicating to you while you are experiencing in myriads of ways.  Jung called this “synchronicity”.  Messages can come from art, frequently in music, and strangers you met once.   You can always ignore the messages, but its there to make your journey more pleasant.  It’s all choice.

Since the ALL is everything, it communicates through everything.