Not getting enough sleep can cause a slew of health problems that generally are aware of, but research suggests it may cause a couple of other conditions you wouldn’t normally associate with sleep deprivation: loneliness and isolation.

What’s more, your lack of sleep doesn’t just affect you; sleep-related loneliness can be “contagious,” proving that the old saying “misery loves company” is entirely accurate.

Yes, a lack of sleep can make you feel alone and isolated and can actually drive you to distance yourself from people even more. In the study, people who didn’t get enough Z’s were viewed by others as being lonelier and less socially “attractive” compared with people who were fully rested. The authors said this indicates there may be a “viral contagion of social isolation” that comes with not getting enough rest.

The findings raise the possibility that there is a connection between concurrent increases in sleep deprivation and social isolation in populations in developed countries. The question is, are lonely people simply less likely to get quality sleep, or does a lack of sleep lead to loneliness?

In a statement, lead study author Eti Ben Simon, a postdoctoral fellow at the Center for Human Sleep Science at the University of California, Berkeley, said:

“It’s perhaps no coincidence that the past few decades have seen a marked increase in loneliness and an equally dramatic decrease in sleep duration. Without sufficient sleep, we become a social turnoff, and loneliness soon kicks in.”

A 2016 study published in the journal Science Advances suggests that the world is in the midst of a “global sleep crisis.” Scientists tracked the sleeping patterns of people worldwide, as well as information regarding study subjects’ age, gender, and exposure to natural light where they lived. 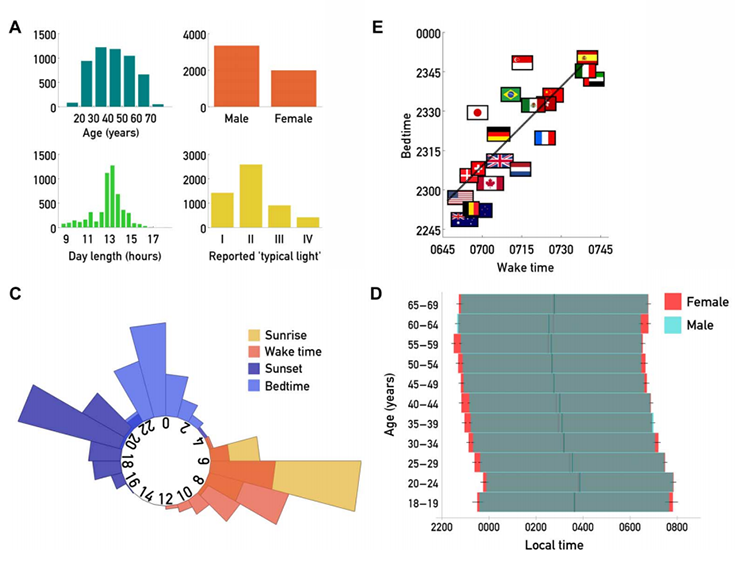 The study found that even a difference of 30 minutes in sleep duration can drastically affect a person’s health and ability to function. The authors concluded that “impaired sleep presents an immediate pressing threat to human health.”

There’s a lot of unhappy people in the world, and it’s not hard to understand why. In 1942, Americans got about 7.9 hours of sleep, on average. Today, the average American only gets an average of 6.5 hours of snooze time. [2]

Dr. Matt Walker, founder and director of Center for Human Sleep Science at University of California-Berkeley and lead author of the study, said:

“Mother nature took millions of years to perfect our sleep and we just shaved off over an hour to fit our lifestyle.”

Americans and people in other developed countries have become too busy, and they’re paying for it with their health, mental state, and social relationships.

The Link Between Sleeplessness and Loneliness 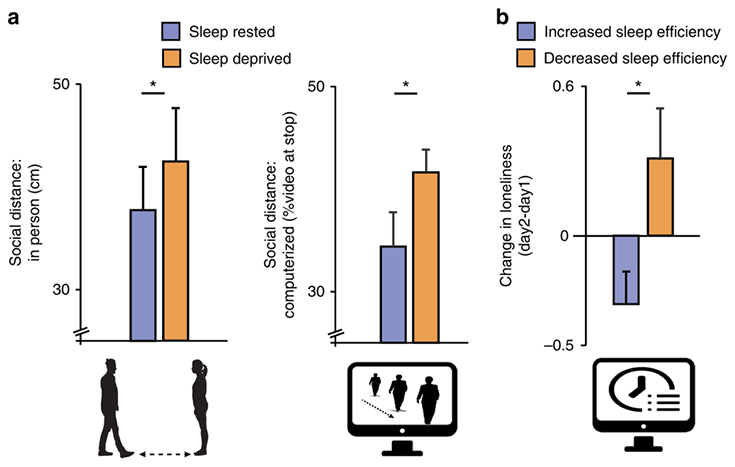 In an effort to better understand how sleep deprivation negatively affects social relationships, researchers conducted a series of experiments that paired brain scans with surveys to help rate the participants’ loneliness. They also showed the volunteers videos that simulated real-life scenarios.

The small study examined the social and neural responses of 18 healthy participants at 2 times: after a night of adequate sleep, and after a sleepless night.

Brain imaging of the participants’ neural activity showed the tired participants’ social aversion and it was remarkably similar to what is seen in a person who feels that their personal space has been invaded.

In sleep-deprived study subjects, fMRI images showed less activity in the regions of the brain that usually promote socialization.

“Being able to see which parts of the brain were actually shutting down in the sleep-deprived population was the most riveting part of the study.”

For the next part of the study, the researchers asked more than 1,000 online observers to view short video clips of study participants discussing day-to-day topics. The sleep-deprived participants came across as lonelier, and after watching videos of these individuals, the online observers said that they, too, felt more loneliness and alienation.

Even losing 10 to 15 minutes of sleep made people feel lonelier – a concerning discovery, considering loneliness can cause health problems of its own.

In fact, a study published in 2017 found that loneliness and social isolation may be even deadlier than obesity or smoking 15 cigarettes a day. Loneliness was so deadly that the authors considered it a stronger predictor of mortality than obesity.

“Loneliness is not benign and it actually increases your mortality risk over 45%.”

Ironically, if you struggle with loneliness, you’re not alone (pun intended). Nearly half of the U.S. population reports feeling lonely or socially alienated.

But you can (pardon the pun) rest easy. Unless you have a bonafide sleep disorder that requires treatment, there’s an easy fix for the loneliness and isolation that comes with a lack of shut-eye.

“On a positive note, just 1 night of good sleep make you feel more outgoing and socially confident, and furthermore, will attract others to you.”

You can read the study for yourself in the journal Nature Communications.

Obesity always makes headlines for being one of the biggest health threats in the U.S. (as well as globally). But according to a recent study, loneliness and social isolation may be even more deadly than obesity or than smoking 15 cigarettes a day. Lack of social connection can be so deadly, in fact, that the feeling of loneliness is a stronger predictor of mortality than obesity. [1]

Social isolation and loneliness are different, but they are typically connected. Social isolation, or lack of social connection, means you have a lack of contact with other people. Loneliness is more about lacking an emotional connection, and it’s something you can feel even if you’re surrounded by people.

Julianne Holt-Lunstad, who is a professor of psychology and neuroscience at Brigham Young University in Provo, Utah, and her colleagues discovered that social isolation and loneliness may increase the risk of premature death by as much as 50%.

The researchers came to these conclusions by conducting two meta-analyses of studies exploring potential links between loneliness, social isolation, and mortality. [2]

Their findings were presented at the 125th Annual Convention of the American Psychological Association, held in Washington, D.C.

More than 300,000 adults encompassing 148 studies were involved in the first meta-analysis, while the second included 70 studies involving over 3.4 million adults.

In the first meta-analysis, Holt-Lunstad and her team found that the risk of dying early was 50% lower among people who said they had good social connections, compared with those who reported being more socially isolated.

The team found in the second meta-analysis that loneliness, social isolation, and living alone all increased the risk of early death.

Overall, the combination of loneliness, social isolation, and living alone was found to increase the risk of premature death as much, if not more, than obesity and other major health conditions. By comparison, obesity increases the risk of dying before age 70 by about 30%. [1] [3]

“There is robust evidence that social isolation and loneliness significantly increase risk for premature mortality, and the magnitude of the risk exceeds that of many leading health indicators.” [3]

This, according to Holt-Lunstad, is worrisome considering that the aging population is growing. [2]

“Indeed, many nations around the world now suggest we are facing a ‘loneliness epidemic.’ The challenge we face now is what can be done about it.” [2]

“Being connected to others socially is widely considered a fundamental human need––crucial to both well-being and survival.

Extreme examples show infants in custodial care who lack human contact fail to thrive and often die, and indeed, social isolation or solitary confinement has been used as a form of punishment.

Yet an increasing portion of the population now experiences isolation regularly.” [3]

That’s why she believes that social connections must be treated as a public health concern. To ease the burden, Holt-Lunstad says she thinks policy makers and community leaders need to provide even greater opportunities for locals to come together, such as by adding recreation centers and community gardens.[1]

Additionally, schools should emphasize the importance of friendship and connectedness, she said, and doctors should include social connectedness in medical screening.

So many people boast hundreds of Facebook “friends” but can barely count on two hands how many true friends they have in real life (if they can tell the difference at all).

If you feel that you’ve become socially isolated, why not try volunteering? It’s a great way to do good, feel better about yourself, and meet new people, i.e., potential friends.

Isolation increases your risk of premature death, but volunteering has been shown to lower the risk.