Terran note: I have no open source documentation to prove the troop movements GW mentions but he’s often been correct in the past.  [as usual my comments and clarifications are in red italic square brackets.] GW and I often use different descriptions to describe the same phenomenon.  All perceptions are valid and none are the same.   That is the power of the many in the unity of one.

Denice: Had a strange night!

Denice: I was in ‘service’. Serving military boys in camouflage flak jackets and helmets a “six-course” ‘Solfeggio’ snack.

Denice: First course was on a white round platter, small cocktail sized sausages.

Denice: Second course was a crisp corn tortilla rolled up.

Denice: Third course was the sausage and the tortilla together, still bite sized. All were on white round platters.

Denice: We were outside, it was very dark… nearly black. I could only see the soldiers come up to take a snack, and my forearm and white platter… t was sooooo dark.

Denice: Then I saw one of the soldiers wrapped tightly by a boa constrictor. It was during a flash of light, like a scene change. 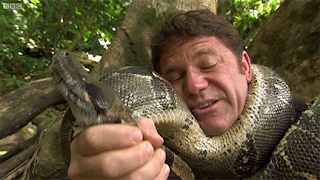 Denice: I never got to serve the last 3 snacks… so I don’t know what they were. I kept getting “G.W. Hardin”… felt like he was instructing me?

An important dream. The courses are symbols of spiritual nourishment, mostly because they’re being served by Denice. The deep dark night symbolizes December 21, the night of this Sacred Solstice, hosted by the Full Moon, which is the New Dawn, even though the dream didn’t speak specifically of this symbol. That’s because the sacred nourishment symbolizes the New Dawn coming through each of us (nourishment).

The soldiers in this dream symbolize the ending of war as a weapon of control over humanity. For instance, Trump has called all aircraft carrier fleets back to home ports. The last aircraft carrier was called by yesterday from the Middle East.

As you know the solfeggio system represents the angelic patterns of Oneness based on the core numbers of 3, 6, and 9.

Though it appears we are at our darkest hour in the days to come, the truth is that we are actually heading to our New Dawn because of all that happened on the night of the Sacred Solstice.

The sausage is a symbol of the Masculine.

The tortilla a symbol of the Feminine.

The two together the symbol of the Divine Marriage of the Masculine and Feminine … the end of the dominance of duality.

The white round platter the symbol of the wedding feast of Oneness.

The boa symbolizes the remnants of evil that will try to hold on as this all occurs, but the “flash of light” will remove even that. The flash of light symbolizes the changes that will come through our sun, which will take down artificial intelligence (AI), and with it the last remnants of evil that have controlled our planet (AI no-consciousness).

The reason Denice keeps getting my name is that this last Summer Solstice, the angels asked me to give the keynote address at the Dallas Grand Gathering Conference.

Unbeknownst to me, was a Grand Formation [sacred geometry] that would include a ceremony set up by them that they called the Divine Marriage of the Divine Masculine (Metatron) and Divine Feminine (Shekinah) of the Angelic Realms. At the last minute I was asked to serve as the “justice of the peace” for this Wedding.

When I pronounced the wedding ceremony, I saw the coming together of the Metatron and the Shekinah into a single being. That being then became one with me, which really shook me. It then became One with all who were in attendance. I call this being the Holy Wholly-One (HWO). I couldn’t even drive back from the conference. A friend had to drive the car the whole way back. The HWO keep with me the entire drive.

I organized a global unity event last night, with home base here in Denver. We had people from around the globe join in for this HOLY NIGHT, HOLY LIGHT ceremony. There were about 80 people last night at the Denver event. When we went into meditation carrying the intent of Unity throughout our world, guess who showed up? Yep. HWO. And almost everyone felt it. I have never in my life felt that high of an energy/vibration at an event. The HWO then spread its presence throughout the network of cities who had joined in the event. It was incredible.

So please let Denice know that she will continue with the last three snacks in the coming weeks. Get ready for the end of war as we know it. Few know that Trump is secretly part of a movement that will be the end of Illuminati funded and forced conflicts. The Illuminati itself is collapsing as we speak. From the termination of the war-based economic system of control will soon emerge a new economic system. My guess is that you will see some form of economic collapse shortly. Some say as soon as the Christmas-New Year break. It’s no accident that the government is shut down.

Lastly, I’ve been approached by philanthropists who are interested in funding a new type of spiritual empowerment movement. They’ve asked me to put together a prospectus for this system, which I will attempt to do next month. This system will based on Lynne McTaggart’s work with THE POWER OF 8, her latest book. I have taken her discoveries to another level and have started a network of groups around the country dedicated to the Power of 8, which I call “The Power of 8 & Beyond.” I’ve created two videos so far on the notion. They are on Vimeo and YouTube. Denice is right. It’s partytime.

Get ready to party,
GW

Should have named it “ WHOLLY HOLY ONE” then we could have said “WHO’s” on first like Abbott and Costello!  ?

Sent from my iPhone