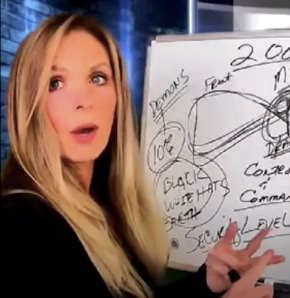 UPDATE 2: 3/9/2021 Inclusion of video that details who appointed Kim Goguen.  A question that I have had for months!  Thanks to a reader for finding this video.  See bottom of article.

Terran to Denice: Can you ask Thor or Stan if any of the above is true?  [see notes below]

Thor: TERRAN. YES. SOME. RECALL THE “DOCUMENTS” OF “ORIJIONAL” (sic) JURISDICTION?  THE PIPELINE WAS RECONFIGURED TO “KIM” FOR NOW BY THE ELDERS. THE “MACHINE” THAT HAS HOS IS SELF-CONFLAGURATING.  THE INTENTION OF THE ELDER TO “BUY MORE TIME” IS FLAWED. WITHOUT SOURCE CODE.  THAT CODE IS IN HOS.  ALL IS PERFECT. THOR.

Terran note: Essentially a stall tactic by the Chinese Elders, “has HOS” refers to the imprisonment of HATJ, who is essentially a political prisoner.

Denice: Intentional. I am looking for H’s docs to see if she had a typo. Or did the elders mirror the doc with a different spelling. In any case none of it will work. H has the keys. Lol!!!!!

Terran: That answers a lot about Kim and why she knows so much about high level banking!

Terran to Denice: I googled Orijion and am finding curious hits like it’s a clue to something hidden in plain sight…

Terran: Is Putin dead? Is Bill Clinton dead? And what is “priestess of the Word”?

Thor: TERRAN. PUTIN IS NO LONGER IN EARTHFORM. CLINTON WAS REMOVED PREVIOUSLY. THE SUBSTITUTE FORM WAS/IS DAMAGED BEYOND REPAIR.  “PRIESTESS OF THE WORLD” IS A “SELF-FULFILLING”PROPHECY. NO PUN INTENDED. THOR.

Terran: Thor what became of the original Biden? This being who ran for President is not physically the same.

Thor: TERRAN. IT IS A BADLY DAMAGED “FIX” TO THE ORIGINAL FORM. SAME ESSENCE/DNA.  THOR.

Thor: TERRAN. AS ALL FLOWS NOW RECALL THE PROBABILITIES AND POSSIBILITIES NARROW IN SCOPE. THESE ARE “CONFUSED” WITH TIMELINES SHIFTING/MERGING. ALL IS MERGED. YET NOT VISIBLE TO ALL. THESE EXPERIENCES NOW EXPAND THE SCOPE OF VISIBILITY. FREQUENCIES ARE RIPE FOR CREATION NOW. EACH THOUGHT. EACH WORD CARRIES GREAT IMPACT IN VIBRATION. THE TRAINING WHEELS ARE OFF. RIDE THOUGHTFULLY AND IN JOY. THOR.

In a prior conversation with a friend…

Friend: Kim, in her latest non-public video says that Putin is dead. As well as Bill Clinton. Heard Putin was having serious health problems.

Terran: What’s the url for that video?

Friend: Kim didn’t make the video public. No URL. I got notes from one of her members while watching the video.

The following notes about Kim’s video to the Speak Project members were passed on to me….

Terran: He does not answer to Kim!

Freind: [Simon] Parkes seems to agree with you

Terran: What bothers me is the unclear origin of purported authority

This video, from one of the members of Kim’s Speak Project, gives details as to who gave Kim Goguen her purported position.  And its none other than…. DRUM ROLL…  MARDUK!   How would you like “Marduk’s choice!” on your CV/Resume?