A recent study reveals matcha green tea to be a powerful cancer fighter, killing cancerous cells by preventing them from refueling.

Matcha green tea is tea in powder form. It is made from the leaves of green tea, which are covered in fabrics to give them a better taste and texture. The leaves are then hand-picked, steamed, and dried and left to ripen in a cold environment that boosts its rather bitter flavor before they are crushed into a powder.

Unlike other types of tea, matcha tea contains whole leaves that are rich in nutrients and antioxidants that protect against heart disease and several types of cancer, including colon, breast, ovarian, prostate, and lung.

For the study, researchers from the University of Salford assessed the effects of a matcha extract on breast cancer stem cells, which have the ability to transform into any type of tumor cell, replicate, and renew themselves. [2]

Through the use of metabolic phenotyping, a scientific process that examines how compounds directly affect cells, Professor Michael Lisanti and his colleagues found matcha tea extract suppresses the metabolism of mitochondria, which powers cells.

According to Lisanti, the extract stopped the cancer cells from refueling by putting them into a “quiescent metabolic state.”

“In other words, it [matcha] is preventing the cells from ‘refueling’ and therefore they [cancer cells] become inactive and die.”

The researchers found that matcha “strongly affected” the mTOR signaling pathway known to play a critical role in the metabolism of cancer cells.

Furthermore, the extract weakened components of a ribosome needed to synthesize most of the proteins that are vital to cells’ survival.

Matcha green tea could one day be used as a natural alternative to the drug rapamycin, which switches off the mTOR pathway.

The findings are promising, but the experiments were conducted in the lab, so more research is needed to find out if matcha has the same effect on cancer cells in people.

“Although this early study shows that matcha green tea can kill breast cancer cells grown in the lab, this is very different to drinking the tea. Other early-stage research suggests that extracts from green tea could stop cancer cells from growing. But at the moment, the evidence is not strong enough to know this for sure and we need verification from human studies to prove this.”

The study was published in the journal Aging. 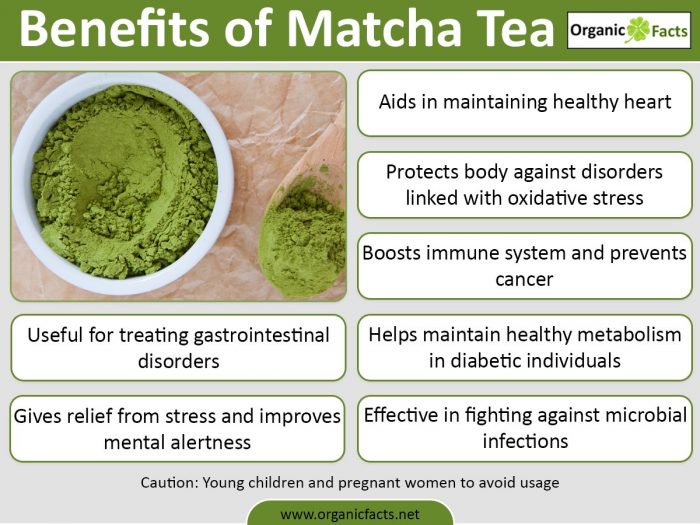