A coalition of experts and politicians in the United Kingdom are warning that the meat industry will gain the murderous reputation of the tobacco industry if it doesn’t stop adding cancer-causing nitrites to meats like bacon and ham.

According to food scientist Professor Chris Elliott, and cardiologist Dr. Aseem Malhotra, the coalition has reached a “consensus of scientific opinion” that nitrites, used to cure meat, produce carcinogens called nitrosamines when ingested.

Nitrites are the chemicals that give processed meats their pink color.

The coalition further claims that nitrites in meat cause 6,600 cases of bowel cancer in the UK each year – 4 times the number of deaths caused by vehicle accidents, They are campaigning for the government to give the chemicals the same health priority as sugar.

“Government action to remove nitrites from processed meats should not be far away. Nor can a day of reckoning for those who dispute the incontrovertible facts. The meat industry must act fast, act now – or be condemned to a similar reputational blow to that dealt to tobacco.”

In 2015, the International Agency for Research on Cancer (IARC) classified processed meat as “probably carcinogenic,” linking the foods to colorectal, esophageal, lung, and pancreatic cancer. The agency, part of the World Health Organization (WHO), placed the blame on nitrites and nitrosamines. 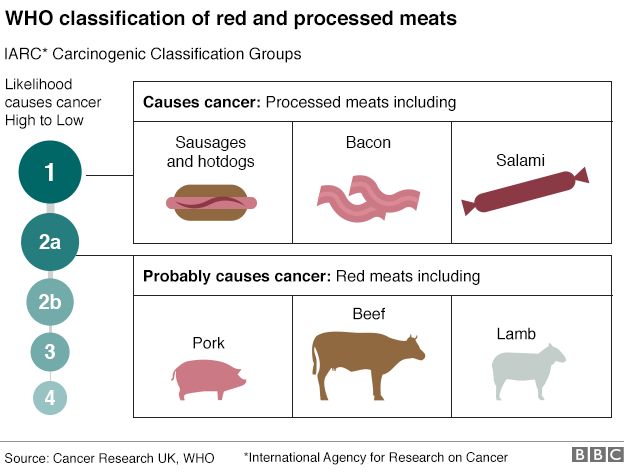 In October 2018, processed meat was linked to breast cancer when a Harvard analysis of more than 1.5 million women showed that regularly consuming processed meat increased the risk of the disease by 9%.

In a December 29, 2018 statement, the coalition said “that not enough is being done to raise awareness of nitrites in our processed meat and their health risks, in stark contrast to warnings regularly issued regarding sugar and fattening foods.”

The meat industry argues that nitrites are essential for fighting botulism and infection, but Malhotra pointed out that Parma ham (Italian dried ham) hasn’t contained nitrites in 25 years. In fact, many meat producers have stopped using nitrites in their products, which proves that the chemicals are indeed unnecessary.

The European Food Safety Authority maintains that exposure to nitrites as food additives are within safe levels for all population groups, except for a “slight exceedance” in children who consume a diet containing high levels of the preservatives. [2]

A spokesperson for the British Meat Processors Association (BMPA) said:

“The industry is constantly looking at the levels of nitrites and nitrates, but reductions have to be balanced against the food safety issues and minimizing waste.”

Those levels would rake in an estimated $172 billion per year globally and cover 70% of the healthcare costs associated with consuming red and processed meats. The tax would need to be doubled in order to cover the full costs.

The World Health Organization (WHO) has also linked red and processed meat to coronary heart disease, stroke, and Type 2 diabetes. [1]

The authors of the study estimate that in 2020, the consumption of red and processed meat will result in 2.4 million global deaths and a healthcare bill of $285 billion.

In addition to off-setting healthcare costs, the authors said their proposed tax could lead to a 16% decline in the global consumption of meat. This, they say, could be a big boon to the environment, as it would reduce global greenhouse gas emissions by over 100 million tons.

Earlier in 2018, an analysis showed that avoiding meat and dairy is the biggest way people can reduce their environmental impact on the planet. The study found, among other things, that if people stopped eating meat and dairy, it could reduce global farmland use by 75% – an area equivalent to the U.S., China, European Union, and Australia combined. [3] 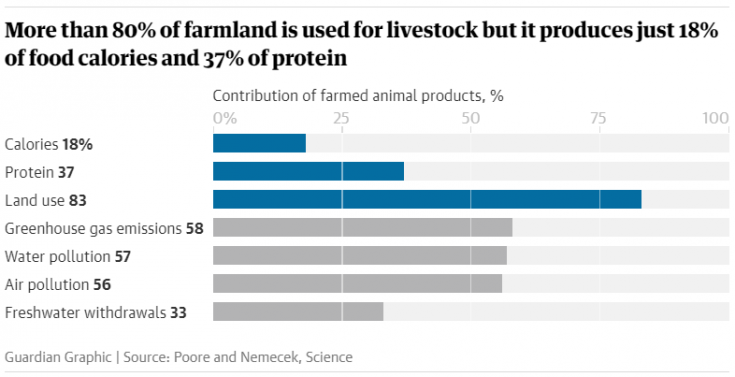 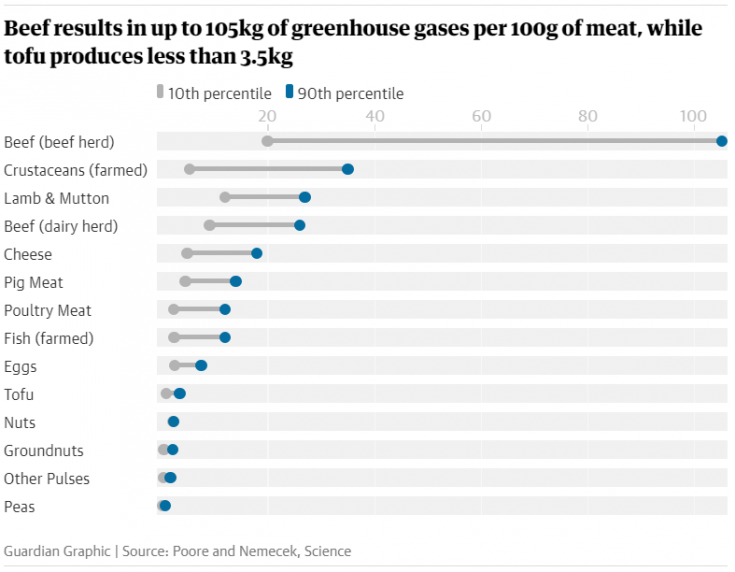 Read: Do You Agree With Soda Taxes? Sugar Consumption Down in Berkeley Due to the Measure

Study leader Marco Springmann said an overconsumption of red and processed meat had a negative impact on many countries. [1]

“I hope that governments will consider introducing a healthy levy on red and processed meat as part of a range of measure to make healthy and sustainable decision-making easier for consumers.

Nobody wants governments to tell people what they can and can’t eat. However, our findings make it clear that the consumption of red and processed meat has a cost, not just to people’s health and to the planet, but also to the healthcare systems and the economy.”

Springmann and his colleagues compared the proposed tax to those already levied on other health-damaging products such as tobacco, alcohol, and sugar. However, with different laws in different jurisdictions, it could be challenging to implement a global meat tax.

The researchers estimate that a global meat tax would save 220,000 lives, including 53,000 in the United States. Moreover, the tax would result in $41 billion in healthcare savings, including $20 billion in the U.S. [4]

“Consuming red and processed meat not only affects your health but also the economy at large.”

He cited decreased productivity and care for family members who suffer from chronic disease.

The study is published in the journal PLOS One.

[2] International Agency for Research on Cancer

Researchers in California and France want to remind us that not all protein is created equal (at least when considering the nutrition of the entire protein-filled food). They say that meat protein is associated with a significantly increased risk of heart disease, while proteins from nuts and seeds are heart-healthy. [1]

Published in the International Journal of Epidemiology, the study found that people who eat large quantities of meat protein had a 60% risk increase in cardiovascular disease (CVD). By comparison, people who consumed large amounts of protein from nuts and seeds experienced a 40% reduction in CVD risk.

“While dietary fats are part of the story in affecting risk of cardiovascular disease, proteins may have important and largely overlooked independent effects on risk.”

Fraser said that he and his colleagues have long suspected that red meat increases the risk of CVD, while adding more nuts and seeds to your diet protects against it. [2]

The researcher hopes that the findings will lead to further research into the way certain amino acids found in animal proteins boost the risk of heart disease, as well as more research into the relevance of blood pressure, blood lipids, and weight.

“It is apparent that there is a wide variation in the nutritional quality of plant foods, making it crucial to take into consideration the quality of foods in a plant-based diet.”

On July 28, 2018, a bill went into effect in Missouri that prohibits companies from “misrepresenting a product as meat that is not derived from harvested production livestock or poultry.” [1]

The bill, introduced in May, protects buyers from unwittingly purchasing plant-based products marketed as meat. The law applies to meat substitutes, such as soy-based and plant-based meat, as well as “clean” meat grown in the lab that is close to hitting the market.

Companies that violate the law face a $1,000 fine and up to a year in prison.

The issue, however, is far from over.

Four organizations – Tofurky, the Good Food Institute, the American Civil Liberties Union of Missouri (ACLUM), and the Animal Legal Defense Fund – have already sued the state, seeking an injunction to block the law from being enforced. Both sides claim they’re trying to do what is best for buyers who want to know the precise ingredients that go into their meat. [2]

Namely, is it really meat?

The groups accuse the state of stifling competition from producers in the plant-based protein industry.

“As more and more consumers are making the conscious choice to remove animals from their plates, Missouri is putting its thumb on the scale to unfairly benefit the meat industry and silence alternative producers. This law violates various constitutional principles, including free speech – which should be a concern for everyone, regardless of diet.”

In a statement, the office of Missouri’s attorney general said that “it would seek to defend the constitutionality of state statutes.” [2]

Products like veggie burgers are nothing new, but the products’ growing popularity has triggered a fierce debate over how they should be identified. [1]

The law has technically gone into effect, and the state is ready to enforce it, a spokeswoman for Attorney General Josh Hawley’s office said.

“The attorney general’s office will carefully review all referrals from the Department of Agriculture and will take legal action as appropriate under the circumstances to protect Missouri consumers.” (Andrea Germanos) A new analysis offers alarming findings as many Americans get ready to fire up their grills for the 4th of July—nearly 80 percent of supermarket meat was found to have antibiotic-resistant bacteria, also known as superbugs.

The post Superbugs Found In Nearly 80 Percent Of U.S. Supermarket Meat appeared on Stillness in the Storm.