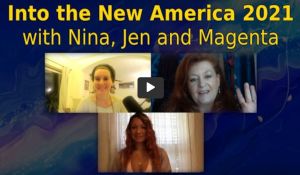 I viewed / listened to this (on both sides of a wonderful “snow walk”), and found much information, as well as possible timelines “playing out”, as well as how each of us may have a role in manifesting a Higher Vibrational “New America”, “New Earth”, via our collective thought. If one wishes to listen to a shorter section, I’d suggest the last 20 minutes.

This was (eventually) found on Rumble, via Jen McCarty’s Rumble page, via Magenta Pixie’s YouTube video.

We cover so many topics in this video from the new social media platforms to America being the capital of the new Earth to DJ T being king of the new Earth and what it means to be a global patriot one of the best videos I’ve ever taken part in.

As I’ve mentioned before, if watching on computer, iPhone or Android devices, I usually speed up the video and listen at 1.5-2.0 speed… as a “time saving” convenience (click the gear at bottom right, and click “Playback Speed”).