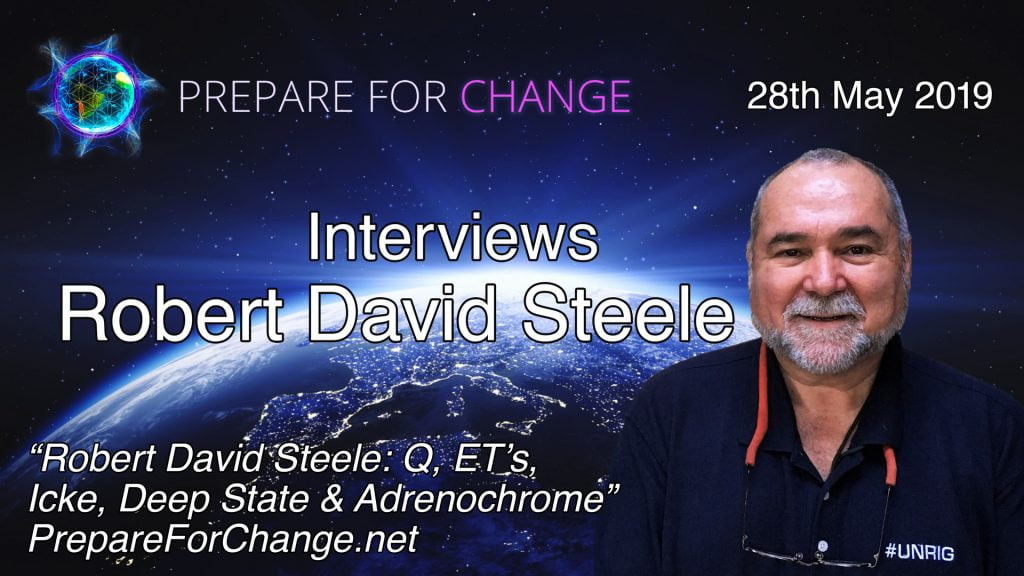 Prepare for Change speaks to Robert David Steele on May 28th in a long and winding interview that sees Robert passionately presenting his take on subjects from Q, Deep State and Adrenochrome to his recent review of David Icke’s book Everything You Need to Know But Where Never Been Told. The conversation leads to thoughts on spirituality, ETs, Reptilians, the Pope and more controversial topics that are coming up in our emerging times. He also gives an opinion on what may have happened regarding earth around 2012.

An eye-opening interview and plenty of passionately provided information from one of the USA’s most “in-the-know” insiders, followers of RDS will hear something new in this entertaining interview.

Prepare for Change is presenting a new format for the first time – a video interview. So, see Robert’s real impact on screen.

Robert served with the United States Marine Corps for 20 years in both the infantry and civil service capacities, as an intelligence agent and trainer. He is an author, writer and book reviewer who has written eight books on intelligence and electoral reform and has published over 2,500 reviews of non-fiction writings.

Along with intelligence reform, he champions election reform through his #UNRIG Election Reform website, which he originally set up with 6 term Georgia House of Representative Cynthia McKinney.

He has created a 501c3 organization called Earth Intelligence Network that seeks to promote and teach holistic analytics and open source everything engineering. He also has a public intelligence blog called PhiBetaIota.net. His passion for exposing the human trafficking and paedophilia infection in our political and religious systems has empowered him to be a Chief Counsel for the treaty-mandated International Tribunal for Natural Justice. Most importantly he is an outspoken critic of The Deep State and all of its’ dark and controlling programs.

We are an all-volunteer organization. We do set aside a little money to support our website, but nearly all of your donations to PrepareForChange.net support over 500 children in an orphanage we funded in Malawi, Africa.

Think about donating to these children and those in need. Or simply to keep our platform running and bringing you the latest information. You can donate here.