Hopefully, before you head to the beach, you’ve already looked for some safe sunscreens for your body. But if you’re not reading labels, and if you don’t understand what the ingredients on those labels are, studies show the product you’re lathering on your skin could actually pose a grave threat to the ocean environment. These sunscreens are especially not safe for coral reefs.

The world’s most popular reefs are at risk because of a common chemical found in all types of sunscreen: Oxybenzone. [1]

Oxybenzon – Why Sunscreen is NOT Safe for Coral Reefs, Aquatic Life

According to a study published in 2015, oxybenzone poisons coral by contributing to bleaching, has a similar effect on DNA to gasoline, and causes young corals to become fatally deformed because the chemical disrupts reproduction and growth.

Craig Downs, one of the study’s authors, explained:

“It causes weird deformities in soft tissue and also causes the coral larvae to encase itself in its own skeleton, in its own coffin.”

A dose of oxybenzone the size of a drop in 6.5 Olympic swimming pools is enough to damage coral reefs.

“Oxybenzone can cause an adverse effect in coral at 62 parts per trillion, that is equivalent to one drop of water in six and a half Olympic size swimming pools, so you don’t need a lot to cause a lot of damage.” [2]

In fact, scientists have discovered that many beaches popular with tourists have dead and sterile reefs, compared to beaches with little human traffic, which are healthy. [1]

It is believed that up to 14,000 tons of sunscreen is deposited on coral reefs each year. [2]

Hawaii is contemplating banning oxybenzone-containing sunscreens on the islands for this reason. Sunscreen isn’t safe for coral reefs!

Other sea life is imperiled by oxybenzone, as well. Downs’ team found the chemical has toxic effects on fish larvae and embryos. [1]

How to Ensure You’re Buying Sunscreen Safe for Coral Reefs

Some sunscreen manufacturers have started producing and marketing sunscreens as “reef friendly,” but there’s no way to know for sure what you’re getting. Scientists warn that, like the “natural” and “healthy” labels on food, there is little to no regulation over such claims.

So here are a few tips for picking a sunscreen that is, indeed, reef-friendly. 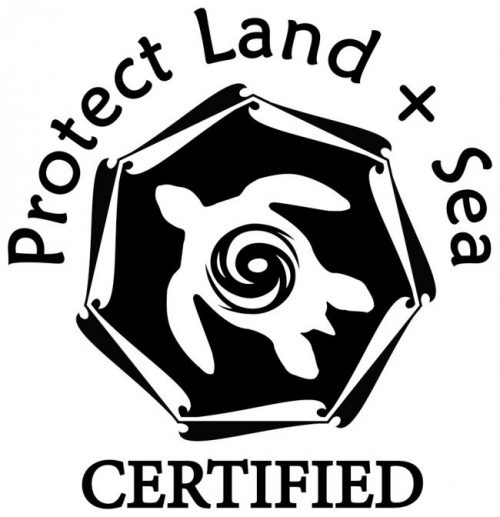 Look for sunscreens containing the “Protect Land + Sea” Certification Seal. This means the product has been laboratory-tested using analytical-forensic techniques to verify that it is free of the following chemicals:

While sunscreens containing ONLY zinc oxide and titanium dioxide are considered reef-friendly, when these ingredients are uncoated and nano-size (less than 35 nanometers in diameter), they can enter the cells of invertebrates and cause oxidative stress in sunlight. Downs explains that “This blows up the cells so they die.” [4] [5]

Buy Sunscreens with the Simplest Formulas

According to Downs, even oils added to sunscreens, such as eucalyptus and lavender, can harm invertebrates. Industrial insecticides can contaminate beeswax, that, when emulsified in beauty products, can release these chemicals on your skin and in the water. This is why it’s so important to buy organic sunscreen. 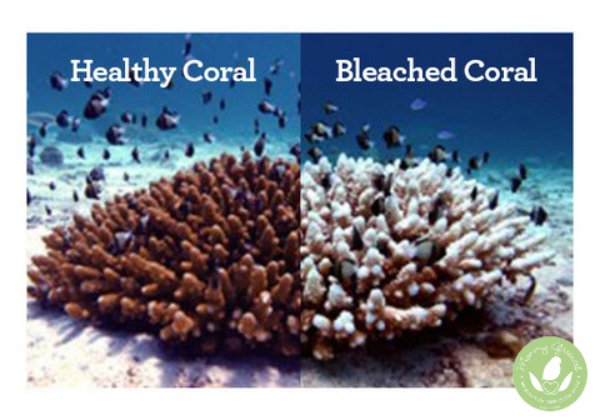 Aerosol sunscreens are worse for reefs than other types because it travels and leaves residue in the sand. Waves wash the sand and the residual ocean spray into the oceans. [2]

When researchers sprayed a small piece of coral from Trunk Bay in the U.S. Virgin Islands with one of the top aerosol brands, the coral lost all its algae, and turned white and bleached within 96 hours.

John Burns, PhD and coral biologist, who has worked on coral health and disease for nearly a decade, said:

“They actually have a basic immune system that is a lot like humans, they react when they are being stressed out. When they’re white, their stressed, it’s a lot like us, when we’re sick, we’re pale and we’re not as healthy, and that’s what’s happening to the coral.”

Now that we know that most sunscreens aren’t safe for coral reefs or ourselves, let’s make it a goal to explore other, safer options for protection this summer.