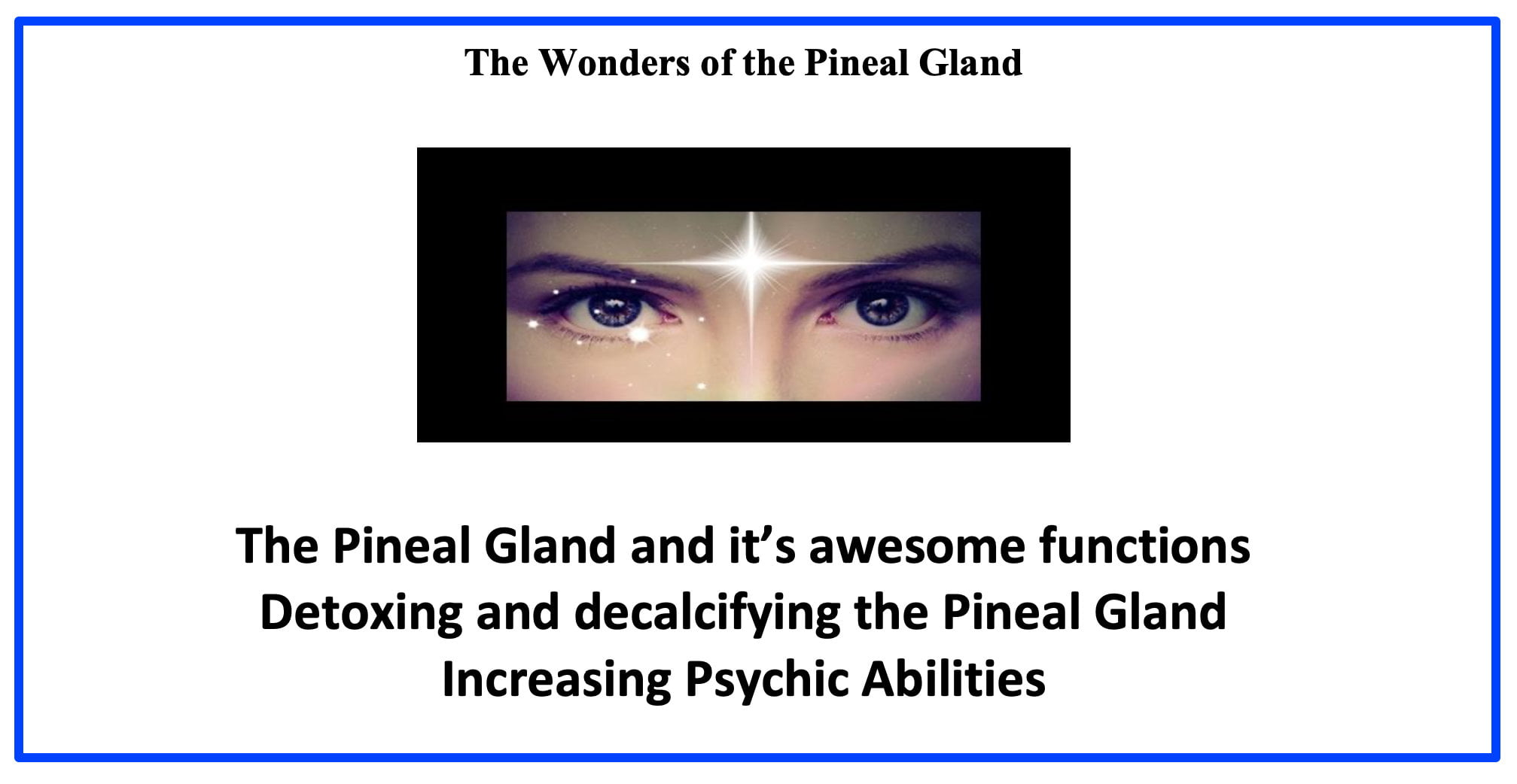 A three-part study
By Reverend Kathleen Carroll AKA, Super Sleuth

The Wonders of the Pineal Gland

The pineal gland is the pine cone shaped gland in the center of your brain. It’s been noted to look very much like the eye of Ra as shown in this photo. This is also known as your third eye and Epiphysis Cerebri. All animals with a spine have this gland and it has a lens, cornea and retina just like your eyes! I happen to love language and the etymology of words. Isn’t it interesting that Epiphysis is so close to the word Epiphany? (A moment of sudden revelation or insight).

An interesting fact about the pineal is there are Calcite Micro Crystals made of calcium, carbon and oxygen. They produce a bioluminescence, a cold light ranging in the blue-green light spectrum. The calcite micro-crystals have their own Piezoelectric effect that responds to electromagnetic energies outside the physical body and can produce its own electromagnetic energy. The word Piezoelectric came from the Greek word Piezo for stress, squeeze or push. So what pressure or push causes the effect in the Pineal Gland from the inside? Meditation!

Crystal are used in electromechanical applications and can be programmed. If we have crystals in our Pineal Gland that perform a similar action, imagine what we could do with our minds if we learn to harness the effect! Meditation and/or prayer seem to be the answer and will be discussed in part III.

The pineal gland is important to mood and the quality and duration of your sleep through the production of the neurotransmitter serotonin by day which is converted to melatonin at night. Darkness is required for this to occur. Dietrich Klinghardt MD PhD believes that many individuals with sleep disorders have melatonin deficiency because the pineal gland is not getting enough full-spectrum sunlight during the day, or enough darkness during the evening.

The pineal regulates our daily and seasonal circadian rhythm, the sleep-wake patterns that determine your hormone levels, stress levels, and physical performance. In conjunction with the adrenal glands, the pineal gland effects skin pigmentation, helps regulate potassium and sodium levels in the body, controls one’s mental stability, and mental and sexual growth. The famous philosopher Descartes described the pineal gland as the “principal seat of the soul” and through it, we have mystical and religious experiences. If you think you need to ingest DMT to have these mystical experiences, think again. It is produced naturally in the body as part of the synthesis of Serotonin and melatonin. How it’s accessed is worthy of another article!

Intuition is one of the psychic abilities of the third eye. It was no doubt an important survival tool from man’s early days to warn us of impending danger or help locate food sources and navigate unknown terrain.

It’s that little voice in your head “did I shut the garage door after I left the house? Maybe you’ve used it to buy winning lotto tickets. Many people have experienced flashes of intuition that made them take a different route to work only to find out later that they missed a terrible accident. Mothers have an innate ability to catch kids doing something they shouldn’t and are said to have eyes in the back of their head but it’s their 3rd eye in the middle of their heads!

The pineal gland is what….

Stay tuned for
PART TWO
Pineal Gland Calcification and it’s Causes
Sick and Tired of Being Sick and Tired
which will be posted in a few days.

Aluminum, Fluoride, Glyphosate and EMF: The Deliberate Concoction to Shut Down Your Body

Fluoride is added to 70% of America’s drinking water, in what has long been a controversial practice of involuntary mass-medication. One organ that is particularly susceptible to fluoride build-up is the pineal gland.