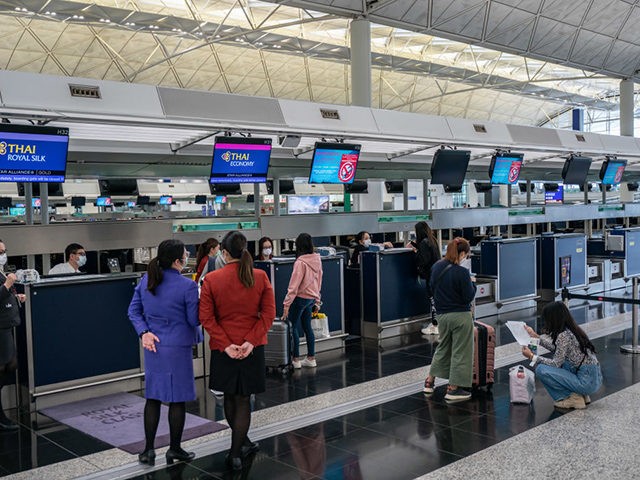 Terran note: Heglian Dialectic at its rawest.  Create the virus pandemic to install the surveillance…

Chinese Communist Party “experts” urged the World Health Organization (W.H.O.) on Tuesday to let China build and run a global database for “vaccine passports” documenting if every person on earth has received a Chinese coronavirus vaccine.

The Communist Party launched its domestic “vaccine passport” system Wednesday, despite W.H.O. officials urging countries not to implement such a system due to unequal access to vaccines and the variety in the quality of the available offerings around the world. The “vaccine passport” — A digital certification that confirms a person has received a coronavirus vaccination — joins China’s larger “social credit system,” which judges every citizen and awards them numerical “scores” based on how much the Party approves of their behavior. The behavior judged can vary from littering and volunteering, which result in respectively lower or higher social credit scores, to the display of public opinions either in favor or against the Communist Party.

China’s social credit system has prevented millions of citizens from traveling through banning them from purchasing airplane, train, or public transportation tickets. China is similarly limiting citizens who do not receive a vaccine against the Chinese coronavirus from widespread travel.

China’s Global Times, a state-run propaganda newspaper, proposed Tuesday that the Communist Party could build an international “vaccine passport” surveillance system in a week through its large technology companies. The proposal appeared to be a response to the W.H.O. explicitly discouraging countries from creating such a system.

“Chinese experts noted on Tuesday that China can help by sharing its experience with and provide technical support to the WHO to organize the issue,” the Times reported, “as China is the most experienced country in using a health code system in the world while the WHO is the most proper organizer for the matter to ensure independence, fairness and data security.”

The regime-approved “experts” cited in the article argued that, since China has been conducting mass surveillance of its citizens, violating their human rights, for years, expanding that system to the rest of the world would not present a major technological challenge.

“In terms of technology, I believe that Chinese companies can build an international platform in just one week,” one of those experts, the head of a Chinese organization identified as the “Information Consumption Alliance,” claimed. “The WHO can draft the rules, procedures and data format. China is very willing to provide support in sharing experience and techniques in setting up such a platform as the country has rich experience in this.”

The Global Times did not express significant confidence in the possibility of the W.H.O. agreeing to such a deal, though the U.N. health body has stood accused repeatedly throughout the pandemic of allowing China to dictate how it responds to the virus, including spreading disinformation claiming the highly contagious virus was not transmissible from person to person. Instead, the newspaper cited other Chinese government observers who suggested that, rather than wait for the W.H.O., China should pressure other countries into bilateral vaccine passport agreements. The agreements would hypothetically lift travel restrictions between China and the agreeing country for individuals who can show documentation proving they have received a coronavirus vaccination.

Chinese officials are reportedly attempting to convince the administration of President Joe Biden to recognize China’s homemade vaccines as effective to implement such a plan, in exchange for China recognizing American-made vaccines.

The Communist Party hopes to convince countries that, unlike the United States, have approved the use of Chinese-made vaccines to lift travel restrictions on vaccinated Chinese citizens, the Global Times noted Tuesday.

“Chinese experts said it is very possible and practical for China to start mutual recognition with countries that had approved Chinese vaccines, such as Malaysia, Singapore and Indonesia;” the publication reported, “or some neighboring countries that have practical needs for resuming exchanges, such as South Korea and Japan; or regional organizations such as the Association of Southeast Asian Nations; or any other country that is willing to cooperate.”

The growing global push out of Beijing for “vaccine passport” programs met with stern rejection from the World Health Organization on Monday. Dr. Michael Ryan, director of the W.H.O. Health Emergencies Program, warned that “real practical and ethical considerations” abound regarding the programs and urged countries not to consider them at the moment.

“Vaccination is just not available enough around the world and is not available certainly on an equitable basis,” Ryan contended, which would lead to “inequity and unfairness … further branded into the system.”China’s “vaccine passport” program launched this week operates through WeChat, a Chinese government-controlled social medium that the regime heavily censors and uses to monitor its citizens. Individuals vaccinated will have QR codes available on WeChat that allow other nations to confirm their vaccination status. At press time, no other nation has agreed to access the certification, though Chinese officials will likely use the program to limit domestic travel.

“We hope more countries will join this mechanism. We need to further standardize policies and establish fast tracks to facilitate the orderly flow of people,” Xi told fellow world leaders.

China already heavily restricts travel through the “social credit” system. The state brands individuals with low social credit “untrustworthy” and bans them from buying tickets to travel, even within the country, if their score is too low. As of March 2019, Chinese state media boasted that over 13 million people no longer had the right to travel within China thanks to that system.

“As of March, 13.49 million individuals have been classified as untrustworthy and rejected access to 20.47 million plane tickets and 5.71 million high-speed train tickets for being dishonest,” the Global Times reported in May of that year, without elaborating on the offending “dishonesty.”

Human rights activists around the world have warned that China uses the social credit system to limit the rights of political dissidents, religious groups, and others considered a threat to communism, rather than just individuals with records of crime.