(Aletheia Luna) Your body is a map and storage house of every experience you have ever had.

The post 9 Types of Muscle Tension Caused by Trapped Emotions appeared on Stillness in the Storm. 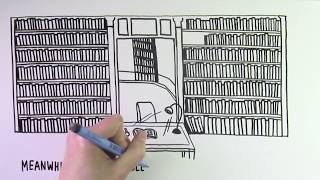 (Josh Jones) If there’s one thing The Da Vinci Code’s Dan Brown and “The Library of Babel”’s Jorge Luis Borges have in common it is a love for obscure religious and occult books and artifacts. But why do I compare Borges—one of the most highly-regarded, but difficult, of Latin American poets and writers—to a famous American writer of entertaining paperback thrillers? One reason only: despite the vast differences in their styles and registers, Borges would be deeply moved by Brown’s recent act of philanthropy, a donation of €300,000 to Amsterdam’s Ritman Library, also known as the Bibliotheca Philosophica Hermetica House of Living Books.
Read more »