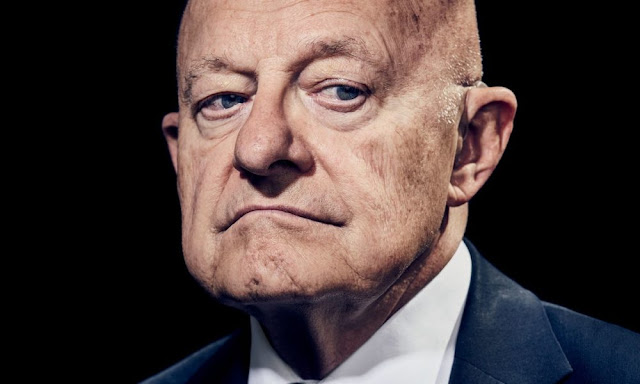 Update 1: fixed some data in the transcript. Thanks to a reader!

This was posted originally on Simon Parke’s blog https://www.simonparkes.org/post/james-clapper-interrogation you can listen to there. The audio is not great, so I cleaned it up a bit which you can download here: https://mega.nz/file/BvB3FApJ#fGtlq9Hh7hjrZkorEbMEbesmCWbXGI0Ly6gfAKsbHsg in MP4A lossless format.

I created a transcript to the best of my ability, took a while given how fast he speaks.  Let me know if there’s any typos or omissions and I’ll fix it.

The text is rich in data, which is easy to miss in the audio.   James Clapper is not known for being truthful but he may be under oath in this, the circumstances of this interview is not known and how this got leaked is not known.  I am assuming the interviewer is  a military person, but I could be wrong on that. It’s only a partial interview (8 minutes)… perhaps more comes later?

I also got the feeling at the end he’s trying to put the blame on a technical guy which is a common tactic of those in executive type positions, down playing their own abilities and expertise and responsibility.   “It was the computer nerd in the corner!”  Mind you we don’t have the full interview yet so we don’t know where this interview is going…

I was told in 2013, by a banker curious in Heather’s work, that every Intel motherboard since the centurino chipset has a 3G cell antenna builtin into the motherboard.  So every computer, even if air gapped, can be compromised, even if you have double or triple firewalls on the internet.  WIFI made it worse, because the encryption is not all that robust in WIFI.  Passwords are regularly broken.

There’s nothing in here I didn’t know before, in general, but this gets into the specifics of some of the ones involved in corrupting Title III Judges (Federal District Court Judges) and their families.  I saw first hand the bizarre Judge behavior in DC and Knoxville in the HATJ/RKB case.   DC was really strange.  In Knoxville there were flat out lies from the FBI on the record in a court of law under oath. Heather was arrested in DC by Peter Strzok’s crew.  The trial destroyed all trust I have in there being any justice in the Federal Court system.  I used to think the truth would free people. We saw that corruption again with this rigged Presidential election.

James Clapper: [abrupt beginning]…domestic terrorism was in the country, I had access up to then to a certain group headed by Rob Rosenstein. It’s a group known as the “dirty tricks squad” in Baltimore. This was where they were using HAMMER, SUNRISE, SUNSET and things like that to illegally spy on people. Corrupt..uh… well attempt to corrupt Judges, compromise them, um… Hillary Clinton, other abuses ongoing, they concentrated on judges but the wanted to concentrate on us… anyway illegally compromise people, illegally wiretap, break into computers, plant, reverse, change information, change emails. Things of that nature. It was in that capacity in working with them that the information about the judges, Roberts and Pence and things like that had came out.

James Clapper: I tried several times in the past to get it out and was thoroughly squashed by Rod and the DOJ and the FBI. To a horrible extent. I tried again in 2015, tried to end run them and go to the Department of Homeland Security. Anyway I tried to warn President Trump about the people he was dealing with daily, especially Rod and Pence, things like that as they were working together trying to remove him, trying to compromise people around them get their name when they possibly could.

Interviewer: Now how were Rod and Roberts [unintelligible] and Mike Pence connected?

James Clapper: That group, I mean, they are all interconnected in one way or another. That particular group was Rod, VP Pence, Paul Ryan, that was the core of that group. Roberts was in there. But that was the core of it, it was an attempt where Rod was the brilliant legal mind behind it, to remove President Trump on the 25th amendment. But that’s an old movie because they were passed over for promotion. Which they both felt they were. VP Pence hated President Trump because he taken his slot, as rightful President. He felt that he did. And Paul Ryan was also considering running as well for a Vice Presidential slot and Mitt Romney was also involved.

James Clapper: But they just wanted… President Trump was as an outsider… had not paid his dues… they just didn’t like him. So once VP Pence was in there, once President Trump was elected obviously VP Pence… I just walked away and everything became very quiet. I was never on one side, so I would run interference and meet certain things… I just keep tabs on the President, manage him.

Interviewer: So is this a friendly relationship between Mike Pence and Rosenstein? Was there any kind of leverage being placed on the President…er Vice President at the time?

James Clapper: There was leverage on Mike Pence because of surveillance from way back in the 2013 range. They had got FISA warrants to exploit. Rod had that. He wanted the the VP Slot himself, if they could remove the President Trump, Vice President Pence would become President and Rod and felt he was the natural selection for it. Paul Ryan felt differently, as did Mitt Romney. But that was the over all goal, each one vying for the Vice Presidential slot, Rod thought he was the clear winner because of his legal brilliance, and his management of the Mueller investigation and special councils and things. He would be the one to remove the President, damage him so thoroughly he could be removed and he deserved it.

Interviewer: you’re talking what kind of leverage, what existed on the Vice President?

James Clapper: The Vice President has had homosexual relations in the past. Many of them were adults. This is something he had done throughout his time in Congress. When he became governor he felt that he was free to explore that more. There were two that they specifically had recorded, one gentleman roughly 20 years his junior, a fairly steady relationship, there was one about half his age, it was much more sporadic because it was much more dangerous, harder to get time alone. And it was that second one that introduced younger and younger people. This is whomever…he was 17.. whomever he was 15… whomever he was 13…. And Rod and Roberts, Chief Justice Roberts took a lot of younger people involved, the ones that were were brought as favors, were supplied by Jeffrey Epstein’s channels, through his channels, his people. Where we get replacement warrants, one of course because Chief Justice Roberts is head of the FISA court, to help prepare them, but it was also Epstein was an intelligence asset used by Intelligence agencies around the world they used his information and exploited it for their own good. So he was here or his his people were here, it was easy enough to justify a FISA warrant on them. The FBI would enact an order, surveil everything, document it, but they would not help anyone, they would not save the child. They would not reveal… it was more important to have the leverage on everything, this is under their own corrupt ideas under Rod… his tutelage. Look they wanted the leverage.

Interviewer: Alright, I want to ask if we can get into some more of the details with the dirty tricks squad and how Rosenstein was part of the group and if Roberts had any type of interactions there as well?

James Clapper: Dirty Tricks Squad, its just a nick name, it was nothing official, its a group of people even dirtier than what they controlled. I was once controlled. There’s Rod, Sean Henry FBI, Sean Bridges Secret Service, Joseph Rossati DEA, Boris Jacque??? [unintelligible] was ATF, Greg Hutts was TFO with the DEA but he was former Balitmore County police. This was the basis of the dirty tricks squad. The computer experts, you had the muscle, you had the technical experts and that’s what they were doing.

James Clapper: There was another group in Ft Washington, who was running one on top of another, this was a satellite location in Baltimore just for the really illegal stuff, illegal communications, hacking, phone tapping you name it. And…ah…they concentrated, their main focus all the time was Title 3 judges. Federal judges. What they called rivals, sitting politicians, anybody they needed to go after, anybody they were pointed at. Go after family members of judges, then compromise people as much as they possibly could. They had no problem hacking computers and planting information to compromise people. This is something they have done numerous times, Rod has done this for years and years.

James Clapper: So had Sean Bridges where they had finagled a case that they had before the court, where for instance, they arrested a gentleman… and he had money, he had property, he had the resources to fight them. They didn’t like that. So Sean would go in, plant child porn on their computer, and what do you know… examination, “now you got this on there!” “I don’t know anything about that!” “So we are going to charge you!” He…he didn’t want that, it would ruin his life, he didn’t want to prison as a pedophile, you know what happens… and things like that. This gives us leverages in hundreds and hundreds of cases. And then he would plead, as the person who was charged would plead to a lesser charge that wouldn’t show up on the record like he would have to forfeit property and money and things like that, they would skim their percentage off.

James Clapper: Sean Bridges was particular good at it, it was his specialty, maybe he had done this at the state and county level and got in trouble a couple times and why he came under the slate of Rod Rosenstein, got him a Federal job. Sean didn’t like Obama, didn’t like Hillary, he had access to the White House, Air Force One, CIA, NSA. He had those kind of clearances. He was the number one expert on the forensic study of computers for the Secret Service and most of the government.

Interviewer: Was he a government employee? Was he a contractor?

James Clapper: He was a Secret Service Agent …

James Clapper: …so he had access to all these things. But because of his clearances, because of his expertise, he could go anywhere, he was often at the White House, texting the location of President Obama and what there were doing.. He hacked the Obama’s Library just for fun. He shared messages with people. He hacked the girls phones. I was nothing for him. He had a list of people he would call up and watch them do their daily stuff. He’s truly gifted with computers. I’m good with computers I can do [unintelligible] but he’s one of those born to do it.