Smartphones and tablets have become electronic babysitters for many children. They may keep kids out of mom’s hair for a while, but they do come with perils. According to a recent study, the devices are causing mental health problems in children as young as 2 years old. [1]

Researchers found that children who spend 7 hours a day or more on screens are more than twice as likely to be diagnosed with depression or anxiety than youngsters who use screens for an hour a day.

For the study, researchers analyzed data from more than 40,000 kids between the ages of 2 and 17. The data was collected as part of the Census Bureau’s 2016 National Survey of Children’s Health.

Most younger children in the study did not spend 7 or more hours a day using screens, but roughly 20% of 14- to 17-year-olds spent this amount of time on screens each day.

Teens are likely mirroring their parents’ habits: some estimates show that U.S. adults now spend approximately 10 hours a day watching TV or using digital devices. Interestingly, while this makes most adults more docile, nursery school children who used screens frequently were found to be twice as likely to lose their temper. [1] [2] 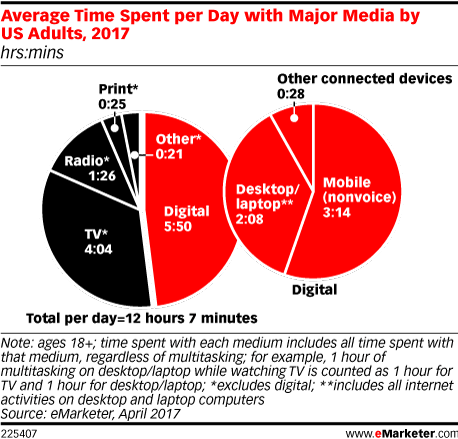 In addition to depression and anxiety, the study found that excessive screen time is also causing kids to be more distracted, less emotionally-stable, and causing them to struggle with completing tasks and making friends. [1]

Even kids who spent “just” 4 hours a day using screens were found to have problems, though to a lesser degree. Adolescents appeared to be more troubled than younger kids as a result of heavy screen use.

But it gets worse. A single hour of screen time makes children and teens less curious, emotionally-unstable and causes them to have less self-control, which can lead to an increased risk of anxiety and depression. [2]

“At first, I was surprised that the associations were larger for adolescents than for younger children. However, teens spend more time on their phones and on social media, and we know from other research that these activities are more strongly linked to low wellbeing than watching TV and videos, which is most of younger children’s screen time.”

Her work has stoked concern among some parents, teachers, guidance counselors, and physicians that too much screen time – especially smartphones – may be linked to recent increases in teen depression and suicide.

“At the moment, the American Academy of Pediatrics guidelines set specific time limits on screen time only for children [ages] 5 and younger. These findings and others suggest the AAP should consider extending these specific limits to older children and adolescents.”

Current AAP recommendations state that children ages 2 to 5 should use screens for no more than 1 hour a day, not including time spent video chatting with family or friends. However, the academy does not recommend specific screen-time restrictions for older kids.

The study appears in the journal Preventative Medicine Reports.

Occasionally I check in with ThioJoe who I like for some of his computer/ technology/ smartphone updates… in a pretty “non-geeky” kind of way. This video caught my eye as it reminds of Corey’s descriptions of “smart glass pads”. ThioJoe points out some of the possibilities we are heading into, and many do align with what Corey (and others) have mentioned.

There is one short “creepy” part, where he talks about using implants (“666, anyone?”), but just look past that and see the neat things he posted.

Published on Sep 26, 2017
New smartphone features come out every year, but what might phones look like 10, 20, or even 50 years in the future? I came up with some crazy smartphone features that I think we will get eventually, and they’re all pretty amazing. Everything from foldable screens, to incredibly battery life, gigabit cellular, and more.

Thanks to Squarespace for sponsoring this video! Start your free trial today and http://squarespace.com/thiojoe to get 10% off your first purchase.