If you’re the friend who likes to cut out a little early to make sure you get enough sleep, some may consider you a lightweight; but there’s a good chance you look better than your night owl pals. A study published in the journal Royal Society Open Science suggests that not getting enough winks can affect your appearance, and not just how baggy your eyes look.

Researchers from the Karolinska Institute had 25 students, male and female, participate in a sleep experiment in which each individual used a kit to check how much sleep they got each night. The participants photographed themselves without makeup on, both after two nights of good sleep (7-9 hours) and after two nights of poor sleep (4 hours or less). [1] [2]

Read: A Good Night’s Sleep Is Vital for Memory Formation

The students were photographed after each night of sleep, and the pictures were shown to another group of 122 men and women living in Stockholm, Sweden, who were asked to rate the participants based on attractiveness, health, sleepiness, and trustworthiness. [3]

As you might have guessed, those who got the least amount of sleep were ranked lower in all categories. And in a kick to the gut, those in the observation group said they’d be less likely to socialize with the sleep-deprived participants.

So, if you look like you just rolled out of bed and got hit by a Mack truck, forget having a social life. Nice.

OK, maybe that’s being a little too harsh.

“Findings show that acute sleep deprivation and looking tired are related to decreased attractiveness and health, as perceived by others.” [1] 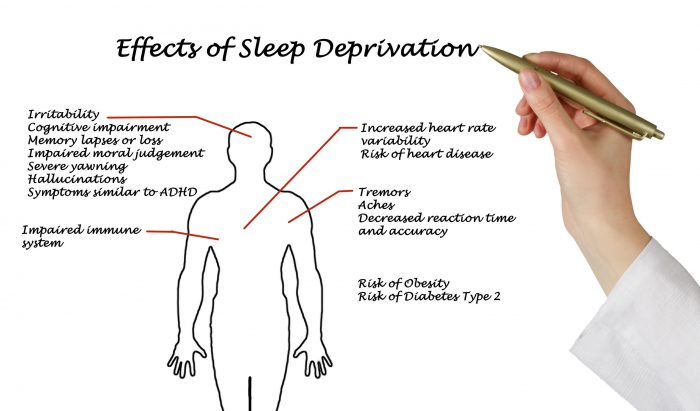 The scientists think the reason people don’t want to interact with someone who looks tired and worn out is based in evolutionary science, as “an unhealthy-looking face, whether due to sleep deprivation or otherwise” indicates that person might not be healthy.

This doesn’t make you a bad person, according to Gayle Brewer, Ph.D., a psychology expert not associated with the study. It’s just nature doing its job.

“Judgment of attractiveness is often unconscious, but we all do it, and we are able to pick up on even small cues like whether someone looks tired or unhealthy.” [1]

In case you’ve never been in the company of tired people, let me bring you up to speed: They’re usually not the most pleasant people in the world to hang out with, regardless of how put-together they may appear.

“An unhealthy-looking face, whether due to sleep deprivation or otherwise, might activate disease-avoiding mechanisms in others.” [2]

Dr. Tina Sundelin, who led the research, said you shouldn’t lose sleep over how you look after not getting enough Z’s. It’s usually a temporary problem.

“Most people can cope just fine if they miss out on a bit of sleep now and again.” [3]

Obesity always makes headlines for being one of the biggest health threats in the U.S. (as well as globally). But according to a recent study, loneliness and social isolation may be even more deadly than obesity or than smoking 15 cigarettes a day. Lack of social connection can be so deadly, in fact, that the feeling of loneliness is a stronger predictor of mortality than obesity. [1]

Social isolation and loneliness are different, but they are typically connected. Social isolation, or lack of social connection, means you have a lack of contact with other people. Loneliness is more about lacking an emotional connection, and it’s something you can feel even if you’re surrounded by people.

Julianne Holt-Lunstad, who is a professor of psychology and neuroscience at Brigham Young University in Provo, Utah, and her colleagues discovered that social isolation and loneliness may increase the risk of premature death by as much as 50%.

The researchers came to these conclusions by conducting two meta-analyses of studies exploring potential links between loneliness, social isolation, and mortality. [2]

Their findings were presented at the 125th Annual Convention of the American Psychological Association, held in Washington, D.C.

More than 300,000 adults encompassing 148 studies were involved in the first meta-analysis, while the second included 70 studies involving over 3.4 million adults.

In the first meta-analysis, Holt-Lunstad and her team found that the risk of dying early was 50% lower among people who said they had good social connections, compared with those who reported being more socially isolated.

The team found in the second meta-analysis that loneliness, social isolation, and living alone all increased the risk of early death.

Overall, the combination of loneliness, social isolation, and living alone was found to increase the risk of premature death as much, if not more, than obesity and other major health conditions. By comparison, obesity increases the risk of dying before age 70 by about 30%. [1] [3]

“There is robust evidence that social isolation and loneliness significantly increase risk for premature mortality, and the magnitude of the risk exceeds that of many leading health indicators.” [3]

This, according to Holt-Lunstad, is worrisome considering that the aging population is growing. [2]

“Indeed, many nations around the world now suggest we are facing a ‘loneliness epidemic.’ The challenge we face now is what can be done about it.” [2]

“Being connected to others socially is widely considered a fundamental human need––crucial to both well-being and survival.

Extreme examples show infants in custodial care who lack human contact fail to thrive and often die, and indeed, social isolation or solitary confinement has been used as a form of punishment.

Yet an increasing portion of the population now experiences isolation regularly.” [3]

That’s why she believes that social connections must be treated as a public health concern. To ease the burden, Holt-Lunstad says she thinks policy makers and community leaders need to provide even greater opportunities for locals to come together, such as by adding recreation centers and community gardens.[1]

Additionally, schools should emphasize the importance of friendship and connectedness, she said, and doctors should include social connectedness in medical screening.

So many people boast hundreds of Facebook “friends” but can barely count on two hands how many true friends they have in real life (if they can tell the difference at all).

If you feel that you’ve become socially isolated, why not try volunteering? It’s a great way to do good, feel better about yourself, and meet new people, i.e., potential friends.

Isolation increases your risk of premature death, but volunteering has been shown to lower the risk.