There are many “secrets” to leading a long and healthy life (though they aren’t really secrets). One of them – which I’m sure you’ve heard time and time again – is to limit sugar intake (especially added sugars). One of the best ways to do that is to cut down on sugary, health-hazardous beverages.

According to numerous pieces of research, any sugar-sweetened drink can cut years off of your life, including sports drinks, fruit drinks, and energy drinks. Just because there is a picture of fruit on the label doesn’t mean it’s safe for consumption.

And, as you will see, just because you see the word “diet” on the label, you shouldn’t assume that means “healthier.”

Findings of a Recent Study

To look for a potential link between sugary drink consumption and early death, researchers analyzed information from more than 80,000 women and 37,000 men in the health profession and followed the participants for about 30 years. Each participant was asked to complete a survey about their diet every 4 years, and they answered questions about their lifestyle and overall health every 2 years.

The more sugary drinks a participant consumed, the greater their risk of death was during the study period.

The findings remained unchanged after researchers accounted for other risk factors for early death and disease, including smoking, alcohol use, physical activity levels, and consumption of fruit and vegetables, and red meat.

“Our results provide further support to limit intake of SSBs (sugar-sweetened beverages) and to replace them with other beverages, preferably water, to improve overall health and longevity.”

Dr. Walter Willett, study co-author and a professor of epidemiology and nutrition at the same institution, said:

“These findings are consistent with the known adverse effects of high sugar intake on metabolic risk factors; and the strong evidence that drinking sugar-sweetened beverages increased the risk of Type 2 diabetes, itself a major risk factor for early death.”

Another Main Cause: Cancer

The second main cause of early death in the study was cancer, primarily of the colon and breast. [2]

Another important takeaway from the study was the finding that diet drinks may not necessarily be safer alternatives to sugar-sweetened beverages. Women who consumed 4 or more servings of artificially-sweetened drinks per day had an increased risk of early death. [1]

Compared with women who drank sugary beverages less than once a month, women who had more than 2 servings a day had a 63% increased risk of early death. Men who did the same had a 29% increased risk. [2]

That doesn’t necessarily mean that diet drinks directly caused early death in those people; it may be that people with known heart disease risks switched to diet drinks because of their existing health conditions.

Read: Poor Diet Caused Nearly Half of All Deaths in the U.S. in 2012

The team said that more research is needed to better examine the link between high diet beverage consumption and heart disease. Another important thing to note is that the study revolved around surveys and self-reporting – which is a method notoriously-known for its inaccuracies.[1]

The study is published in the journal Circulation.

The 2 most important keys to a healthy lifestyle are diet and exercise. But Coca-Cola desperately wants people to believe that diet isn’t as important as exercise, which isn’t much of a surprise, considering the products the company makes. But what you may not know is that Coca-Cola is willing to sink to low levels in order to deceive the public in order to sell more products.

A report published January 29 in the health policy journal Milbank Quarterly reveals that e-mails between Coca-Cola and top officials from the U.S. Centers for Disease Control and Prevention (CDC) show that the company tried to use its influence with the agency to push the World Health Organization (WHO) to emphasize exercise over diet as the solution to the obesity epidemic.

The report is new, but the methods are not.

Back in 2013, the corporation came out with an advertising campaign centered on the nation’s status on health and obesity. In the ads, Coca-Cola claimed to be doing its part to fight obesity by creating products that help people lose weight. In other words, diet soda.

As we wrote in 2013, Coca-Cola explains in the campaign how it can play an important role in fighting obesity by offering low- and no-calorie beverages, and stresses that the obesity epidemic is not caused simply by consuming the calories in its products.

Coca-Cola has been accused in the past of paying scientists to shift the blame away from junk food and sugary drinks for causing the obesity epidemic. The company was even caught red-handed donating large sums of money to “charities” that published propaganda telling people that soda has nothing to do with obesity, diabetes, and the many other health problems associated with obesity. It was further revealed that Coca-Cola paid health writers, bloggers, and spokespeople to push soda on the public as a healthy beverage.

This time, consumer groups are accusing the company of trying to sway the CDC toward policies that would benefit its products by corresponding with top agency officials and donating to the CDC Foundation. These alleged actions were discovered through Freedom of Information Act (FOIA) requests. 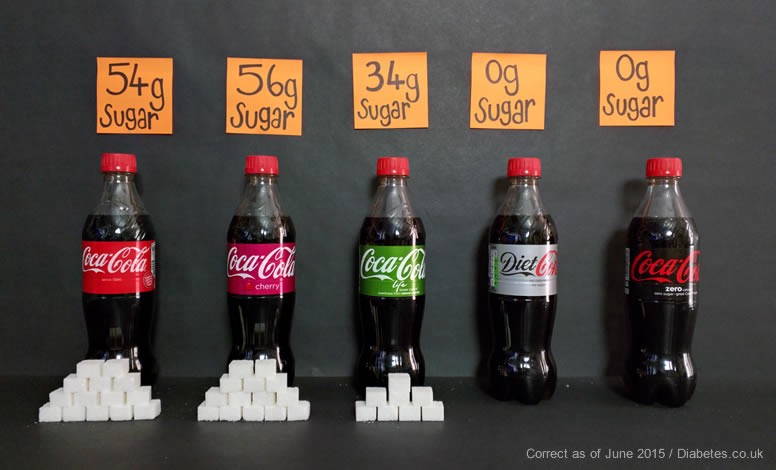 For example, former Coca-Cola senior vice president Alex Malaspina wrote in one newly discovered e-mail that the WHO “should not only consider sugary foods as the only cause of obesity but to also consider the lifestyle changes that have been occurring throughout the universe.”

“The e-mails we obtained using FOIA requests reveal efforts by Coca-Cola to lobby the CDC to advance corporate objectives rather than health, including to influence the World Health Organization.”

There is little doubt that the Western diet, as a whole, is contributing greatly to obesity worldwide, particularly in America. Americans’ lust for over-consuming fast food, junk food, and processed food is insatiable and the eating pattern carries much of the blame for the nation’s expanding waistline. But the Western diet is also sugar-laden, and that’s the information Coca-Cola wants kept out of the public eye.

And it’s not just Coca-Cola. PepsiCo and other beverage makers have sought to shift the blame away from sugar and toward a lack of physical activity by influencing policymakers and lawmakers, and through misleading marketing campaigns and so-called philanthropy for years.

Peter Lurie, president of the Center for Science in the Public Interest, said:

“One of the things the sugar industry has so far been quite successful in is denying the strong and emerging science related to the adverse effects of sugary drinks.”

Even before there were thousands of soda options to choose from, the sugar industry was trying to convince Americans that sugar was near-harmless. In the 1960’s, the industry paid Harvard scientists to author studies showing that the worst health effects of sugar were cavities and hyperactivity. It laid the blame for obesity and heart disease on fat, and the American public blindly bought into the propaganda. It wasn’t long before no-fat and low-fat products became commonplace.

In reality, low-fat foods contain about 20% more sugar than full-fat products. So while Americans were gobbling up more sugar and less fat thinking they were being healthy in doing so, the sugar industry lined its pockets on the money it made off of people’s naiveté and trusting natures. After all, if Harvard scientists say something is good for you, surely it is. Right?

Coca-Cola is still betting that buyers don’t understand the relationship between health and diet.

Nason Maani Hessari, a research fellow in the Department of Health Services Research and Policy at the London School of Hygiene & Tropical Medicine in the United Kingdom, who was first author of the new paper, said that:

“…these e-mail exchanges show what appear to be attempts to leverage personal relationships at the CDC to further these goals at the expense of population health – and lead to questions about whether organizations like the CDC should refrain from engaging in partnerships where there is such a potential for conflict of interest.” [2] 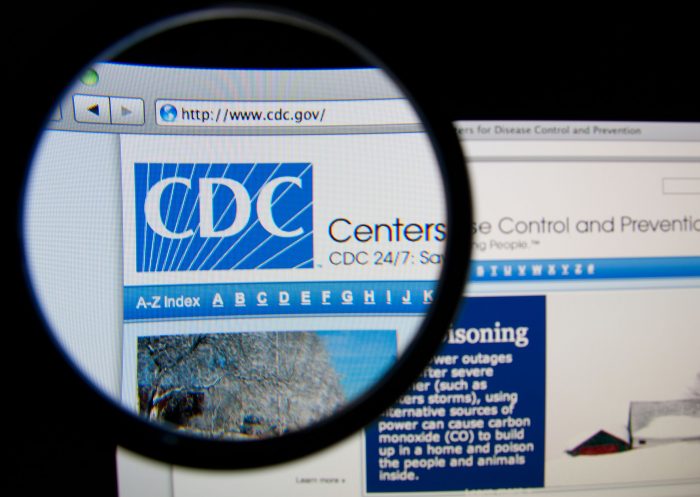 Dr. Michael Siegel, professor of community health sciences in the Boston University School of Public Health called the depth of collaboration between Coca-Cola and the CDC “a little bit scary.” He also co-authored of a paper published in 2016 in the American Journal of Preventative Medicine detailing how Coca-Cola and PepsiCo sponsored at least 96 national health organizations at the same time the companies were lobbying against public health bills intended to reduce how many sugary sodas people drink.

“To me, the most disturbing aspect was the extent to which CDC officials were actually helping the company achieve its lobbying objective, and there were examples of giving them advice, providing contact information, helping them try to fight against soda taxes.

The larger implications of this, in my view, are that it really highlights the need to put up barrier walls – talking about building walls – but we need to have some barrier walls built between our government agencies and these corporations to prevent undue influence from occurring.”

Here is the truth: The occasional sugary drink is fine, but it should be a treat, and not part of your daily lifestyle – no matter what anyone says.

Oh, America. You were doing such a good job of cutting your sugar intake, but you’re back to drinking too many sugary beverages. Statistics released by the CDC in January show that after a decade of falling consumption, Americans of all ages are consuming the same amount of sugary drinks as they were in 2009-2010, which is when the last time the CDC published comparable data. [1] 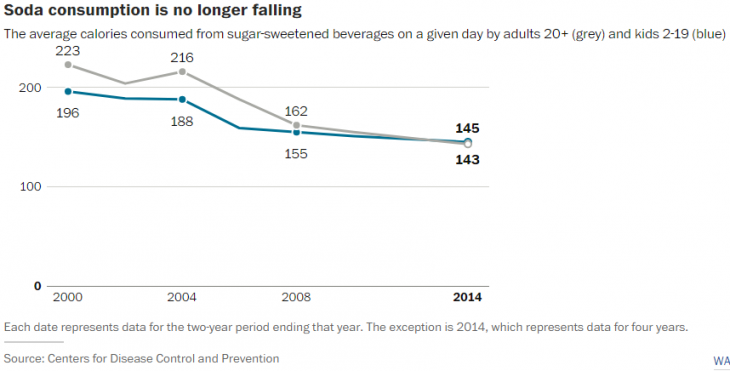 Rachel Johnson, a professor of nutrition at the University of Vermont and a spokeswoman for the American Heart Association, said:

“The amount of sugar that children in particular consume is still astounding. We recommend that children drink soda once a week or less. We’re seeing that two-thirds drink it on a daily basis.”

You would think that with all the warnings about sugar consumption and the glut of health problems it causes, more people would swap soda, coffee drinks, and energy drinks for a cool glass of water. But that’s not the case, and CDC officials can’t fully explain why, though they have a couple of theories.

One possibility is that sales of teas, flavored waters, energy drinks, and other amped-up beverages are rising, even as soda sales are dropping. The market research firm Euromonitor has data that seems to back that theory.

Its numbers show that the U.S. market for conventional carbonated sodas contracted .6% between 2011 and 2016. During that same period, sales of energy drinks, sports drinks, and iced teas and bottled coffees grew by between 5% and 13%.

Another theory is that the initial decline in sugary-drink consumption occurred among upper-income individuals and others who were particularly receptive to changing their diet habits.

Other Sugar Findings by the CDC 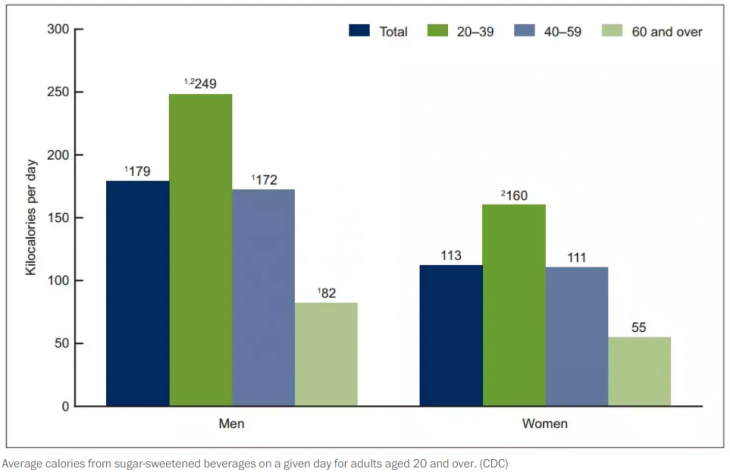 Current U.S. dietary guidelines recommend consuming less than 10% – just 6 teaspoons – of your daily calories from added sugars, and limiting or removing sugary drinks from your diet. 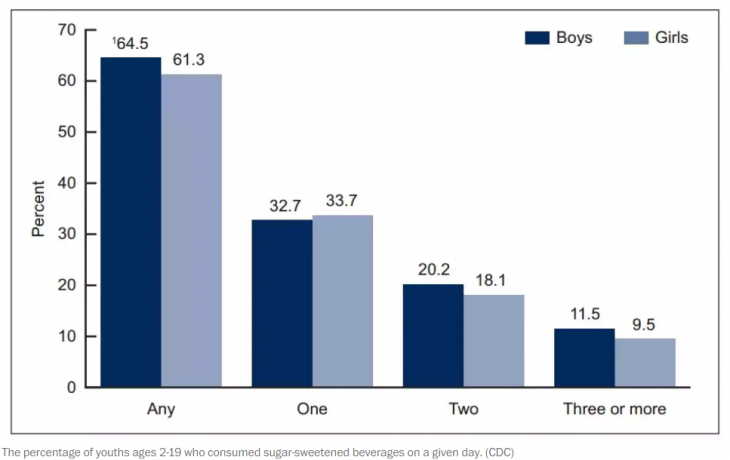 Read: Is a Soda Tax the Solution to Reducing Sugar-Consumption Worldwide?

Asher Rosinger, epidemic intelligence service officer at the CDC and lead author of the study, said:

“If you extrapolate our findings out, that means 111 million adults and 147 million kids still drink at least some sugar-sweetened beverage daily.

This study is important, because consuming sugar-sweetened beverages is associated with weight gain, Type 2 diabetes, dental caries (cavities) and dyslipidemia (high cholesterol) in children, all of which have serious negative downstream health consequences.” [1] 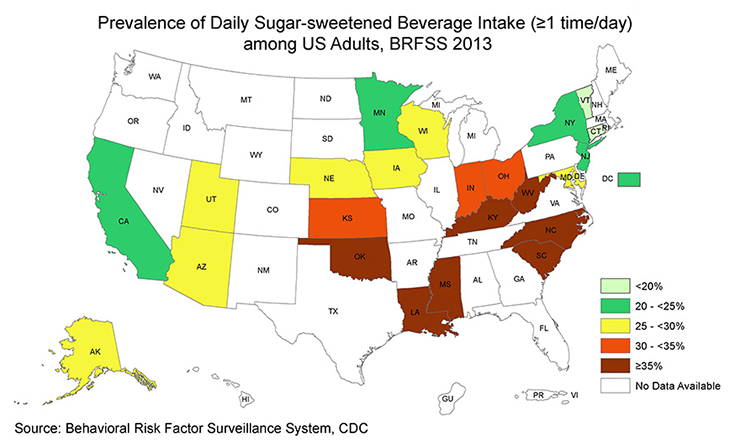 Dariush Mozaffarian, dean of the Friedman School of Nutrition Science and Policy at Tufts University, said the notion is worrisome and added:

One of the cultural changes on experts’ wish lists is for the beverage industry to stop marketing to children, which many processed food makers have already done. They would also like to see more soda taxes. Consumption has dropped as much as 20% in the past 3 years in Berkeley, California, where the nation’s first soda tax was approved.