Smartphones and tablets are a good way to keep young children quiet and entertained, but a recent study suggests that babies and toddlers allowed too much screen time may go on to develop speech delays.

Study principal investigator Dr. Catherine Birken, a staff pediatrician and scientist at the Hospital for Sick Children in Toronto, says:

“Handheld devices are everywhere these days. While new pediatric guidelines suggest limiting screen time for babies and toddlers, we believe that the use of smartphones and tablets with young children has become quite common. This is the first study to report an association between handheld screen time and increased risk of expressive language delay.” [1]

The American Academy of Family Physicians explains expressive language as the ability to convey feelings and information. The AAP discourages any type of screen media in children younger than 18 months.

However, the American Academy of Pediatrics moved away last year from recommending a total ban on screen time in children 18-24 months. Instead, the group says that parents of children in this age group should choose high-quality programming and view it with their children to make sure they understand what they are seeing. [2]

One thing is clear: Unsupervised, unlimited screen time is not good for developing brains.

The study involved nearly 900 children from Toronto between the ages of 6 months and 2 years. At their 18-month checkup, 20% of the children of the youngsters were already spending an average of 28 minutes per day using handheld electronic gadgets, such as tablets, smartphones, and electronic games. [1]

The team used an infant toddler checklist, a validated screening tool, to assess the children’s language development at 18 months. They wanted to find out whether the child used sounds or words get attention or help, if they were able to put words together, and how many words each child used. [2]

The researchers found that the more time a child spent using handheld devices, the more likely that child was to have delays in expressive speech. To be specific, every 30 minutes of screen time was associated with a 49% increased risk of expressive speech delay. 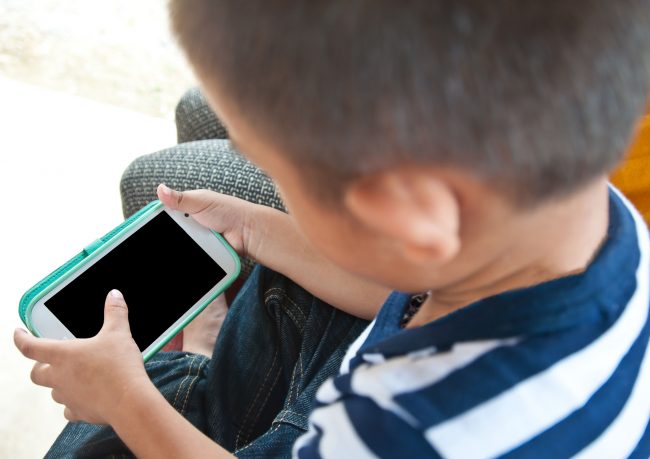 The study did not find any link between the use of a handheld device and other areas of communication, such as gestures, body language, and social interaction. [2]

The study also did not prove a direct cause-and-effect link between handheld devices and speech delays. The team concluded that more research is needed to better understand the connection. [1]

“This is an important study in highlighting some of the potential risks associated with media use, and specifically handheld mobile devices. What’s driving the effect is very important. The negative effects may be due to screen time replacing parent-child interaction (playing, reading, talking, singing, etc.) which are critical for healthy development.” [2]

The study was presented at the 2017 Pediatric Academic Societies Meeting in San Francisco.

Gadgets like smartphones and tablets are fun, and can be very educational, but they are also associated with stress and anxiety in families that fail to set appropriate boundaries for their use, particularly when it comes to when children can use the devices, and for how long.

As a result, many young children are growing up to be completely dependent on technology. According to the discouraging findings of a study published last spring, about 59% of children ages 12-18 are addicted to their smartphones.

Yet another study published last fall showed that kids as young as 6 are so glued to technology, that even having a phone, tablet, or computer in the room is enough to prevent them from sleeping.

Some adults aren’t much better, let’s be honest. But setting guidelines now may help the littlest ones among us to become more balanced and independent when it comes to technology.