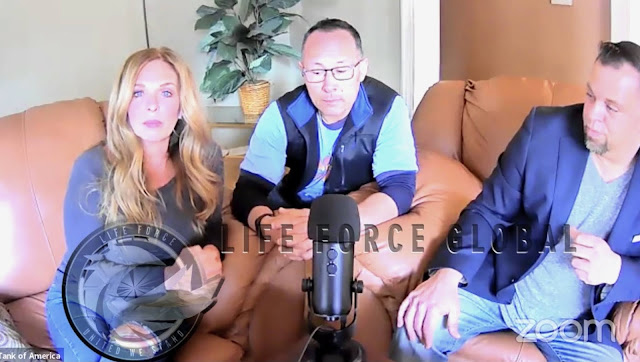 Terran: Dear Stan, Kim Goguen recently did a video from Durango [titled on the app as “Get all of our exclusive content, Here’s how!”]. She claims there was a meeting with various ones from DC and Generals and Admirals about the mineral assets in the Durango area. She claims “they” (the deep state) have been using boring machines to mine the assets in the area.  And that the “Dulce War” was about getting access to these minerals from a bore hole begun in Dulce NM D.U.M.B. which is 50 miles away. I suspected there was much more to the Durango/Silverton/Telluride area than it seemed when I lived there in 2018. Telluride in particular is filled with $2 million homes and has only one road into it.

Terran: Kim kept referring obliquely to an “agreement” to share the Durango Mineral assets negotiated with “the others”. Who are “the others” which she claims predate humanity? What group does Kim’s “enforcement”?
Stan X: TERRAN. THE “OTHERS” WHICH SHE CLAIMS “PREDATE HUMANITY” ARE ELEMENTS OF THE “ALLIANCE”. THE “ALLIANCE” IS A FRACTURED/COMPARTMENTALIZED GROUP THAT RETAINS THE “SEMBLENCES” OF “POWER” IN THIS NOW WITH THE NEW AMERICAN “ADMINISTRATION” AS THE “FRONT OFFICE”. THERE ARE “REMNANTS” OF ANTARCTIC “RESIDENTS” INCLUDED WITHIN THIS “ALLIANCE”.
Stan X: THE “ENFORCEMENT” GROUP IS A “KNOWN” SSP/EARTHSPHERE ALLIANCE OF “FOR HIRE MERCENARIES” THAT REMAIN INTACT IN THIS NOW. INCLUDING BUT NOT ENTIRELY COMPOSED OF FORMER “BLACKWATER”/XI/SSP” OPERATIVES.
Terran: Clarfication question, Xi is the later name of blackwater, the Xi you mention is that a reference to the changed name of blackwater or the Chinese Leader?
Stan X: TERRAN. PRIVATE SECURITY/SOLDIERS. NOT CCP. DATA COLLECTORS. STAN. X. END.
Terran: Kim claims if any group, including hers, violates the agreement/treaty (banking collateralized Durango mineral assets)) they die under the terms of the treaty. Who enforces these terms? Are “the others” Nazis? Nonlocals? (if so which ones?).
Stan X: THERE IS NO DATA TO SHARE REGARDING THE CLAIM OF “IF ANY GROUP VIOLATES ‘THE AGREEMENT’ THEY DIE”. THERE IS NO KNOWN “ENFORCEMENT” OF THOSE “TERMS”.
Terran: Who does Kim mean when she says “Black Sun”?  I know about the magi of that belief system, they are scattered about the alps. The Nazis also had Black Sun beliefs.
Stan X: THE “OTHERS” ARE NOT “NAZIS” IN THE “TRADITIONAL EARTHSPHERE” TERMS. THERE ARE NONLOCALS INCLUDED IN THIS “ALLIANCE”. INCLUDING “KNOWN” ASHTAR COMMAND AGENTS.  [Ashtar Command is by definition Pleiadian]

Stan X: TERRAN. THERE IS NOT “COMPLETE DATA” REGARDING THE REFERENCE TO “THE BLACK SUN”. THE “BLACK SUN” REFERS TO MANY “SUB GROUPS” THROUGHOUT MULTIPLE REALITIES. THERE IS NO DATA REGARDING “MILITARIZED/MANAGEMENT” BY “EARTHSPHERE BLACK SUN” AGENTS/MEMBERS.

Terran: Kim is very dismissive of Trump. Why?

Stan X: TERRAN. THERE IS NO DATA TO SHARE REGARDING THE MOTIVES OF “DISMISSING” TRUMP. IT IS NOT KNOWN “WHY” IN THIS MOMENT OF NOW. DATA COLLECTORS. STAN.X. END.
Terran: Why does Kim refer to Space force as “waste of space force”?  Is this because of her affiliation SSP operatives?
Stan X: TERRAN. THERE IS NO DATA FOR “WHY”.
Terran: What “star nations” are in the “alliance”?
Stan X: ‘NONLOCALS” INCLUDE PLEIADIAN. SIRIAN.
Terran: What earth groups are in it?  The Antarctic remnants, would they be what was left from Admiral Canaris group?  Are there any from Andorra?
Stan X: “LOCAL” INCLUDE “WHITE HAT OPERATIVES”. NO OTHER DATA IS AVAILABLE. DATA COLLECTORS. STAN. X. END.
Update 2:

Terran: Stan, did Kim Goguen have anything to do with the events with RKB and HATJ in 2017? She claims she got her job in 2016, and associate of hers said Marduk appointed Kim.

Stan X: TERRAN. THE CHINESE ELDERS ARE IN CONTROL OF KIM. SHE IS THEIR PROXY. AGENT. SHE HAD NO DIRECT INFLUENCE ON EVENTS BUT WAS MOST LIKELY MADE AWARE AFTER COMPLETION. DATA COLLECTORS. STAN. C. END.