Nazi Germany in the 1920s and 1930s was the most scientifically advanced country on Earth. Several races of Galactics were making contact with Germany at that time.  Reptilians, Zetas, Pleiadians are among the ones I know of.   There was a group of women known for their long hair called the Vril.  They were telepathically getting design specifications for anti-gravity spacecraft from some entity.  They seem to be associated with the Alderbaran star system, which Dr Salla has recently said the Nazi factions in Antarctica have established bases.
I grew up believing UFOs were real. My father was a P-38 fighter pilot over Germany in the latter half of the war.  He saw the “Hanibu” anti-gravitic craft as well as German jets breaking the sound barrier.
When Germany collapsed, Reptilians continued working with a remnant of Nazi Germany who had space travel capability from secret bases in Antarctica (a joint use base) and South America (Argentina, Paraguay, Uruguay primarily, but there was also Nazi bases in the US).
When the power center shifted to the United States after WWII, those same groups contacted US leaders.The Pleiadians were largely rebuffed, as their technology was contingent on pursuing a peaceful future, and that was just too much for those US Presidents during the Cold War.  All they wanted was tech to counter the Russians, they were not keen on raising consciousness..
There have been pictures circulating for a number of years now of “elites” with black eyes. Black eyes from fights and accidents do happen.  But these are usually the left eye.  This phenomena has become known as the “Black Eye Club“. The presumption has been this was bully tactics by the cabal on them to stay in line.  Recently rumors have circulated those black eyes are from a sting from a Vril Draco, which purportedly implants a mind control parasite that allows the Vril reptilian who implanted it to control the being. The elites we see with these black eyes are purportedly clones (copies) of the originals, who are secreted off somewhere (for their cooperation in producing the clone?)  It’s a puppet show essentially. 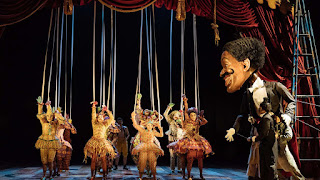 Short conversation with Stan X of the Andromedan Data Collectors

Terran: In Dr Sallas and Tompkins books they mention the Vril women in Germany with the. Long pony tail hair.

Terran: Recently there’s been claims that there is a type of reptilian with a proboscis that injects something [a brain controlling parasite] into the eye of beings (referenced by the elites in the “black eye club”) and it is said these elites with black eyes are clones of elites controlled by “vril reptilians” . Is there any truth to this story? And if so does that make the vril women mind controlled by another entity?

Terran note: I captured theses screen shot of a purported Vril parasites, the videos are full of creepy sound  frequencies that I don’t care to share in my blog post, but the image is below. I have no idea whether these are actual images.  But it does beg the question ass to why the elites in the medical community don’t want people taking proven and safe therapeutic drugs for COVID that are also anti-parasitic. 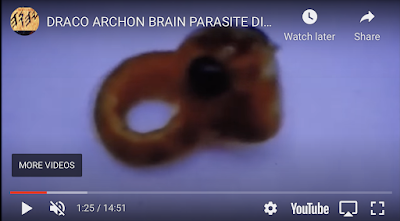 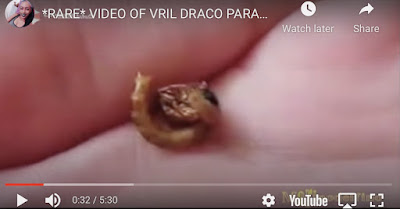 Stan X: TERRAN. THERE “WAS” TRUTH TO THE STORY. THAT “STORYLINE”. HAS BEEN “PLAYED OUT”. DATA. COLLECTORS. STAN. X. END.

Terran: Were the Vril women clones or victims of that?

Terran to Denice: (These energies have me on edge and I don’t know why.)

Terran to Denice: (A lot of people feeling off at the moment. Could it be these sea saw weather patterns going North and South?)

—
Terran note: Some related links on the VRIL. I know little about this subject and can vouch for none of these web sites. These are references for your research not endorsements. It a rabbit hole I have not gone down before.  The data about Vril Reptilians made me wonder if the Vril women were a misdirection, which is why I inquired of Stan X of the Data Collectors.
I suspect Maria Orsic may have other origins than Vril. I dislike the term “Nordics” because it conflates the Ummo, Pleiaidans and other Scandanavian looking races into one origin and reference point in history. Its kind of like calling Scots, Germans, because they are both white.
The Vril data is all intertrwined with the beginning of the Thule Society, The Black Sun secret society (quite ancient) and other related spin offs from Nazi Germany.  In much of the imagery are Black Sun motifs.
Some have claimed Donald Trump is of the Black Sun.  As far as I can tell the only link to Trump is associative, in that Trump’s Uncle knew Nikola Tesla and Nikola Tesla’s papers were stolen by Nazi spy George Scherff.
I did encounter some Black Sun esoterics scattered around the alps, for them the Black Sun is a metaphor for energy harvesting from other people (basically a Black Hole sucking energy from its surroundings) which is absurd to me because you can get all the energy you want from Source without taking it from others,  through your heart. You have to operate from pure love to use it however.  The magi systems they view will and mind as more powerful than love (which they see as a sentiment).  They have the equation backwards.
We know from Dr Salla’s books and articles that the Nazis had a partnership with a reptilian base in Antarctica, and Admiral Canaris was involved in that. Dr Salla says the base was recently cleared or abandoned.  The Nazi cavern base in Antarctica was not part of the Andorra complex.  There is still ongoing skirmishes with the Nazis on Mars, according to Dr. Salla.

Maria Orsic and the Vril https://read.cash/@ruza17/marija-orsic-the-goddess-of-evil-of-unreal-beauty-who-swirled-htler-around-her-little-finger-eaf11901