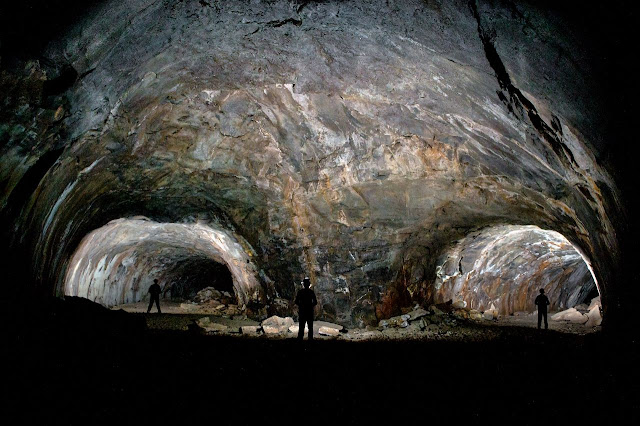 Terran: Denice sent over these visuals this morning. We don’t know who sent them telepathically, but they were detailed and intense for Denice. Its this kind of thing in 2014 that made me take notice of Denice and her abilities long before Thor contacted me through her.

I showered early and laid back down, still not feeling 100 percent. Closed my eyes and saw the purple and black sepia tones swirling. Have not had those in some time. Then I was moving through a house into a tunnel, holding a weapon or a light, in the form of a soldier. This movement through the tunnel continued for a few minutes and surprised me that I held the visual that long. Saw lots of details in the walls of the tunnel, all rock, sharp edges where it was bored out with machinery. large enough for a 4 wheeler to drive through. Hit a dead end. Backed up. Went down another tunnel.

There was a reptilian. Huge. Size of a horse. large legs, short arms. shaped like a T-Rex, but thinner, smaller, and more limber. backed up the wall, fought with the soldier. I tried to get away. it went up through a tube of some sort to the surface. Big battle there, under a large craft. a few more reptiles, one the size of Godzilla hanging on the bottom of the craft. craft launched. two reptiles beneath it.

We were now out in space, looking back at earth, I felt like a third being on the bottom of that craft. We shot back down very quickly, and the smaller of the two went straight down a lava tube with me. I was on top, it was going deeper and faster.

It kept trying to collapse the lava tube on us. I could now see cracks of lava colors with the purple and black tones. I could see the details of the face of the being. Fear in its eyes. It wanted to collapse the tube and rest there for centuries until what was happening on the surface was long forgotten.

It shifted into 4 different faces. One was a human man, but larger than we are at this moment.

I heard a man’s voice. The battles were over. I was flying backward up out of the tube, hovering, all the colors kicked in and I was just above a house on the edge of a woods, bare trees. There were about 20 or so people gathered outside. Sunny. warm. fall. a big brown dog was playing by the side of the woods. I saw a man in brown tan pants and a white shirt with embroidery around the neck. maybe slavic?

Just then they all walked toward the woods and soldiers in grey camo and unusual helmets were coming out into the clearing near the house. Hundreds of them. The battle was over.

This was by far the longest visual I have ever had. It lasted 20 minutes. i was awake the whole time. I have already forgotten lots of details, but suffice it to say, it was an epic battle. With lots of downloads.

I have to head to work now. But this feels huge. It feels like whatever was holding us in this pattern of ‘stasis’ is now over.

Terran: Can I publish your visuals?
Denice: Sure?. Messy typing though.
Denice: Probably needs spell checked.
Denice: What is your feel from it?
Terran: Someone sent you the visuals from a real battle or you have an inbodyment seeing it.
Terran: I think it was meant as encouragement. It’s just about over.
Denice: Feels like I was viewing from inside a soldier. But not me.
Denice: I could see and feel the movement. But no sound or smell.
Denice: Definitely feels like encouragement that it is over.
Terran: Get any emotions with it?
Denice: It was a very new experience for me?. Never had one that detailed or long before.
Terran: Galactic soldier or earth one?
Denice: SSP. [I think she meant Space Force or other US Military] Earth based. American uniform from my vantage. The soldiers in the woods at the end feel nonlocal.