DHA Milk made by Horizon, one of the largest organic brands in the U.S., isn’t nearly as “natural” as the company advertises it to be, according to an investigation by The Washington Post. It contains a type of algae, Schizochytrium, which is fed corn syrup. Corn is the #1 crop grown in the United States, and nearly all of it is genetically modified.

Schizochytrium is carefully tended, kept warm, and fed corn syrup, resulting in a substance that resembles corn oil, but has a slightly fishy taste. It is then marketed as the nutritional supplement DHA, and added to millions of cartons of organic Horizon milk.

Horizon uses corn-syrup enriched algal oil to advertise health benefits and charge more for their DHA-enhanced milk than it does for its regular milk.

Is the Milk Really Organic?

Charlotte Vallaeys, a senior policy analyst at Consumer Reports seems to think not. She said the addition of algal oil defeats the whole purpose of buying and eating organic.

The “All Natural” Scam: How to Shop Healthy for You and Your Family

“We do not think that [the oil] belongs in organic foods. When an organic milk carton says it has higher levels of beneficial nutrients, like omega-3 fats, consumers want that to be the result of good farming practices … not from additives made in a factory.”

Organic food companies desperately want the coveted “USDA Organic” seal on their products, knowing it can easily double the price of an item. But many companies are constantly pushing the USDA’s limits of what can be considered “organic.” Meanwhile, consumer groups want a narrower, “purer,” definition.

According to The Post, USDA officials must have misread federal regulations when they allowed the use of oil and similar additives, at least originally. Algal oil was introduced into milk in 2007. In 2012, the USDA quietly acknowledged that some federal regulations had been “incorrectly interpreted.” Rather than disrupt the market, the agency opted not to reverse course.

That was good news for Horizon.

In a statement, a Horizon spokesperson said:

“Millions of people choose our Horizon Organic milk with DHA Omega-3 for the added benefits DHA Omega-3s are thought to deliver.”

The spokesperson added that the algal oil may improve heart, brain, and eye health. 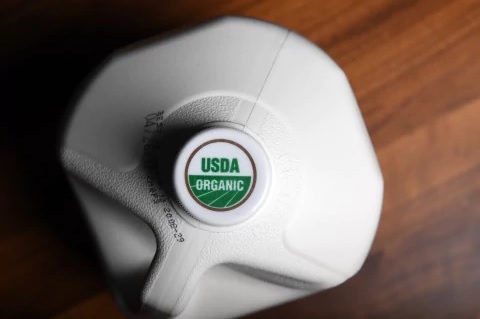 ‘People Buying into a Lie’

Horizon milk is a popular product, with more than 26 million gallons of the milk supplemented with the algal oil sold in the last year – that’s 14% of all organic milk gallons sold. Retail sales of the product topped $250 million in the past year. The Horizon DHA milk typically costs 30 cents more than plain Horizon milk.

However, critics argue that people are buying into a lie, and that supplementing “USDA Organic” products with algal oil is a slap in the face to consumers who expect that organic foods are nature-made and not laboratory-made, and that the nutrients in organic foods and drinks are good enough without additives.

Barry Flamm, former chair of the National Organic Standards Board, which makes recommendations to the USDA, said:

“Additives just don’t have any place in organics at all. You might say additives should be allowed for health reasons, but I never saw an additive that you couldn’t get in real foods.”

Most buyers agree. Past Consumer Reports surveys show 7 out of 10 buyers think the USDA should not permit the use of non-organic ingredients in organic food production unless they are deemed essential.

The Cornucopia Institute, a national food and farm policy watchdog, says on its website that their own researchers had made the discovery that organic food companies were supplementing their products with algal oil. Additionally, the institute says it filed a formal legal complaint, which sparked the story in The Post.