Chagas disease, or “kissing bug disease,” could have a higher mortality rate than previously thought. Why? Because it often goes unreported, and more than half of the U.S. is reporting new cases. [1] [2]

Chagas is largely asymptomatic, so most people don’t know they have it. Chagas, which is transmitted by the so-called “kissing bug,” can cause heart and intestinal problems, but too often the damage isn’t realized until it’s too late, or doctors don’t associate symptoms with the disease. [1]

Dr. Ester Cerdeira Sabino, a co-leader in the study, explained:

“Most people who get infected, carry on with their lives … unaware they were bitten. A lot of mortality data doesn’t account for Chagas, so you underestimate the effect of the disease. What the parasite does to the body takes a long time; [it] slowly goes into the heart and destroys it.”

Chagas disease is 1 of 5 parasitic infections the U.S. Centers for Disease Control is currently targeting for public health action. [2]

Kissing Bugs and Their Deadly Parasites 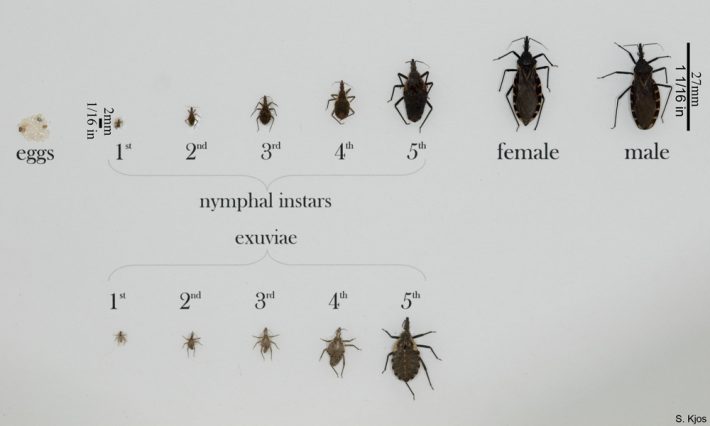 The scientific name for kissing bugs is Triatomine bugs, but they’re also sometimes called assassin bugs and vampire bugs. The blood-sucking insects usually bite humans when they’re asleep, either on the eyes or the lips. People can also accidentally scratch or rub the bugs’ feces into their eyes or mouth, or accidentally consume contaminated food. [1] [2]

After feeding on a person, parasites in the kissing bug’s feces can enter the body through breaks in the skin. [2]

When people do show symptoms, it is during the acute phase, the first few weeks after infection. An infected person might experience mild symptoms, such as fever, aches, and fatigue. The most noticeable sign of infection is called Romaña’s sign – when the eyelids near the point of infection start to swell.

During the chronic phase, cardiac or intestinal complications can develop.

There are antiparasitic drugs on the market that can treat Chagas, but considering how rarely the disease goes detected, the best offense is a good defense. The most effective way to do this is by controlling the kissing bug population.

Kissing bugs like to hang out under porches, in dog houses, and under piles of rocks and wood. To prevent infestation, seal cracks and gaps, remove wood or rock piles near your home, and don’t let pets sleep outdoors. Roach hotels and other bait-like traps don’t work against kissing bugs.

Your chances of being bitten by a Triatomine bug are relatively low, but if you suspect you have been bitten, don’t ignore it – talk to your doctor immediately. [3]

In a May, 2017 study published in the journal PLOS Neglected Tropical Diseases, infection with Chagas was found to increase risk of death by 2 to 3 times from all causes.

“In every age category, people who had Chagas died more than people who didn’t have Chagas. So if you’re infected early in life, you should be treated.” [1]