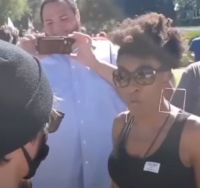 Seems that the woman in this video really knows what #BLM is about, and it’s not about supporting or empowering the black community.

Right around the “outbreak” of the G Floyd deal in MPLS, I recall reading that BLM came in the last time in 2016. In between then and now, there’s been no activity whatsoever. So clearly (to me, at least) BLM is being used as a political tool, in an attempt to block the DJT from being re-elected. “Ain’t gonna work”.

[Note: have to kind of “listen around” the background conversations.]
.

As I mentioned in the title, I found this an excellent summary about what has happened with some in what is called, “the left”. And to be sure, this is not about all who consider themselves” left leaning” and/or “liberal”. I personally don’t go with any of those labels. Many I know (including myself) have connections from all sides of that arena of perspectives.

Anyway, this short video gives some indication of how “extreme” (or “out there”) some who call themselves “liberal” have gone.

Anyway, presented for everyone’s consideration. I liked it.
.

Published on Nov 18, 2018
I used to attend Evergreen State College and left just shortly after the infamous uprisings took place over pure ignorance and hatred. I then became very suspicious of the Radical Left, and now I am deciding to #walkaway from the Democratic Party and any form of tyrannical socialist group-think.

I was inspired to make this documentary, especially after seeing the growing consciousness arising from the #WalkAway movement. I am so delighted to share my story with y’all!

The #WalkAway campaign held a walk and event in Washington DC this weekend. I watched a few of the people who spoke there, including Brandon Straka, the founder of the #WalkAway movement.

I view these people as very awake and enlightened BEings, who are here to help “wake up the masses” from their slumber. It is happening. I’ve kept track of a couple of them, particularly Zak Hing and Owen Shroyer. There are many others.

Although the #WalkAway was initially about turning away from what the U.S. Democrat party has become (many parts of it demonstrating intolerance, demanding of “political correctness”, hatred of others (esp. Trump supporters), violent demonstrations, etc.), it has become more of a unifying movement for many on the (so-called) left and right. To me it has always been about “Walking Away” from any kinds of divisive PLS (Person Labeling System), and towards Unity, for all humanity.
.

Kp note: I found this short video by An0maly to be another excellent summary about what the #WalkAway movement is about. In my view, this represents a grand awakening of humanity, and it will continue.

The main point I aligned with here is that so much of current “buzz” among some is the idea that they are “victims” of something or other. And that is not what I and many others have learned in their spiritual growth path… to stop playing “victim” and become the main player in one’s journey.
.

This has been going around and has really “taken off”. I have held off a bit from posting anything about it, but now, with the US Independence Day celebrations coming tomorrow, this, I feel, really fits in. In essence, to me this is about “Declaring Independence (INNER-dependence)” in all arenas of life, including political, cultural, societal, familial, “allegiances”, and BEing who YOU are. It is very clear that Brandon Straka’s message, #WalkAway, has hit an ENORMOUS “Chord of Resonance” within Hue-manity. Very clear.

The message in his original video is direct and well crafted and brings up numerous data points about the current, quite “out there”, so-called “liberal/Dem” movement that illustrate why he made this video.

The second video is a longer discussion between Brandon and DeflatingAtheism guy. I’ve not seen this anywhere else, so perhaps some will enjoy it. Particularly at 19:50. where DeflatingAtheism guy discusses how many people (and MSM), when talking about Trump, just launch into a stream of adjectives but no evidence. And that they have launched what might be called an “oppression industry”.

Look, the bottom line for me has always been to NOT label anyone. Perhaps some could apply the #WalkAway to “labeling” things, people, etc. How about #WalkAwayfromLabels??

The articles are after the second video, both from Natural News.
.

Published on May 26, 2018
Today I’m kicking off the #WalkAway campaign by releasing my video about why I am walking away from liberalism and the Democratic Party. It is my sincere hope that you will join me in this campaign and that we may start a movement in this country- which not only encourages others to walk away from the divisive left, but also takes back the narrative from the liberal media about what it means to be a conservative in America. It is up to all of us to make our voices heard and reclaim the truth.

The Democratic Party has taken for granted that it owns racial, sexual, and religious minorities in America. It has encouraged groupthink, hypocrisy, division, stereotyping, resentment, and the acceptance of victimhood mentality. And all the while, they have discouraged minorities from having independent thought, open dialogue, measured and informed opinion, and a motivation to succeed.
.

Streamed live on Jun 27, 2018
I talk with Brandon of The Unsilent Minority about his #WalkAway Campaign, encouraging people to abandon the modern Democratic Party.

Gay men #WALKAWAY from the collapsing Democrat party and its repulsive hatred, intolerance and bigotry