The U.S. Environmental Protection Agency (EPA) has delayed a safety rule aimed at ensuring that pesticides (which are linked to human health problems) are safely applied by adult agricultural workers. This, just days after 50 farm workers in California were sickened by pesticide poisoning. [1]

The Certification of Pesticide Applications safety rule had been scheduled to go into effect on March, 2017, but the EPA has proposed delaying it until May, 2018. The rule would require that workers be 18 years old to apply atrazine, chlorpyrifos, and other restricted-use pesticides for agricultural use. In addition, the rule would enforce other protections for workers applying pesticides out in the field.

The public was given less than a week to comment on the EPA’s proposed delay, which falls short of the 30 days federal agencies traditionally give for open comment periods, according to Colin O’Neil, the agriculture policy director at Environmental Working Group (EWG).

“In general, federal agencies normally hold open comment periods ranging from 30 to 60 days and in certain circumstances, when the issue is complex or the rule-making is complex, they extend it up to 180 days. It’s nearly unheard of, and very unprecedented, for agencies to have such short public comment periods.”

O’Neil’s fear: That the move sets a precedent for future public comment solicitations.

“This has an alarming tone for how the EPA under the Trump administration plans to solicit public comments and shows how the brazen disregard for the public’s input on issues important to parents, families, and kids’ health.”

The EPA says that “the agency has determined that a full 30-day comment period is impractical, unnecessary, and contrary to the public interest.”

Atrazine is one of the most commonly-applied pesticide in the United States. It’s mainly applied to corn, and is a known hormone disruptor that is linked to decreased fetal development, and increased risk of miscarriage and abdominal defects. It is also a possible carcinogen, according to the Pesticide Action Network.

Chlorpyrifos is similar to atrazine, but is mainly applied to oranges, apples, and other fruits. It attacks the nervous system, and short-term exposure can cause weakness, nausea, and headaches. Exposure to the pesticide over longer periods can lead to neurodevelopmental issues, lower IQ among children, and can act as an endocrine disruptor.

The Obama administration mulled banning chlorpyrifos, but Trump’s EPA has rejected calls to ban it outright, citing a need to “provide regulation certainty to the thousands of American farms that rely on chlorpyrifos.”

The Need for more Research and Safety Protocols

There is currently no minimum age to how old farmworkers must be to apply pesticides, and it’s a downright crime. Research has shown that children who live near pesticides applied to soy – including chlorpyrifos – suffer serious genetic damage. Chlorpyrifos has also been linked to brain disorders in children.

“For the first time, EPA was going to make sure that kids and youths are not applying restricted-use pesticides. We felt it was alarming and appalling that the Trump administration would put aside health and safety in further delaying this important rule aimed at protecting farmworkers and young Americans from dangerous pesticides.”

Restricted-use pesticides are defined by the EPA as those with the “potential to cause unreasonable adverse effects to the environment and injury to applicators or bystanders without added restrictions.” [2]

By law, anyone who applies restricted-use pesticides must complete safety training. The proposed rule would have required workers who use the pesticides to be re-trained every 5 years, as well as to “verify the identity of persons seeking certification.”

In early May, more than 50 farmworkers in Bakersfield, California, were sickened when a nearby mandarin orchard was sprayed with a chlorpyrifos-based pesticide. A dozen farmworkers sought medical attention, but the others left before medical personnel and local authorities arrived. Officials believe they may have left because they were undocumented workers. [1]

Jeannie Economos, the project coordinator for Pesticide Safety and Environmental Health at the Farmworker Association of Florida, said:

“We had farmworkers tell us outright that their contractors or their supervisors will tell them ‘if you complain, I’m going to turn you into immigration. Whether they would or they won’t isn’t the point, but it’s enough of an intimidation and threat to the farmworkers to not stand up for their rights.”

More Americans claim to have food allergies than ever before, but a report published in 2016 from the National Academy of Sciences says that it’s hard to know how many people in the U.S. actually have food allergies. Although many healthcare professionals involved in patient care agree that an increase has occurred, specifying its actual extent is complicated by factors such as inconsistent data or studies that use variable methods.

Part of the problem is that many people self-diagnose and can easily misinterpret their symptoms. Food allergies can be mistaken for gluten sensitivity or lactose intolerance, e.g., neither of which fits the medical definition of an allergy. [1]

Dr. Virginia Stallings, a board-certified nutrition pediatrician at the Children’s Hospital of Philadelphia and the chair of the committee that wrote the report, said:

“There are a lot of misconceptions about what a food allergy is.”

One of the ways in which a misinterpretation arises is when parents introduce milk or another new food into their child’s diet, and then see that the child has an upset stomach or other gastrointestinal symptoms. These symptoms could indicate lactose intolerance, but the parents may suspect a food allergy. In reality, food intolerance and food allergy are two different conditions.

“The reason food allergy symptoms are often confused with other [conditions] such as lactose intolerance is because there’s an overlap in some of the symptoms.”

The panel estimated that about 5% of U.S. children have legitimate food allergies, and wrote that:

“Questions persist about whether food allergy prevalence has been on the rise within the past two decades and why. The current data do not unequivocally support the occurrence of such a rise.”

The Definition of a Food Allergy

Allergies are caused by an immune response to a normally-harmless food or other substance. Allergies typically cause hives and swelling or gastrointestinal distress. Severe food allergies can be life-threatening. In contrast, someone with lactose intolerance can’t easily digest the natural sugar in milk, and the condition is not life-threatening – just highly uncomfortable. [1]

As the American Academy of Pediatrics points out, “while lactose intolerance can cause a great deal of discomfort, it will not produce a life-threatening reaction such as anaphylaxis.” [1]

Anaphylaxis (severe allergic reaction) can cause someone to go into shock within seconds or minutes of contact with the food or substance (latex, e.g.) that he or she is allergic to. A sudden drop in blood pressure occurs; and the airways narrow, which blocks normal breathing. Other symptoms of anaphylactic shock can include a rapid, weak pulse a skin rash, and nausea and vomiting. [3]

Another problem making it difficult to determine how many people have food allergies is the fact that diagnosing food allergies can be complicated. Stallings said that there’s no single skin or blood test that lets physicians accurately determine whether a person has an allergy to a specific food. [1]

“We unfortunately see kids avoiding a food unnecessarily because of some fear of a potential allergy.”

The best diagnostic tool at experts’ disposal is an oral food challenge, according to Lanser. Under medical supervision, patients eat small amounts of the food they are suspected of being allergic to. Lanser explained:

“We start with a small amount of food and slowly give increasing doses up to a full serving.”

If the patient has a reaction during the test, “obviously we stop and treat,” he said.

The authors of the report wrote:

“The patient’s medical history and other test results, such as from a skin prick test, can suggest the likelihood of a food allergy, but in some cases an oral food challenge – which involves a gradual, medically supervised ingestion of increasingly larger doses of the food being tested as a possible allergen – is needed to confirm diagnosis. ” [2]

That’s a lot of work to confirm an allergy, so people often just go on a hunch.

Lanser said he tests his patients once a year to see if they’ve outgrown their food allergies. And they often have. Said Lanser:

“Milk and egg allergy are commonly outgrown. About 1 in 5 people outgrow their peanut allergy.” [1] 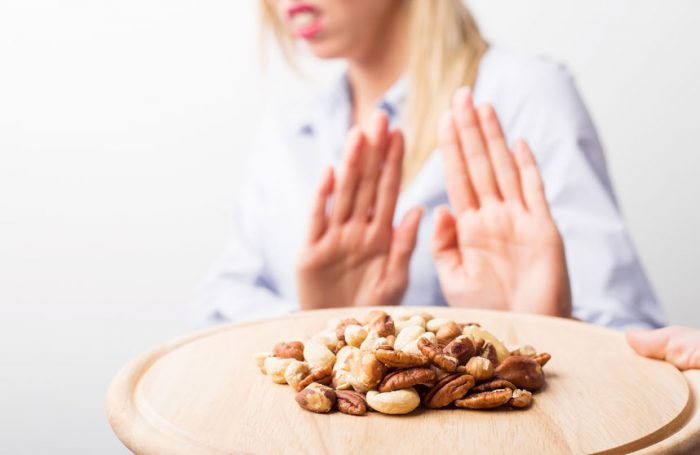 The authors of the new report recommend more research to determine the prevalence of food allergies. The report also includes many recommendations for addressing food-allergy safety: