This will be short (maybe). And it relates to this prior Kp Message and this Steven Seagall video post.

All those messages reflected what I’ve been going through internally as I faced one question: “Will I pay income taxes this year?” (for 2016)

I looked at both options (pay vs. not pay). A few months ago, I “got” that it was part of my path to actually pay this year (I’ve not paid (nor had to pay) for several years, due to income level). But this year, I also looked at the “not pay” option, and there was a tad of merit in that. Besides, I view this whole “tax thing” as a fancily crafted Babylonian magick system that really is probably not necessary (and probably not constitutional, etc., etc.). That’s a whole ‘nother story, however.

For me it eventually became clear that part of my helping to “dissolve the matrix”, was to actually file the papers and pay… while, at the same time, imbuing those papers and payments with “Light, Love, and High Vibration Matrix De-gluifier”. I felt my part was to do this from within the matrix system. And to send it in with absolutely no bitching, moaning, or complaining about the “terribleness” of the whole tax system, as well as without any particle of fear (of repercussions, or losing the money, etc., etc.)…

I will give no more of my own personal experiences with this, except one… when at one point I had chosen to send in the “not pay taxes” papers, I drove down to Pu’uhonua o Honaunau (Place of Refuge), but I got the “wrong” street, and ended up driving the “wrong” way, on a one-way street. Immediately I got the message… what I was considering (the “not pay” option) was not mine… namely, I was headed the “wrong way” (for my path, at least)*.

So something about the “not pay” was not for me. And lots of deals may be involved with that. It’s not “mine” to figure those out. Just to follow that which I consider as, “Higher Inner Guidance”.

So that’s kind of what brought out that “Every ‘Thing’ in ‘the Life’ has its Time and Place” part of the title. At some point, the “not pay” option may be the deal I will follow. But right now, in this now moment, that option is not for me.

* (there were some other strong signals I received, including a dream where I had chosen the “not pay”, and found myself in a whirlpool, being spun around, my face barely above the water, barely able to breathe)

After all the skullduggery and outlandish storytelling concerning the ghosts Stephen Paddock and Jesus Campos, readers should take heed that this is nothing new. We’ve seen this rodeo before.

Peruse these Google images and tell me if you see a single photo of anything indicating a real crime in Charleston at all, let alone one of this magnitude? No – after all this time all you really see is an emotional spectacle.

Next let’s play a game called “What are the Odds?” First off, the deceivers must have had a good laugh with the name of the “gunman,” Dylann Storm Roof. Seriously? Does Dylann with a southern drawl sound like da lyin’ (“the lying” in plain English)?

“Storm Roof” was quoted as saying, “I have to do it. You rape our women and you are taking over our country. And you have to go.” So who exactly has to go and where? A pastor and a group of elderly and middle-age black church ladies at a prayer service? Seriously?

What are the odds that even the most vicious white racist on the planet would go out in a blaze of glory with this set of victims and in a church? What does this have to do with rape and take overs? On a scale of one to Mandalay Bay – Dylann Storm Roof is a Mandalay.

And what of the “Storm Roof’s” presentation? This is right out of Stereotyping 101. First we get a little twist, as it seems “Storm Roof” is some how tuned into the Rhodesian apartheid badge-collection scene, which he is seen wearing in a “sober pose.” It looks right out of a Dave Chappelle white power  skit. Maybe the script writers thought a swastika or a Hitler Youth pin would have been too in your face, so they used something a bit more subtle. Come on deceivers, is this all you got?

That’s right, they knew all about “Storm Roof” and his badge collection days before the shooting. But never fear, the hoaxsters go into their tool kit to pull out the stereotypical Confederate flag ploy (license tab). Here is “Storm Roof” in green glasses looking a bit crazy or comical, take your pick. I choose comical.

“Storm Roof’s” Facebook page had 79 friends, about a third of whom were black. Did “Storm” wake up Tuesday and down some spiked coffee ala Sirhan Sirhan, then turn into a serious racist killer with a special hatred of little old black ladies and churchgoers, as opposed to a mere badge collector with lots of black Facebook friends? Yes, like Paddock- all a big mystery.

Next, the media criminals decide suddenly to outdo themselves and attack poor downtrodden millennials in a WaPo opinion piece called “Charleston, Dylann Roof and the Racism of Millennials.” This one reeks of Hillary re-education “fun camps”. Then came “Dylann Roof is America,”a ridiculous narrative by an in-house race baiter for liberal think tank Altnet. “To pretend to be surprised is to be compliant,” it claims.

So let me see if I got all this straight: A young morose-looking white guy named “Storm Roof” goes into a prayer service, accuses the devout of being involved in the raping of white women and shots old church ladies and pastors? And we shouldn’t “pretend to be surprised” about this? Really?  I think your rag of a publication is what’s compliant, and criminally so. Fuck you and the horses you rode in on.

And what are the odds that other organized games continue on from there? Turns out Hillary “Fun Camp” Clinton was just a half mile away during the shooting, attending a fundraiser.

And you won’t believe it, but it just so happens that neocon ZOG Sen. Lindsay Graham’s niece Emily chimed in to say that she “went to school” with “Storm Roof.” The little script she recited: “He was quiet, strange, very unsocial and everyone thought he was on drugs.”

We’ve never heard much out of Dylann’s Storm Roof’s mouth. Finally his arrest interview was released. We analyzed it and it too on a scale of one to Mandalay Bay – is a Mandalay.

By sheer coincidence the offensive against Confederate symbology went ballistic after this staged deception. The fraud Storm Roof all but single-handedly killed the Confederate flag. 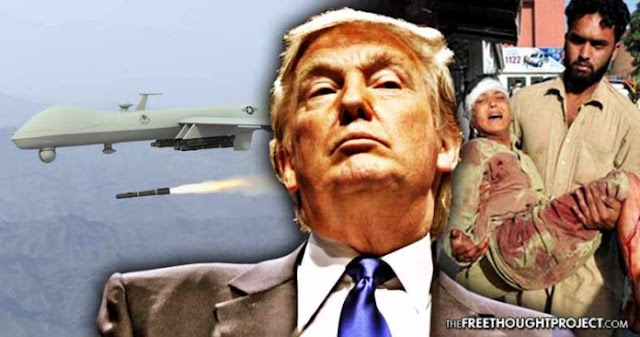 (Rachel Blevins) While the mainstream media focuses on anything but the current state of U.S. intervention in the Middle East, the Trump Administration is breaking records by accumulating a horrific number of civilian deaths.
Read more »